When I shared an early draft of A Season for Killing Blondes, a beta reader complimented me on my use of red herrings and suggested the title could also be considered a red herring.

Puzzled, I asked for clarification.

She explained, “A red herring is a literary device that leads readers toward a false conclusion. Glancing at the title, I expected to read a thriller about a serial killer who had designated a specific time period for the Rampage.” She winked. “That’s definitely not the case here.”

A bit worried, I wondered if I was misleading my readers. Would they expect a thriller and be disappointed when my novel turned out to be a cozy?

She assured me that the title was well-suited to a cozy mystery that featured a brunette lottery winner as the primary suspect and four dead blondes killed during a two-week period. And she doubted that anyone would be disappointed at the end.

After our conversation, I decided to do more research into red herrings.

Several theories exist regarding the origin of the expression. Some believe that it refers to the use of a kipper (strong-smelling smoked fish) to train hounds to follow a scent. Another theory points to escaping convicts who used red herrings to throw off hounds in pursuit.

Many of the plots in Agatha Christie’s novels contain red herrings. In And Then There Were None, we assume a character who goes missing is the killer. Later, when his body is washed up onshore, we realize that his absence was a red herring that misled the other characters and the readers.

In The Da Vinci Code, Dan Brown expertly uses the character of Bishop Aringarosa as a red herring throughout the novel. While reading, we can easily imagine him as the mastermind of the church conspiracy and are surprised when the real culprit is revealed. Intrigued by the bishop’s unusual surname, I probed further and learned that “Aringarosa” translates into English as “red herring.”

Another famous red herring example appears in The Final Problem by Sir Arthur Conan Doyle. While walking through the Swiss mountains with Sherlock Holmes, Dr. Watson receives a message that an Englishwoman at their hotel is in urgent need of health care. He rushes back to the hotel and discovers there is no Englishwoman. The message was a red herring sent by the villain Professor James Moriarty as a ruse to isolate Sherlock Holmes at the edge of a cliff.

To keep my readers guessing while reading A Season for Killing Blondes, I introduced a gaggle of suspects, among them a yoga teacher with anger management issues, a lecherous photographer, two “50something” mean girls, and fourteen ex-boyfriends.

From the reviews, I gathered that I had succeeded in maintaining the readers’ interest until the final chapters. My favorite comes from The Romance Reviews: “A well-written, character-driven murder mystery that genuinely had me scratching my head until the very end wondering who dun' it!?”

Do you have a favorite red herring to share? 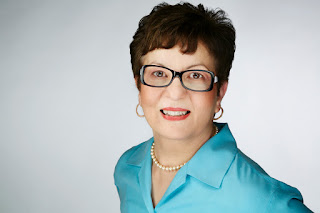 In 2008, Joanne took advantage of early retirement and decided to launch a second career that would tap into her creative side and utilize her well-honed organizational skills. Slowly, a writing practice emerged. Her articles and book reviews were published in newspapers, magazines, and online. When she tried her hand at fiction, she made reinvention a recurring theme in her novels and short stories. A member of Crime Writers of Canada, Sisters in Crime, and Romance Writers of America, Joanne writes paranormal romance, cozy mysteries, and inspirational literature from her home base of Guelph, Ontario.
Links
Website: http://joanneguidoccio.com/
Amazon Author Page: http://is.gd/MRa086
Posted by E. B. Davis at 12:00 AM

Thanks for hosting me. :)

Thanks for sharing with us and our readers.

Welcome to WWK, Joanne. Thanks for the fascinating insight into Dan Brown’s little word play.

Welcome to WWK, Joanne. I liked the reason these false hints towards a killer are called red herrings. As for listing my favorites, that's totally impossible since although I'm an eclectic reader, mysteries are my favorites, and I read too many to remember any favorite red herrings. However, I always make a point of using red herrings in my mysteries, and I often have readers telling me they couldn't figure out who the murderer was. One thing that is important in writing mysteries is to include clues to the actual killer, too. I hate those books that at the end, there were no clues that pointed to the murderer. I don't think that's fair for those of us who like to try and solve the mystery before they are revealed.

I think there was a Mythbusters episode where they attempted to prove (or disprove) the "red herring" theory with a hound. The hound stopped to eat the red herring, but then continued on to seek the original quarry.

I enjoyed your post and the history of red herrings. I agree with Gloria's comment above that clues to the murderer are important for problem solver readers. What fun to read - especially when a twist shows I've picked the wrong suspect!

Jim, When I learned about the wordplay, I wondered if anyone else had caught it. While reading the book or watching the film, I imagine many of us were too engrossed in the storyline and didn't bother checking the unusual name.

Gloria, It's easy to become so concerned about dropping false clues and pay little attention to creating valid ones. Thanks for dropping by. :)

Hi K.M. Thanks for sharing information about the Mythbusters episode. :)

great essay! I love finding red herrings in books and movies. In my own books, I'm careful to insert both, though I try to include more clues about the real murderer. Kathleen, great info about Mythbusters.

Thanks Margaret! It's important to take care with those red herrings and not confuse the reader with too many false clues.

Yes, I remember those red herrings in A Season for Killing Blondes! Well done. Always interesting to hear a fellow writer's take on a classic mystery device. As you say, it needs to be done with a light touch so as to mislead slightly but not over do it.

Thanks Mahrie! That light tight is so important and makes all the difference, especially with cozies.