The Road: My Life With John Denver - A Review by Shari Randall 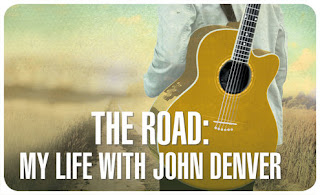 This past week I attended a play at the Ivoryton Playhouse in Ivoryton, CT. The intimate, charming 284-seat theater is a great place for catching new plays that might someday make their way to Broadway.

The show was The Road: My Life With John Denver. A picture of John Denver, that round face, those granny glasses, that laid back Colorado vibe, seventies mellow, beamed down on the stage.

Now, John Denver is perhaps not my first choice for musical theater – I’m more a Rent or Wicked girl – but the show had significant charms. When I took my seat in the balcony, I expected to be entertained. I didn’t expect to be surprised.

The play follows the journey of a young man, a novice musician from the 1970s Colorado music scene. He meets Denver, who invites him to join his national tour. As they travel on the road, the young man’s life parallels Denver’s: he meet a young woman, falls in love, marries, has a family, all while dealing with the stresses, challenges, and addictive joys of performing for several years in 53 shows in 50 days. In the end, both of their marriages break under the stress of life on the road.

I’ll leave the merits of the show to the professional critics. I enjoyed it, though I would have liked a shorter first act. The audience sang along to the familiar tunes with gusto and it was easy to get caught up in the joyful vibe.

But the play changed one thing for me in a big way. Hearing Denver’s lyrics in the mouths of other singers gave me a new appreciation for Denver’s songwriting talent. I learned that one of his first songs was performed by another group, Peter, Paul, and Mary, who had a hit with “Jet Plane.” I’m sure you’ll be humming along if I just type the words, I’m leaving on a jet plane.

One of the strengths of the play was the decision to have a woman sing several of the songs, especially Denver’s famous love song to his wife, “Annie’s Song.” This choice switched up the audience’s expectations and brought into focus that this is not just a beautiful song from a man to a woman, but a song for any lovers. Not just a song for one particular person, Annie, but for anyone. As the amazingly talented Katie Deal sang the familiar lyrics, the song sharpened into focus. The poetry of the words and the beauty of the emotion revealed power in music that I’d considered just feel-good oldies.

I thought of the old saying: A poet but didn’t know it. I left the theater impressed by the talent and artistry of John Denver. Really.

Are you a theater fan? Seen any good shows lately?

Haven't seen a show in years, but how wonderful this one sounds. John Denver was a particular favorite of mine. They tell me that musically, he was nearly perfect. For me, it's not the music, but the poetry and depth of his lyrics that bring me back time and again. The stories his lyrics tell trigger images and stories in my mind. Few did it better.

The best songwriters are wonderful poets. They capture the essence of emotion and place and time and they invite us to join in.

We regularly attend musicals and opera productions at the U of Cincinnati CCM, most recently "Lysistrata Jones," a musical about the Athens University basketball team. The undergraduate singers (who also performed dance numbers worthy of Broadway) created a blockbuster performance. It was in a studio theatre in the round with a basketball court in the center.

John Denver performed at my sister's college, St. Olaf, before he became famous. They loved him.

We have a local professional summer theater, and every year enjoy several of the shows. There's something about a live performance that gets lost when viewing it another way.

Hi Kait and Jim, you would love the show, especially the way the lyrics underscored the story. The first two lines of "Rocky Mountain High": "He was born in the summer of his 27th year, coming home to a place he'd never been" - that's the theme of thousands of novels, encapsulated in just a few words. Wonderful.

Hi Margaret: That sounds like a wonderful show! Isn't it great to live close to great live theater?

Hi Kathleen: I'm with you on that. Live performance is the way to go - the intimacy, the sense of losing yourself and all distractions make the live performance a more powerful experience.

Shari, I go to local community theaters often. I love them. Only occasionally to they put on musicals, though. Probably because of my age, I'm a big fan of the singers of the 60s and 70s, especially the folk singers. I have stacks of their DCs and even more cassettes which I don't listen to as often anymore. I loved John Denver and since reading this blog, I think I'll order a CD of his best music to add to my nightly listening. "Country Roads" was one of my favorites. A nurse my youngest daughter worked with was his girlfriend for a few years before he died.

Make that CD's. It's been a busy and frustrating day.

Sorry you had a frustrating day, Gloria. Hope you get some quiet time to listen to some great music.

In the last few years, I've paid closer attention to lyrics and songs. I am in awe of singer-songwriters who can tell a complete story in a few lines.

The show sounds great. I haven't listened to John Denver in years, but he was a staple in my childhood.