Revision and the five senses

I live in a small town, population 5,000, ideally located between two cities: Kansas City, with its seemingly unlimited options for dining and nightlife, and Lawrence, a quirky, vibrant college town (rock chalk!). By comparison, our little town is quiet and its amenities limited.

But a few months ago, a young couple took over an empty, historic hotel near downtown and transformed it into a terrific little bar. Hand-crafted cocktails. Jerry Reed and Dolly Parton on the iPod-powered sound system. A fire pit outside for chilly nights. The bar is steeped in atmosphere and is the place to be. It’s also an excellent place to eavesdrop, which I do shamelessly.

One night, as my husband and I enjoyed a cocktail, two women sat down next to us. One ordered a bar specialty that required fresh fruit, house-made bitters, high-end liquor, and a trendy over-sized ice cube. The other woman ordered simple sparkling wine. We all watched bartender Jesse put together the first drink with flair and care. Then he asked Woman No. 2 whether she liked her wine. “Oh,” she said, “I have no sense of taste or smell. I just like the bubbles.” 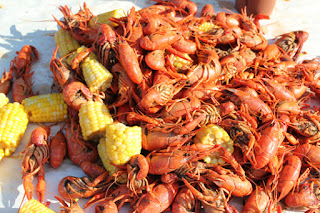 I may have gasped audibly. Among my greatest joys in life are bread fresh from the oven, a spicy crawfish boil on the Fourth of July, and the scent of spring in the air after a long winter.

At one of the first writing conferences I attended many years ago, I had the good fortune to hear Nancy Pickard—best-selling author, a founding member of Sisters in Crime, and one of the most generous people you’ll ever meet—describe her approach to polishing a manuscript. One of my take-aways from her talk was this: Ensure that all five senses are present in your writing, in every scene.

Nancy is very smart about writing and she gave much more good advice that day, but the bit about weaving sensory details throughout your story stayed with me, in part because I never get this right in the early drafts. The sights and sounds and, especially, smells often come later for me, in revision, along with wordsmithing and fine details.

Here’s an example, from  “Fractured Memories,” a short story published last fall in the Flash and Bang anthology from Untreed Reads:

Early version:
Keith awoke on the couch in the library with the kind of massive headache that in his younger days indicated he’d had a helluva good time yesterday. Today, it just meant he’d survived another Fourth of July party.

He swallowed experimentally. Mouth felt candy-coated, crackled when he closed it. Crink in neck where he spent night mouth wide open breathing in/out. God, he was such an idiot. 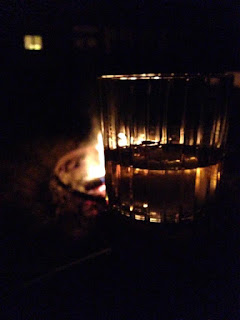 Keith clamped his jaws together. The inside of his mouth crackled as the dried sugary residue that coated his mucous membranes shattered into tiny shards like broken glass.

Good lord, how much bourbon and Coke did he drink last night? He had the massive headache that in his younger days meant he’d had a helluva good time. Today, it just meant he’d survived another of Andrea’s legendary Fourth of July parties.

The first version describes Keith’s hangover in detached, dull, almost clinical terms. In the final, I tried to evoke feelings in the reader, to create a connection for anyone who’s overindulged and suffered the consequences.

I suppose if I lost my sense of smell or taste, I would eventually learn to make up for it with other senses: The feel of bubbles on my tongue instead the bitterness of hops or the tartness of fresh cherries muddled in the bottom of a heavy shammed rocks glass. But in writing? Take away any of the five sense and the scenes fall flat and lifeless. A lesson I re-learn every time I revise.

Posted by Julie Tollefson at 12:00 AM

I keep track of the number of senses for each scene other than sight, which is nearly impossible to miss. I insist on at least one other sense per scene and prefer two more. I rarely hit all five senses in a scene as taste is tough for me to find any reasonable use in most scenes.

Good advice! I was reading a new anthology and noticed the most popular and experienced author used all the senses in her story. It made the story visceral and increased the tension--one of the few stories that captivated me.

Using all five senses is on my revision checklist. I frequently write about food, the preparation and consumption, which makes it easier, as does writing about gardens. Describing the scent of summer rain hitting an asphalt street? Frustrating.

Jim - I'm curious, do you keep a scene-by-scene tally for senses, then? And do you try to be somewhat even-handed throughout the manuscript?

EB - I totally agree. Appeal to different senses draw me into the story every time.

Margaret - I think I need a checklist. I keep a list of problems I know I need to fix and I'll review manuscripts with certain goals in mind (increase micro-tension, consistent character voice, etc.) but I don't have a master list of things to check in every story.

Julie -- I write in Scrivener and keep track for each scene there. I don't try for even-handedness. The more scenes I can pack in the better -- but only if they make sense. When I am about to rewrite a scene, I note what senses are missing so as I do the rewrite I am primed for opportunities to add others.

Senses do make a story come alive. I usually use a pretty bare-bones style, and I think keeping a checklist is probably a good idea.

It's easiest when I'm so immersed in a scene I can almost smell, hear & taste things. I don't use touch nearly enough.

Julie, we had Nancy Pickard at one of our writing workshops last fall. She was amazing. I try to include different senses throughout my books, but since my main character doesn't like to cook, I'm a little limited there. However, she does like to eat so I do bring in the sense of smell and taste. For me, there is no sweeter scent than lilacs in spring, some roses later, or the smell of bread or other yeasty things baking. A turkey at Thanksgiving or Christmas is also a wonderful smell. I'll be going through my final edit of book seven shortly, and I'll be looking for more ways to add the sense of taste and smell.

Thanks, Jim. That makes sense (ha!). I write in Scrivener, too, and love all the neat things like that you can do with it.

KM - I think the sense I have the most trouble including is smell. I need to work on it!

Gloria - I love lilacs! In college, I lived on a street called Lilac Lane - lined with lilac bushes. It was wonderful. I'm fortunate that Nancy is the founder of our local Sisters in Crime chapter. I've learned so much from her.

One of the side effects that they did a lousy job of warning my wife about with chemo is that she could lose all sense of smell and taste for weeks at a time. Everyone talks about nausea, but nobody mentions about how one may lose smell and taste for long periods.

Oh, Kevin, I didn't realize that was a possibility. Cancer sucks. Best wishes to your wife, and thank you for stopping by.

I'm a big proponent of using all five senses, too, although I wouldn't try to get taste into each scene, personally. I think it looks too obvious when you can't artfully weave it in. However, lack of a sense could be a reference to that sense, too, like having a woman who couldn't taste wine. Or a lack of any other sense.

Kaye - good to see you here! I agree that getting taste in EVERY scene could be challenging. I suppose references could be oblique, maybe in the form of metaphor - something like "her disappointment was a bitter pill to swallow" only more elegant and creative. :)