My friend Sam cheated death before. He had a bad heart, inherited from a loving dad who died way too young. For twenty plus years, I’ve watched Sam deal with a frightening diagnosis, be told “there’s nothing else we can do,” and suffer the highs and lows of waiting for a transplant. I remember during one hospitalization over ten years ago, I prayed that he live long enough to help his kids grow up and remember thinking that was a long shot. I’ve never been so happy to be wrong—his oldest is heading to college this fall.

Last year, he dealt with a failing heart and kidney malfunction, but damn if he didn’t come back from it. He hated the idea of dialysis and miraculously escaped it. His body failed, but his spirit never did. He kept smiling. Kept focusing on the positive. And kept making us laugh.

A few weeks ago, he had a bad heart attack. While in Cardiac ICU, his heart stopped five times, in something called a “ventricular storm.” I saw him when he was barely awake, surrounded by so many tubes and machines it looked like a sci-fi movie. I held his hand and quietly thought, this is it. When I got to my car I burst into tears.

But Sam wasn’t done. Dang fool rallied once again. He stayed alive the weekend, and the next day and the next day, and we all shook our heads at the miracle that was Sam. When I visited him again, he was sitting in a chair smiling, and his wife talked about plans for when he left the hospital. I told him the title of his next book would be Ventricular Storm.

They were prepared to step him down from CCU when it happened.  Sam’s sweet old heart stopped again, and despite valiant medical efforts he didn’t revive. When I got the 6 AM text from a friend, “call me now, IMPORTANT,” I knew.  That this happened on April Fool’s Day seemed a cruel, yet oddly fitting, joke.

My little writing community in Columbia, SC is grieving the loss of Sam Morton. We’re sharing stories and photos on Facebook. We email and text one another. We are planning our own gathering to celebrate the life of this friend. 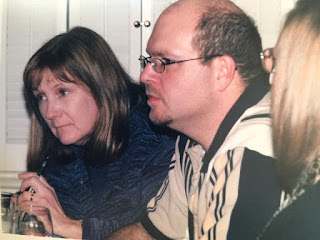 Me and Sam in writer's group. We were rarely this serious!

And my fellow Writers Who Kill bloggers also miss him. He was a regular contributor to the blog, known for his humor and honesty.

I will never forget Sam Morton. Cop, wrestler, communications director, and campaign speech writer. Father, husband, and friend to so many.

But to me, he was a critique partner, cheerleader, and funny-as-hell writer. The one who said, “They rejected you? Then they are full of shi@t.” when I needed to hear it. And said, “You might find a better resolution to this subplot.” when I needed that, too. 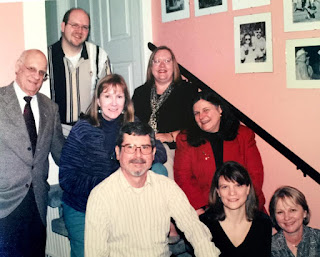 Thank you, Sam, for the ten extra years we might not have had you. Thank you for your amazing spirit and ability to laugh at yourself (and me). You stayed with us as long as you could, but now you’re way above us, cracking jokes and hoping we all don’t grieve too long.

And here on earth, there’s a part of you still with us—your words. We will have them forever, and there’s some comfort in that.
Posted by carla at 12:00 AM

I knew Sam had serious health issues. I didn't know he'd inherited the problem. Although I didn't know Sam well, we had a running joke we tossed back and forth. He was the mountain man and I was the beach chick. It was fun, and I "got" his sense of humor.

A few months ago I found out that a friend of mine from college had died the previous year. He helped me through a turbulent time in my life. I was grateful for his support, sorry we hadn't been close for years, and remember him fondly.

My problem with Sam's and my friend's death is that I still think the best is yet to come. Perhaps I'm too much the optimist, but I feel sad for all that they will miss in the latter part of life and all we will miss due to their absence. Our loss is everyone's loss. They were good men.

I only knew Sam electronically. I had hoped to meet him a couple of different times, but health issues kept him away. From everything I have heard (and now read) about Sam, the loss was mine.

I've learned that others are only truly gone when we stop telling stories about them. I have a feeling Sam will live a long time.

Thanks, Carla, for this wonderful remembrance. Sam's influence, through his writing and his personality, is a mighty force that will long endure.

What a wonderful remembrance. Like Jim, I knew Sam only electronically, but he had a vitality and humor that pulsed through the ether. The world is a poorer place.

This resonated. Thank you so much for sharing, Carla. He'll stay in our hearts and our stories-- for us, tied closely together.

Thanks for the kind words, y'all. Each of us have losses we must face, some easier than others. Sam was one-of-a-kind, a "might force" as Paula said. I hope he continues to "pulse through the ether" as we remember him, and laugh at his jokes, and read his words.

Thanks Carla, for the beautiful remembrance of Sam. I only knew him as a fellow blogger, but wish I could have gotten to know him in person. Such a special and beautiful person, he was, or should I say is because he's living on in the memories of those who knew him. And because I believe in an afterlife, I know he's watching over all those who cared about him.

What a wonderful remembrance, Carla. Sam was one of a kind, that's for sure. I always enjoyed his posts. The joy he took in his family and his writing jumped off the page.

I got to see Sam in person once in addition to knowing him electronically. He was truly memorable. He will live on in the memories of those who knew and loved him.

A great tribute for a great man. We will miss him.