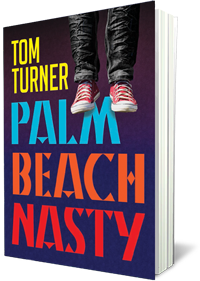 Little known fact: every copywriter thinks he/she has the great American novel in him/her.  And, in reality, there's evidence to support this: At least six well-known authors penned jingles or ads before going on to publish novels, and one of them, F. Scott Fitzgerald, has a strong claim for actually writing the GAM. (That was a few years after he got a raise for his memorable line for the Steam Laundry Company of Muscatine, Iowa, “We keep you clean in Muscatine.”)

So with former copywriters Salmon Rushdie, Dorothy Sayers, Dom Delillo, Joseph Heller, Helen Gurley Brown and Fitzgerald as my inspirations, I got a job with BBDO advertising in New York at the age of twenty-five. That was after my first foray into the workforce, where, miraculously, I talked myself into a job as assistant manager of The Jolly Green Joint, a bar/ nightclub in Manchester, Vermont (later to become an off-ramp of Route 7.) My time at the Joint was highlighted by heart-to-hearts with all manner of rambling drunks, breaking up bar room brawls and auditioning countless rock bands to play on our cramped 20-square foot stage.
So after four years and way too many cocktails, I moved on to Madison Avenue, where I spent the next ten years aspiring to top Fitzgerald's Muscatine line. (Kidding aside, copywriting does force one to cut the fat, grab readers’ attention and hold onto it like a dog with a bone.)  While at BBDO, I got hooked on mysteries and thrillers, and started to write a crime novel.  Then after ten years of extolling the virtues of Canadian Club and Cottonelle toilet paper, I moved to Florida to write.
Only problem was, I had about a thousand dollars to my name. Finally, on the verge of starvation, I landed a job as thirty-five-year-old trainee at ConTop Investigations, which billed itself as a "private investigation and surveillance agency." Turned out, though, what that really meant was they specialized in catching cheating spouses in hot-sheet motels. Scrambling to avoid becoming—literally—a Peeping Tom, I told the boss I was really bad with cameras, and he bought it. The result was he put me on background checks and pre-employment screenings. Not exactly what Dashiell Hammett cut his teeth on as a Pinkerton agent. Nevertheless, some of the things I saw and heard fill many pages of my novels.
From there—God knows how—I ended up in no-money-down real estate speculation just across the bridge in tony Palm Beach. Wow, talk about material! Glitz, glam and beautiful people. Sure, there are also a lot of hard-working  Average Joes there—but, fortunately, for a hungry writer—a ton of rich people behaving badly, too. We're talking maliciously, greedily, hedonistically, treacherously, pick your adverb, people. You'll find it all in my first crime novel, Palm Beach Nasty, and—coming soon to a bookstore near you—its sequel, Palm Beach Poison.
In conclusion, I have no conclusion. Except, writers write what they know, what they make up, or a combination of the two. My life experiences in four radically different lines of work provided me with rich material, which I’m thankful for. But, let’s face it, somebody armed with just a fertile imagination can do pretty well for themselves. I’ve got six more names for you: Steven Crane, S.E. Hinton, Bret Easton Ellis, Rimbaud, Alexander Pope, and Mary Shelley.

For more information on my books, please go to: http://tomturnerwrites.com/
Posted by E. B. Davis at 12:00 AM

Gee, and I only was my high school newspaper editor, and still managed to write books. Interesting story, Tom.

What a resume! I wrote advertising copy for a real estate firm until I ran out of gas trying to describe the same tract house over and over again. And then many jobs later, I dealt with interior designers and their customers, which I am mining for my novels. Gold faucets and black velvet wallpaper, and so much more.

People living on the edges of society aren't often given a positive position in fiction (although of course there are exceptions--Les Miserables comes immediately to mind)and I like to provide them with a voice. Some of my background does provide fodder for my stories. I also have "experts" I can ask when I need to delve deeper into situations, like asking a convicted murderer "What did it feel like when, at age 17, you were facing the death penalty?" or my fellow blue collar workers, many of them illiterate, because the steel fabricator I worked for was known to hire machine operators who couldn't read but were willing to work hard.