The Story of Willie Sutton - sort of 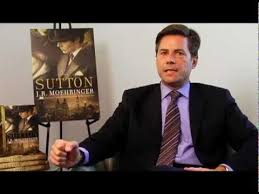 Last week my Third Thursday’s book club discussed the book SUTTON by J.R. Moehringer. The author noted at the beginning that when Willie Sutton was finally released from prison on Christmas Eve 1969, he only granted one interview to a reporter the next day. The reporter and the photographer and Sutton are now gone, and as he said, what happened that day and in the preceding years is anyone’s guess. So he wrote a fictional account of Willie Sutton’s life with what facts he could find.  He added sections in italics about Willie the day after he was released with the reporter and photographer. He ends the beginning comment with “This book is my guess. But it’s also my wish.”

Some background from Wikipedia – which also gave a disclaimer that all facts might not be true.

Willie Sutton was born June 30, 1901 into an Irish-American family in a Polish
neighborhood in Greenpoint, Brooklyn. He was the fourth of five children, and did not go beyond 8th grade of school.  He turned to crime at an early age, though throughout his professional criminal career, he did not kill anyone. Described by Mafioso Donald Frankos as “a little bright-eyed guy, just 5’7” and always talking, chain-smoking.” Frankos stated also that Sutton “dispensed mounds of legal advice” to any convict willing to listen. Inmates considered Sutton a “wise old head” in the prison. 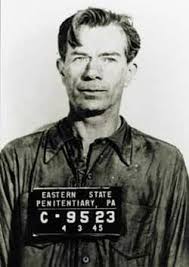 Sutton was an accomplished bank robber. During his forty-year criminal career he stole an estimated $2 million, and eventually spent more than half of his adult life in prisons from which he escaped three times.  For his talent at executing robberies in disguises, he gained two nicknames “Willie the Actor” and “Slick Willie.” He usually carried a pistol or a Thompson submachine gun. “You can’t rob a bank on charm and personality,” he once said. In an interview in the Reader’s Digest published shortly before his death in 1980, he was asked if the guns that he used in robberies were loaded. He responded that he never carried a loaded gun because somebody might get hurt. He stole from the rich and kept it, though public opinion later turned him into a perverse type of Robin Hood figure. He allegedly never robbed a bank when a woman screamed or a baby cried. 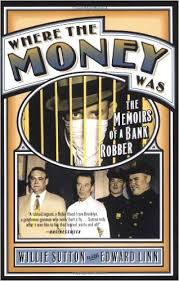 After his first escape from prison, eventually he was captured and recommitted in June 1931 and charged with assault and robbery. He did not complete his thirty year sentence because he escaped on December 11, 1932, using a smuggled gun and holding a prison guard hostage. With the guard as leverage, Sutton acquired a forty-five ft. ladder to scale the thirty ft. wall of the prison grounds.

On February 15, 1933, Sutton attempted to rob the Corn Exchange Bank and Trust Company in Philadelphia. He came in disguised as a postman, but an alert passerby foiled the crime. Sutton escaped. Less than a year later, he and two companions broke into the same bank through a skylight.

According to an FBI record “Sutton also conducted a Broadway jewelry store robbery in broad daylight, impersonating a postal telegraph messenger. Sutton’s other disguises included a police officer, messenger and maintenance man. He usually arrived at banks or stores shortly before they opened for business.” 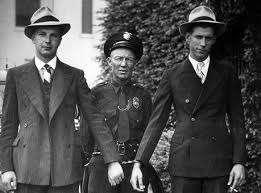 Willie Sutton was apprehended on Feb. 5, 1934 and sentenced to serve 25 to 50 years in the Eastern State Penitentiary in Philadelphia for the machine gun robbery of the Corn Exchange Bank. On April 3, 1945, he was one of twelve convicts who escaped the institution through a tunnel. They were recaptured the same day.

Sentenced to life imprisonment as a fourth time offender, Sutton was transferred to the Philadelphia County Prison, Holmesburg section. On Feb. 10, 1947 Sutton and other prisoners dressed up as prison guards. The men carried two ladders across the prison yard to the wall after dark. When the prison’s searchlights hit him, Sutton yelled “It’s okay!” No one stopped him. 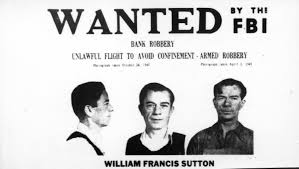 In February 1952, Sutton was captured again. He was convicted of another bank robbery, and sentenced to a sentence of thirty to 120 years in Attica State Prison. However, in December 1969, his lawyers managed to get him released because of his good behavior and his deteriorating health due to emphysema. At his hearing he said, “Thank you, your Honor. God bless you” and wept as he was led out of the building. In 1970 a separate 30-years-to-life handed down in Brooklyn in 1952 was also commuted on similar grounds, and he was released on parole. 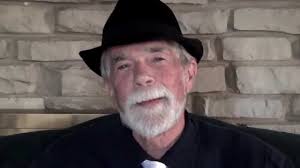 After his release Sutton delivered lectures on prison reform and consulted with banks on theft deterrent techniques.  He was supposed to have said when asked by a reporter why he robbed banks. “Because that’s where the money is.” He denied saying that and in his autobiography, he said if anyone had asked him, “Why did I rob banks? Because I enjoyed it. I loved it. I was more alive when I was inside a bank, robbing it, than at any other time in my life. I enjoyed everything about it so much that one or two weeks later I’d be out looking for the next job. But to me the money was the chips, that’s all.”

These facts came from Wikipedia and we’ve all heard that not everything can be believed there. However the basic facts are true. 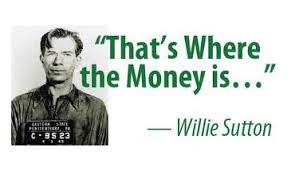 The book is another story, and it’s referred to as a biography on Wikipedia, but even Moehringer, admits it’s largely fiction based on facts. What one of my fellow book club members called faction. Everyone in my book club enjoyed it and fell in love with the Willie in the book. We agonized over the brutal treatment he often received by police and prison guards in those years when it was overlooked, although apparently there was at least one warden who seemed to like him. That Moehringer had become fond of the Willie Sutton he’d extensively researched was obvious. When the book ends, we were wondering how much was true and how much was invented by Willie or the author. That Sutton was an avid reader who loved books of all kinds I believe to be a fact Moehringer learned from Sutton’s biography and probably from other resources he read, too. What the author emphasized was the times Sutton grew up in, with banks failing, people out of work, starving, and the hatred most people had for the banks and bankers, which they blamed because they lost all their savings. Thus it made sense that much of the time, Willie Sutton was considered a hero by many people at that time.

What do you know about Willie Sutton or other outlaws?


Do you think you’d like to read the book?
Posted by Gloria Alden at 12:00 AM

I have to admit that armed robbers don’t much interest me. I’m more attracted to those who use brains rather than brawn or guns. That probably explains why I read and write about financial crimes.

Jim, I'll admit that I didn't want to read it because didn't think I'd like the book, either, but I did find it fascinating in the end.

KM, it was an interesting book, probably because the author had gotten so interested in his story that he made the reader just as interested in the character.

Margaret, you are so right about him. I think you'll enjoy the book if you read it.

Warren, I think you would enjoy it.

My dad grew up in Yonkers, NY during the heyday of the gangsters. He always romanticized them and I think, secretly, admired them, so I heard a lot about Willie Sutton, Dutch Schultz and the like. It was a fascinating era.

Kait, it was a fascinating time, and one I knew very little about until I read the book.