As darkness blankets the holy city of Charleston, South Carolina, Brack Pelton, an Afghanistan War veteran, steps out of a rundown bar after a long night. Before he gets to his truck, he finds himself in the middle of a domestic dispute between a man and a woman on the sidewalk. When a little girl joins the couple and gets hit by the man, Brack intervenes and takes him down. But the abuser isn’t finished. He pulls a gun and shoots the woman. Brack saves the little girl, but his world has just been rocked. Again.

The next day, while sitting on a barstool in the Pirate’s Cove on the Isle of Palms, his own bar, Brack scans the local paper. The news headline reads: Burned Body of Unidentified Hispanic Man Found at Construction Site. Nothing about a dead woman in the poor section of town. Brack feels a tap on his shoulder and turns around to see an eight-year-old girl standing behind him. She’s the little girl he rescued the night before, and she wants him to look into her sister’s shooting.

Violence and danger make up Brack’s not-too-distant past. Part of him craves it—needs it. And that part has just been fed. Things are about to heat up again in the low country. May God have mercy on the souls who get in the way.

David Burnsworth’s love of the South and Charleston, South Carolina, was evident in his debut novel, Southern Heat, in which he introduced some fascinating and memorable characters—ones that will have you anxiously awaiting each new book in his series. His latest book, Burning Heat, was recently released and is even better than his first.

In your first book, Southern Heat, we learn that Brack is a widower, still mourning the loss of his wife. Her loss has shaped his life in dramatic ways, and he talks about his vow to always protect the good and innocent. Do you think the loss of his wife has made him more empathetic than he might have been?

First of all, thank you for taking this time for me and for sharing this interview with your followers. This is a very good question. I’d say the answer is yes. Before his wife’s death, Brack’s life was what he would call perfect. He was a rising stock car racer, which was his dream, and he had the beautiful, supportive wife to share his upcoming success with. The next steps were kids and the mansion. And then his wife becomes terminally ill and within six months she is gone. She had been his foundation. In general terms, he did what I would have done in the same situation: he freaked out. I probably wouldn’t have gone to war like he did, but I would not have been good for anyone for quite a while.

Living through all of that changed Brack, I believe, for the better. He became less self-centered, although he is still working on that one. And he realized that life is hard, and sometimes bad things happen to good people. Because he understands this, he knows how far a helping hand will go at the right moment.

In Southern Heat, Brack becomes an amateur sleuth, forced to discover who murdered his uncle. At first glance that would put him in the traditional mystery category. However, it’s not long before his activities have him entering the thriller category. How would you categorize your books?

Southern noir mysteries with some thriller aspects. I like fast paced books and every author likes when a reader says that they stayed up too late because they couldn’t put their book down.

It’s been said that writers who can tap emotional responses to a place (loneliness, loss, fear, innocence, etc.), make those places come alive for readers. You’ve done that quite effectively with Charleston. What’s your secret?

Thank you for the compliment. I lived in Charleston at what I would call the right time in my life. I was still single, still finding myself. And I drank in the whole slow-paced, sultry low country lifestyle, along with more than my share of libations! I love everything about Charleston, both the good and the tragic. It is like no other place on earth, with its rich history, tropical weather, artistic culture and beautiful island beaches. I befriended many locals and experienced a lot of Charleston from their perspective, such as having tea with a little old lady in her front row Battery home to sitting on a rock barrier wall on Sullivan’s Island at high tide and getting a visit from a dolphin late one night who swam right up, raised his head out of the water and looked at me.

Southern Heat and Burning Heat show a side of Charleston most tourists don’t see. What would you say to readers who have never been to Charleston? 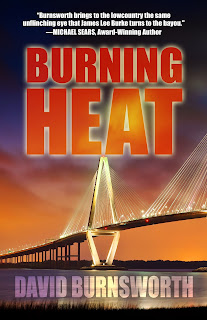 As beautiful as most of the pictures of Charleston are, they barely do it justice. And Charleston is rich in American history, from the founding of our country to recent events. Come to South Carolina and see for yourself. As for what’s not in the tourist books, part of my Charleston is changing. After the new bridge went in, the section of town where the old Cooper River Bridge used to dump travelers off into the city has changed. It used to be, shall I say, a unique part of town, one best viewed while passing through in your car at a speed slightly faster than the posted limit. I believe that part of Charleston is now experiencing a bit of gentrification.

Some characters are so outstanding that the writers who created them should be giving thanks for whatever inspired them. Brother Thomas is one of those characters—a man who helps bridge the gap between the races and social-economic classes in Charleston and someone you want to quote. Who inspired Brother Thomas? Have you known someone like him?

Some writers will say a character shows up and takes over. Brother Thomas is one of those characters. He started out as a minor character and became my protagonist’s living conscience. Brack would be lost without him. There is no one person who influenced Brother Thomas, but there are many attributes of people that I pieced together to form him. Brother Thomas and Shelby, Brack’s rescue mixed-breed dog, are the two most loved characters by my readers.

Uncle Reggie, Mutt, Brack, and other characters are military veterans. This common background gives them a special bond, even if they served in different forces and fought in different conflicts. What accounts for this?

I didn’t serve, but my father did as well as all of his brothers. I grew up in a home that respected and glorified our armed services. And I feel that Uncle Reggie, Mutt and Brack are more confident, better able to tackle life, and honorable men because they had served.

Which writers have inspired you the most?

So many. The big ones most have heard of: Elmore Leonard, James Lee Burke, Lee Child, Walter Mosley, Michael Connelly, Clive Cussler, Susan Boyer, Stieg Larsson, Hank Phillippi Ryan, and John Sanford. And some people should know more about like my friend Bob Strother.

Brack is involved in a number of gunfights in both of your books, and he easily purchases guns. Is it as easy as it sounds in your books, and, if so, does that concern you?

When I completed the final draft of Southern Heat in 2013, someone could go to a pawnshop, show a photo ID, and purchase a handgun. And attendees at gun shows could do so with even more freedom. I think today, 2015, is maybe a little different, but I still believe it is not too difficult to purchase handguns. My concern is not for the ease of purchasing them, but for law enforcement and what I perceive to be an eroded and warped view of the honorable and difficult jobs they have.

Your books would translate well to film. If that happened, who would you like to see play Brack, Brother Thomas, Mutt, Darcy, and some of your other characters? 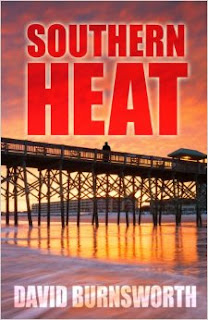 Brack is mid-thirties and six foot tall with dark hair and a deep tan. He is not a “pretty boy,” but women like him. In Burning Heat, he is described by one of the secondary characters as looking “so much like that guy from Mad Men that I call dibs.”

Brother Thomas is in his fifties, six foot three, and three hundred pounds. Like Brother Thomas, Mutt is also African American, about the same height, but more muscular and missing some front teeth.

Darcy, ten years younger than Brack, is described by him as a younger Elizabeth Shue.

To be honest, I haven’t been a steady movie watcher since I started writing. I’d be interested in whom readers of the series envision could play the characters.


Tell us about your journey to publication. Was it a bumpy ride?

Like most published authors, I have a drawer full of rejection letters. I will keep them forever. All told, I have twenty-four physical rejections, plus about that many more verbal and electronic ones. What would have happened if I had stopped at the forty-seventh rejection and quit? Persistence is one of the many things I have learned from my wife, Patty. Writing is more than talent. It is believing in yourself, having a thick skin, and finding the right person who will say yes.

What’s next for Brack, Brother Thomas, and your other characters?

I recently turned in the manuscript for the third book in the series. It departs from the first two in a few ways, which are going to be a surprise. Most of the characters return, and of course there will be a few new ones. I am really excited about what readers will think of the changes I’ve made. And I have begun working on book four.

Thank you, David, for joining us at Writers Who Kill.

You can learn more about David Burnsworth at his website:

Well, this is wonderful! Thank you so much for the wonderful shout out, you two! And this is such a great interview. I have so enjoyed watching your success, David! And cannot wait to see what happens next. Hurray!

Sounds like a great series! I enjoy a fast paced traditional mystery - definitely OK with me if there are thriller elements. But what is really intriguing is the way you describe Charleston. Another book for the TBR! Best of luck to you.

Welcome to WWK, David. Not only do your books sound interesting, I've added both of them to my to order soon. Great interview.

Charleston, what a great place for a thriller mystery...the architecture, Fort Sumter, the bridges and great food. Looking forward to reading it.

It sounds like Charleston is almost a character. I enjoy that sort of writing.

Great interview, Grace. This sounds like a dynamite series and needs to be on my TBR stack.

I've been a fan of David Burnsworth's fiction ever since I met him at Malice a few years ago. His writing is complex and nuanced, without sacrificing readability. I knew he had a new book coming out, and I'm pleased to see it. As soon as I finish this, I will go get a copy for my Kindle!