The word "Pawsitively" perfectly captures the qualities that shine in Liz Mugavero's work: originality, creativity, positivity, and a passion for animals. I'm so glad she stopped by WWK to talk about her current series, her new series, and her "furries."

Liz, tell us about the latest release in your Pawsitively Organic Mystery series. 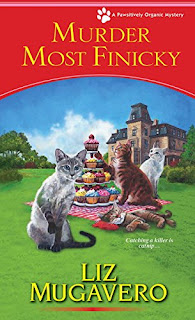 My newest book, Murder Most Finicky, is the fourth in the Pawsitively Organic Mystery Series. It was released on December 29, and in this installment, my protagonist Stan Connor leaves Frog Ledge on a weekend adventure to Newport, Rhode Island with a select group of gourmet (human food) chefs. Here’s the blurb:

The dog days of summer have arrived in the small town of Frog Ledge, Connecticut, and business is booming for Kristan "Stan" Connor. Her Pawsitively Organic pet food has even caught the attention of celebrity pastry chef Sheldon Allyn, who helps Stan open a fancy pet pastry shop in Frog Ledge. A partnership is born, and Sheldon invites Stan to Newport, Rhode Island, for an appreciation weekend he's hosting for all his independent chefs. But the gourmet getaway turns sour when one of the chefs turns up dead, and a second one goes missing. . . .

As Stan tries to figure out who had a recipe for murder, the pool of suspects expands. And if she can't sniff out the culprit soon, this killer may just serve up a second helping of murder. . .

I had a ton of fun writing these chefs. To prepare, I watched some cooking reality shows and envisioned a few characters that were even more over the top. Plus Stan’s family plays a bigger role in this book, and Nutty is traveling with Stan so there’s a whole lot of Maine coon cat love. Getting out of Frog Ledge opened the doors for new and different things too. I hope you have as much fun reading it as I did writing it!

You'll be kicking off a new series this year. Give us the details!

I’m working on a series for St. Martin’s Press tentatively titled the Cat About Town Mysteries. The premise is a cat cafe, which is a place where people can go to spend some time relaxing and playing with cats. The cats come from rescue organizations, so if anyone wants to adopt one, they can. Usually they’re affiliated with a human coffee shop, so you can have a cup of coffee while you’re spending time with the furries. 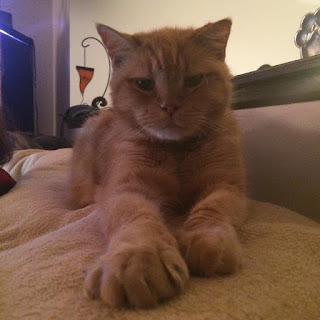 My cat cafe series will be located on a fictional island off the coast of Massachusetts, which is an interesting place for a cat cafe. My cat, Junkyard Johnny, is the muse for the story—he’s got a starring role in the action. And of course, there’ll be murder and mayhem! I can’t wait to share a launch date for this series, and I’ll be sure to let you all know when it’s coming out. It will most likely be sometime in 2017.

How do you manage to write two mystery series along with a full-time job? Any helpful suggestions for other writers doing the same thing?

It’s not as easy as it sounds…oh, wait, it doesn’t actually sound that easy, does it? I certainly don’t think I’ve perfected a technique or anything. I just try to stay really focused on what I need to do, and I’ve been trying to be better about my time management. With my new day job, I’m able to work from home more often so I’m able to spend that hour in the morning and afternoon when I’d usually be commuting on writing—theoretically. Some days that works better than others. I’d also like to say I work on one book at a time, but sometimes I get a flash of inspiration for the book I’ve set aside and feel like I need give it attention while it’s hot. It works for me to jump back and forth a bit, and I usually just pay attention to whichever cast of characters is talking to me at the moment.

Advice? I’d have to say be brutal with scheduling your time, and stick to it. I haven’t mastered this either, but I find that when I make the writing time a priority and schedule other things around it, I have better success than waiting until I’ve finished everything else that needs to get done and it’s nine at night and I haven’t written a word yet. That technique has brought me a lot of angst over the past year!

Your website has a page devoted to your writing crew - your furries. Are they your muses?

Absolutely. The crew on the website have all been part of the books, or will be in an upcoming book. My Maine coon cat Tuffy was the start of everything, and the inspiration for Nutty in the Pawsitively Organic series. In those books, Stan seems to find a new animal to love in every installment, so keep an eye out for new additions in the future! Visit me at lizmugavero.com

You are very active in the animal rescue world. Tell us a little about that work.

I’ve been doing cat rescue for about 20 years, and it’s been some of my most rewarding—and challenging—work. I started in New Hampshire, and was privileged to work with the best of the best there. I learned a ton and met so many amazing animals. Of course, I adopted some! Today, I don’t do as much hands-on as before (unless you count the mini-shelter in my house!) but try to help out in other ways. Social networking for animals that need homes, transports and donations are some equally impactful ways to contribute. In fact, I just collected almost 30 books from fellow authors to donate to the Pat Brody Shelter for Cats, a Massachusetts shelter near and dear to my family’s heart.

My newest project is #ProtectOurPets, a program I’m working on with some of my colleagues at Safe Futures, a domestic violence and sexual assault center at which I’m a board member. We’re starting up a program that will offer temporary shelter for animals when their person needs to leave an unsafe situation and won’t leave her or his pet behind. If you’re interested in reading more about it, you can find info here.

Rescue dogs have also come into my life, and I’m hoping to do some fostering in the future. Whatever happens, animals will always be a huge part of my life.

Since it's WWK, I must ask: Beach or mountain?

Wow, Liz. You are busy! I'm intrigued by the cat cafe idea and can't wait to see how you use it in a murder mystery.

Ah, Liz, you're a beach girl after my own heart. On Hatteras and Ocracoke Islands, the feral feline population is a big topic. Stores in Ocracoke have a fund boxes for tourists to contribute to the spaying and medical care program. On Hatteras, we finally got a vet, who lives there full-time, and I'm sure the vet's services are utilized. Coyotes have been spotted on Hatteras (officials think they walked across the bridge) but luckily haven't hitched a ride on the ferry to Ocracoke--yet! Coyotes and a large feral cat population aren't a good mix.

Great interview, Shari! Liz, your series sound delightful. Thanks for coming to WWK!

love the idea of a rescue cat café. And sheltering pets while their owners seek their own shelter is an inspired idea.

Thanks for sharing your ideas on WWK

I admire your energy!

We have one "official" rescue cat. We fostered a young mother and her kittens. When it was time for them to go back, we knew the adorable, very friendly, dog-familiar kittens would be adopted, but how about the mother? A tiny, solid black, somewhat aloof cat who had been found in the woods with her litter. Who would adopt her?

So we did. That was about 15 years ago, and we still have her.

When a cat shows up at our place (some seem to be abandoned pets; others feral) we catch-and-neuter (and get a rabies shot) and let them loose again. Some stick around, and eventually become pets. We are now feeding six cats in various stages of domestication.

We also have two rescue dogs.

Wonderful post, Liz. Can't wait for the new series, a cat cafe is a perfect place to plot a mystery. Cats are wonderfully mysterious. I should know, I have six (yep, ran a cat rescue--and couldn't resist rescuing a few myself).

I hope Protect Our Pets is a huge success. Too many tragedies result because shelters for the most part do not allow pets. So many abusers target well-loved family pets. The toll, human and critter, is terrible.

Please let me know the next time you are collecting books. I would love to contribute.

Liz, often cats come to my barn, although I don't have any now.I feed them but rarely bring them in the house because I have two older cats who are sisters. Their previous owner wanted to get rid of them. They had several dogs, and I think her boyfriend didn't like cats. She told me they were four years old and had been neutered, which turned out to be untrue. I also have a large collie, a canary and two African ring-neck doves. More than once when I brought in a new cat, they knocked over Pavarotti's cage and frightened my little canary badly. The last half grown cat that came to my house was too pretty to keep in the barn so I found a very good home for her. She's very happy there. Good luck with Protect Our Pets. I hate to see animal abuse in anyway.

Hi, just wanted to know if you have discontinued A Pawsitively Organic Mystery series?