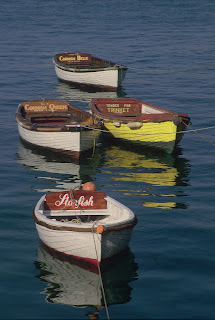 If you read my review of Scoop & Behind the Curtain, http://writerswhokill.blogspot.com/2016/02/the-scoop-behindthe-screen-by-detection.html
you may remember that the detection club was a group of English mystery writers during the Golden Age of mysteries who met for dinners and fellowship.  Among the members of the club were Agatha Christie and Dorothy L. Sayers.  From time to time some members of the group produced mysteries in which different members wrote each chapter of a single mystery. The result was always instructive, even if the finished product was uneven and less satisfying than novels written by each member.

The Floating Admiral as a whole turned out to be quite a good mystery with suspense, humor and very good pacing. Dorothy L. Sayers organized the effort with her usual high level of competence.
The rules of this particular writing game were as follows: Each writer faced the mystery presented to him or her in the previous chapters without having any clue to what the previous writers had in mind for a solution to the mystery. Each installment had to be written with a particular explanation of the crime in mind. Clues the investigator discovered had to lead toward that explanation; no problems were allowed if they only made it harder for successive writers. Each writer had to produce the resolution he or she had in mind as a separate document. And each writer was required to deal with all the information left by other writers in earlier chapters. Anthony Berkley deserves special credit as the writer of the final chapter. He pulled all the strands together and gave a satisfying solution to the mystery.

G.K. Chesterton wrote the prologue after reading all the chapters.

One interesting appendix to the book is made up of the solutions each writer had in mind when he or she wrote a chapter.

Besides offering an array of writing styles, it is interesting to consider how each writer dealt with the information that had accumulated by the point his or her chapter commenced.
Of all the solutions offered, Agatha Christie’s is generally regarded as the best. I completely agree.
I don’t believe I explained the rules of the club in my earlier blog. Members of The Detection Club agreed that their detectives must detect using their wit. Impossible contrivances such as a secret death ray or miraculous poison as part of the solution of the mystery were forbidden. Secrecy about other members’ plots and title was required. Members would help each other with advice about technical matters. Of a more serious nature was the desire to write mysteries of such quality that the reputation mysteries had for sensationalism, claptrap and jargon could be overcome.

Would you enjoy a similar writing game?
Posted by Warren Bull at 12:00 AM

I too enjoyed that book, and for many of the same reasons. It was instructive, and demonstrated the degree of discipline the writers of especially the later chapters brought to their efforts to continue the story as they received it.

Fascinating. This book is going on my to-read list.

I was in a group that did this last year. It was hilarious, each author making the plot more outrageous than the last. Until close to the end, when I wrote a chapter trying to make sense of all the plot threads before the grand reveal and conclusion.

Sounds like a lot of fun! This book is definitely going on my TBR.

An interesting project. I'm not sure I could manage to make my chapter "fit in," but it would be fun to give it a try.

Warren, would you consider organizing such project?


I think it would be rather fun. There was a group of writers who did that some years ago. I
think one of them was Dave Berry and another Barbara Kingsolver. I don't remember the others or even if I read the book or only heard about it. Maybe I'll have to read the book you reviewed if I find the time.