An Interview with Carla Damron

Clawing chest pains and a fiery car crash take one life and change the destiny of four others. The Stone Necklace braids together the stories of a grieving widow, a struggling nurse, a young mother, and a troubled homeless man, reminding us of the empowering and surprising ways our lives touch one another and how, together, we can recover from even the greatest of losses.

It’s not often that a writer has someone like Pat Conroy for an editor, but that’s exactly what happened to Carla Damron. Carla recently said that she hoped she lived up to the faith Pat Conroy and Story River Books have put in her. Anyone who reads The Stone Necklace will agree that Carla more than lived up to their faith in her. Here's what Pat Conroy had to say about her:

“Ms. Damron takes full ownership of Columbia in a way no writer ever has, capturing the flawed soul of the city and the weight of its past hanging albatross-like on the throat of the present, yet she also shows us the glimmering hope of redemption in the lives of its citizens if only they will stand together as one family, one community.”

Carla is a member of the Writers Who Kill family of bloggers. It gives me a great deal of pleasure to interview her about The Stone Necklace.

The Stone Necklace is told through multiple points of view, which made each person’s story come alive. What was your biggest challenge having so many points of view? Or was it a challenge?

It was definitely a challenge. I wrote from the third person intimate perspective, so it felt like I climbed inside each character. I ended up writing them in separate files, then braiding the stories together after I’d fleshed out each individual story arc. This meant multiple (and I mean multiple) rewrites. Keeping the stories balanced was the tricky part.

Your characters deal with problems such as addiction, anorexia, bullying, greed, homelessness, and unfaithfulness—to name just a few. How has your work as a clinical social worker enabled you to address these issues?

As a clinical social worker, I’ve been fascinated by the process of recovery. I’ve watched it happen in so many people, and that was what I wanted to write about. Lena’s marriage recovers from her affair. Sandy faces a tremendous struggle in her recovery from addiction. Becca’s dealing with her eating disorder issues, with grief, and with simply being a teenager. For each, recovery is not a linear process but a winding one.

How do you keep from getting depressed yourself writing about the challenges your characters face?

I have great empathy for these characters. In a way, each of them represents some part of me. But it’s the same as in my other job. I have to have boundaries so that I don’t absorb the pain of others as my own. That’s a formula for burnout. Also, in writing, I know how things will progress in each story. That helps me explore the inner struggles without becoming too immersed in them.

Many of your characters are transformed by their experiences. Was this your intended message?

Exactly! That transformation is what I wanted to show. It’s an amazing gift we have as human
beings—we are all works in progress, capable of change. Of recovery. This was the soul of my novel. I’m glad you got that.

Who is your favorite character in The Stone Necklace? Which one do you identify with the most?

When I was writing the novel, whichever character’s story I was working on was my favorite. Lena was the hardest character for me to get to know, but once I did, I really liked her. I definitely identify with her struggles. Joe, though, has my heart. While he’s not based on any client I’ve worked with, his struggle was familiar to me. People like him have very difficult lives, but they manage—I have great admiration for them.

You are known for your Caleb Knowles mystery series. What prompted you to write something different? 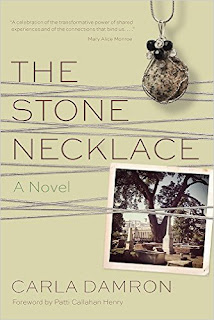 I wanted a new and different challenge. I wanted to deepen my writing. I love Caleb and plan to get back to him, but this was something I had to undertake.

Once I started this project, I realized my skill set was not what I needed it to be. This prompted my returning to school. When I completed an MFA in Creative Writing, the first two hundred pages of this novel was my thesis.

Now that you’ve published several books, what advice do you have for unpublished writers? Something you wish you had known when you started writing?

Be stubborn—persevere in finishing your novel, then in pursuing publication. Learn to accept feedback. If someone who knows about publishing tells you something is wrong with your manuscript, or something needs to be strengthened, use that feedback to shape the next draft.

What was it like having writer Pat Conroy as your editor?

He wasn’t my hands-on editor, but he was the yay-or-nay vote. He has been unbelievably kind and charitable. He loves this project, and I can’t tell you how much that means to me.

What is the best piece of writing advice you’ve received?

What do you read when you are not writing? Which writers have influenced you the most?

I am loving a brand new novel by Ashley Warlick, The Arrangement. It is so beautifully written I feel like I’m savoring each sentence. I also love Elizabeth Strout, Lauren Groff, and the short story writer Steve Eoannou (a fellow grad school student). For mysteries my list is long: Sue Grafton, Tana French, Mary Kubica, Carl Hiaasen, Janet Evanovich, and every one of my fellow Writers Who Kill authors.

Now that your book is out, what will you be doing to promote it? Will you be making public appearances?

An amazing thing has happened. The Stone Necklace was chosen to be the “One Book, One Community” read for Columbia S.C. I’m already getting tons of appearances booked. Story River Books, my publisher, has come up with some very creative ways to promote the event—including a jewelry making class where we’ll make stone necklaces.

Another remarkable thing: we have an audio version coming out with the novel. It was recorded locally by an amazing actress, Vicky Saye Henderson. I had the great pleasure of sitting in on some of the recording. 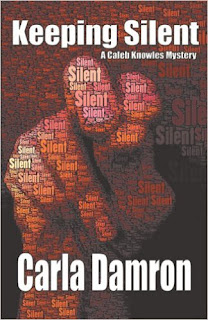 What are you working on now? Will we be seeing anymore of the Caleb Knowles mysteries?

I’m putting the finishing touches on a women’s suspense novel about human trafficking (something I’ve learned a great deal about in the pesky day job). Then I’m anxious to get back to Caleb. He’s getting himself into all kinds of trouble.

Thank you, Carla, for joining us today on Writers Who Kill.

To learn more about Carla and her books, visit www.carladamron.com.

To obtain a copy of The Stone Necklace, visit your favorite book store. It is also available at http://www.amazon.com/The-Stone-Necklace-Novel-Story/dp/1611176190

Carla -- Dig deeper. Taking the risk of trying something new and scary. Realizing you do not have the current skillset to pull it off, but proceeding to acquire it. All wannabe authors should read and reread those massively key points if they would like to make a difference through their writing.

And kudos to you for doing it. Best of everything,

Congratulations on all your successes. I know you've worked hard to achieve them. The recognition from the "One Book, One Community" program is a wonderful opportunity.

I'm sure you have a shining future to enhance the past accomplishments.

Congratulations! Impressed by the community program. Fascinated by your multiple POV's. Back to digging deeper...

So happy for you, Carla! I love these One Book, One Community programs. I hope you'll be able to find some peaceful moments in that intense schedule to savor the experience.
Back to digging deeper….

Thanks y'all. Accepting my imperfection wasn't hard! But getting the material RIGHT took a lot of hard work. Guidance from my fellow writer peeps was so important in this process.

I am so happy and inspired by your success. To be noticed by someone like Pat Conroy must be quite satisfying. You join many successful Southern women writers who have defined their own genre. (I miss your mystery series, though!) Keep up the great work.

Much success with Stone Necklace. It sounds like a wonderful book, what I consider a hardbound book (those are the ones on my "keeper" shelf).


Carla, "The Stone Necklace" came in the mail yesterday, and I can't wait to read it as soon
as I finish the two books I'm reading for my two book clubs. I'm as sure it will be as good as your your Caleb Knowles series, and maybe even better although I'm not sure how that could be.

Carla, so proud and pleased I know you and can claim to be a member of your writing group. Congratulations on a well-deserved success!