Lament of a Legal Leftover 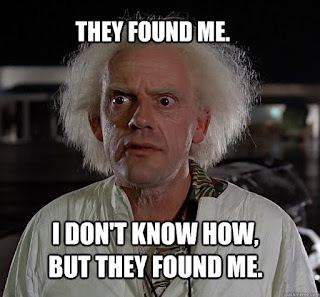 Last week I had to serve jury duty. Lady Justice decided to send me an invitation during the busiest time of the year at work, so I wasn’t exactly thrilled when I opened the envelope. It’s been many years and hundreds of miles since I was last called for jury duty and I thought I’d developed immunity.

However, on the appointed day, I headed off to the courthouse, ready to do my bit and hoping for an exciting trial.

Going through security at the tall brick courthouse amped up the anticipation. Serious looking men and women in gray suits hurried past, leather soles ringing on the marble floors. Officers of several kinds – police, sheriffs, bailiffs – passed by. I cruised past the legal library, which was stocked with oversize, leather-covered books that deserved the name “tomes.” There was a quiet electricity in the air, a seriousness that said, This is no television show.

I passed electronic docket boards hung high on the wall, listing potential cases and the location of their courtrooms. One case included fourteen counts against the defendant. Another potential juror pointed at the board and whistled. “That’s the one to get.” Several cases were local government-type things – snooze. I knew which case I wanted - the more nefarious the crime, the more complex, the better. I haven't been reading John Grisham all these years for nothing.

As I entered the jury waiting room, I imagined the judge resplendent in black robes, but with a glint of steel in her eye. The prosecuting attorney, perhaps a Sandra Bullock type, overworked but passionate. The defense attorney, a Bradley Cooper type with a killer smile, all slick confidence…. 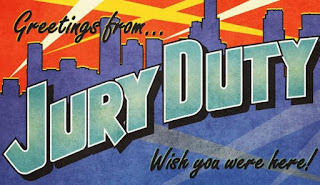 But after an hour sitting in a stiff plastic chair, my dreams of seeing a real life Perry Mason at work dimmed and faded as the reality of jury duty sank in. Jury duty was several dozen people shifting uncomfortably, texting, reading, surreptitiously snacking, and catching up on sleep. Not so different from sitting in the dentist’s office, but with older magazines.

After the first two hours, most of us were bored enough to chat. The young man sitting on my left was engrossed in Frogger on his phone. I struck up a conversation with the woman on the right, another (ahem) middle aged woman with a book. Middle aged women will always chat, and people with books are usually interesting. We chatted about how most cases nowadays are settled out of court. Probably good for all involved, but hard on those of us who want to see a juicy case.

We returned to our routines.
I checked Facebook on my phone.
Checked email.
Read blogs.
Snacked.
Read M. C. Beaton’s new novel, but even Agatha Raisin couldn’t make the hands on the clock move any faster.
We waited. And waited some more.

After another hour, the bailiff arrived, sidearm and handcuffs glinting in the fluorescent light. A jolt of anticipation – and trepidation – coursed through the room. The bailiff cleared his throat and read off the names of the chosen. Drat, not me! The chosen jurors shuffled through the door. The room exhaled and then the next bailiff came in.

My turn, I thought, coiling my feet beneath me to spring when my name was called. Can’t keep Justice waiting.

The bailiff called twenty-four names and those potential jurors shuffled out.

I shifted in my chair and looked around. Twelve of us remained, legal rejects, jury duty wallflowers. I checked my outfit. Even though I knew jurors were chosen by a random computer sort, I wondered if I had chosen the wrong outfit: a floral sheath with matching cardigan. OK maybe not jury material. I should have worn something navy blue or gray.

But I was being silly. A guy in a black Megadeth tshirt and a sleeve of tattoos was chosen. In jury duty, clothes don’t make the juror.

An administrator told us we were excused and would not be called for jury duty again for three years. I walked slowly out the courthouse doors, wondering what could have been.

Have you served jury duty?

I have only been called for jury duty once—and ended up sequestered for three weeks in a moderately famous murder trial in Hackensack, New Jersey 1976. The defendant was Joseph Kallinger and the murder victim Maria Fasching.

We did not have anything so pleasant as a Holiday Inn Express. Howard Johnson was the county's choice for us. After eating most breakfasts and dinners there, I have never entered a HoJo's again!

I've been called twice but never selected. Much to my relief. I don't like making decisions about other people's lives. One of my friends was on the jury for an accused murderer. When he was convicted and later executed, she breathed a sigh of relief. The murder had been so horrific she was relieved he wouldn't be on the streets again.

I've been excused after questioning because of my work background, so I haven't served on a jury.

My poor mother was called for a federal jury on a smuggling case at the port of New York. It was a super hassle--fortunately, during the week, she could stay with one of my brothers rather than joining the ccmmuting throng to and from her house every day.

She was very careful to listen to hours of boring testimony. The trial lasted for several weeks.

Once the jury was in deliberations for several days, they were called back to the courtroom. A plea bargain had been negotiated, so they were dismissed.

She was furious! All that wasted time and energy.

In Fulton County Georgia, we were summoned every 18 months. I killed many hours sitting in the jury pool room in downtown Atlanta with hundreds of other jurors. Once, I was taken to a courtroom as a prospective juror. The defense attorney walked down the line, eying us, then went to the judge and pled guilty for his client. Too many women in the jury pool for a rape incest case. I am so thankful I wasn't on the jury for that case.

I've been called four or five times. I served on one jury when I was the chair. Another time I got to the stage when attorneys asked us questions. After hearing about my job, I was the first one dismissed.

Jim, Sounds like you had quite enough of that sequestration business - and Ho Jo's (are there any more Ho Jo's, I wonder?)! I think that's everyone's fear - being stuck on a long trial. I think you definitely did your duty.

Hi Grace,
I know what you mean. We tend to think about it as a big annoyance, but jury duty is a huge responsibility.

KM - I'm with your mom! I'd be furious, too! From what I have heard, with many trials, most parties want to do all the bargaining up front. Saves money and time for all.

Margaret, I, too, was filled with dread at the thought of being empaneled on a truly awful crime. Though the thought of a really boring crime scared me a bit too - I was afraid I'd nod off during testimony.

Warren, did you say counselor or mystery writer? Actually I think both would make you an excellent juror.

I was a juror on a civil trial which was interesting. I felt like both parties were lying and I was fairly certain that we weren't shown all of the evidence. It wasn't easy to make a decision. I gained an appreciation for judges.

Hi Kara,
I never even thought about that scenario - what if both are lying? I guess I am used to the clearly delineated hero/bad guy set up of hour long tv shows.
So it sounds like the judge came through (and probably felt the same way you did)?

I never have! I was on the waiting list once, but I never had to appear. I'd probably be thrown out anyway, given that I'm a longtime journalist in my town. They never pick journalists:(

Our courthouse won't let you bring a cell phone. Nothing that can take a picture or access the Internet. Last time I was there, they would allow e-readers. Actually a lot of the people called probably didn't get to make it to a jury either. They have to go through voir dire which will weed out more for multiple reasons, including knowing someone involved in the matter at hand.

Great blog Shari -- you made me feel like I was right there with you. I was called, seated, and then told to leave. The victims were in the military and my husband had just retired from the Air Force. I had all those same feelings -- want to be on it, don't want to be on it, repeat.

Hi Sarah,
I think that journalists would make great jurors, but I can imagine that afterwards the desire to write about the experience would be VERY strong.

Hi Kait,
I was surprised that my county allowed electronic devices - we were all on our laptops and phones the whole time. I imagine that once in the court room, things changed.

Hi Sherry,
I wish you could have been "right there with me" doing something more exciting that enduring a hard plastic chair! I wonder if you would be disqualified now because of your job, though I think mystery writers would be great assets on a jury.

Shari, it's been a while since I was called. Three lawyers were part of the pool. The two of us who worked for the government served on juries, but the third was a well known criminal attorney, who sat in a corner working on a computer all day. At one point, after once again failing to be selected, the judge said regretfully, "Poor [criminal attorney's name], unwanted by any jury."

Paula, What a scream!

Shari, thank you for your service. It is important!