An Interview with Author JL Simpson

Hot on the success of her first case, Daisy Dunlop can count the offers of work on one finger. An empty bank account and the need to prove to her business partner, PI Solomon Liffey, that she is an asset not a liability, calls for drastic measures.  Terror has to be overcome as she answers a plea to find the one thing that gives her night sweats and flashbacks. A dog. A missing stud poodle to be exact.

Solomon’s amusement at Daisy’s new case is short lived when the arrest of his former girlfriend, Lisa, leaves him with the fulltime care of his young daughter, Molly. A body is discovered in Lisa’s bed. Now he  needs to help find the murderer before Molly’s safety is compromised.

When Daisy realises the dead man is linked to her current case, and the body count rises, Solomon and Daisy are forced to work together to find the killer. Would the sexual prowess of a poodle really incite someone to murder, or is the real motive hidden somewhere in Solomon’s secret past?
http://jlsimpson.com/daisy-dunlop-mysteries/ 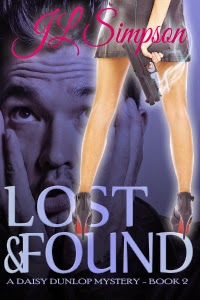 Since I last interviewed JL Simpson, she’s made changes in her publishing. After book one in her Daisy Dunlop series, Lost Cause, JL received an offer for the screen rights for the series, but I never heard what happened to the offer. Then JL decided to self-publish. I’m not sure if this upside down trend is the result of her living down under, but she already has a success in the series. Daisy is a bad good-girl!

What happened to the screen rights?

That’s a very good question. It was all excitement for a few weeks and then it just stopped. One producer was looking at the story and my man in the UK was working on it but my man appeared to lose interest when we started contract negotiations to see how we would split the proceeds of any deal that was made. I don’t have the contacts in the industry, and now I have lost my man, Daisy is firmly back on the shelf.

Why did you decide to self-publish the series?

The publisher I was with had a romance background, and I was concerned that the first book was being marketed as a romance novel. The original cover was very pink and girly, and the book description had a romance feel. Once I got the rights back I gave the covers a make-over and changed the description to show it’s a mystery novel with humor, not a hot and steamy love fest.  Now that I am in control I’m loving it. I get to choose the prices and the marketing and, sink or swim, I only have myself to blame. Having ultimate power is a huge boost to your ego.

In Lost & Found, Daisy goes from heir hunter to dog finder, but she doesn’t seem too disappointed. Why?

When you’re as crap at your job as Daisy is you’re grateful for any bone tossed your way. She is an heir hunter, but she’s happy to find anything that’s lost to make some money and prove to Solomon she has skills at something.

Given that dogs terrify Daisy, why does she accept the case, and who does she get to help her?

Having someone specifically ask her for help is a huge rush for Daisy. The dog owner saw an article in the local paper about Daisy’s first case and wants to hire her to find her most treasured possession. Daisy can’t resist. Besides Solomon finds the idea of Daisy dog hunting hilarious, so she has to prove to him that she can do the job just to shut him up. Daisy knows her limitations. When she bumps into the homeless man who tamed wild squirrels to sleep on his chest, Cliff Richards from Lost Cause, she knows he’ll be brilliant with dogs and hires him as her assistant.

Solomon, the PI, and Daisy have an obvious physical attraction. Is it a game?

I think it’s a game. Both of them are aware that the other finds them attractive and try to use that knowledge to gain power. No matter who instigates the kisses they share, it’s never about lust or love it’s about putting the other one off their game and gaining control of the situation. Daisy is in deep denial about her attraction to Solomon. He, on the other hand, is more than aware of Daisy’s effect on his libido.

Why did Solomon feel obligated to Paul, Daisy’s husband, to hire Daisy?

When a man has taken a bullet in the backside to save you from the outraged father of a girl you have seduced, you can’t really say no when he asks you for a favor.

The character of Nobby is intriguing. Tell readers about this character. What is Solomon and Paul’s relationship to him?

Nobby is not what he seems. Daisy has no idea about any past between Paul, Solomon and Nobby until some way through the story. I could tell you what it is but it would spoil the plot. Needless to say, nothing Daisy has discovered about her husband’s former life with Solomon was ever good.

How does Solomon escape from the ladies’ room when Mavis enters? 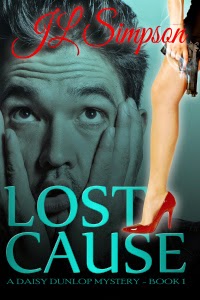 Good question. Didn’t he say he’s an Irish Ninja? Because I didn’t include the escape in the story, Solomon has never dignified my polite enquiries with a response. But my best guess is he climbed out of the window.

Why does Solomon tie Mavis to the bedposts?

Because sometimes tying a girl up is the only way to get what you want. What does he want when he ties her up? I doubt very much it’s what you are all thinking. Solomon can be a good boy, sometimes. J

Daisy doesn’t do undercover roles well. How does she cope?

Alcohol. Copious amounts of booze. Which doesn’t help her maintain a character, but it does make it more fun when she stuffs it up.

In this book, readers meet Molly, Solomon’s daughter. Lisa, her mother, has a risky lifestyle. Will Solomon have to change his ways to have Molly live with him?

This is an ongoing problem throughout the book. What do you do with a small child when you don’t work regular hours? He struggles to find people to take care of her, ever mindful that what she really needs is stability. The need to give Molly a better future is what drives him to make the final decision about her ongoing care and gives the story an interesting twist.

Will Molly’s Teacup Toy Poodle that Daisy bought her ever stop peeing on Solomon?

I am not sure this isn’t giving away too much of the plot but I simply couldn’t resist the idea of a big burly man being gifted a teeny tiny dog. And having the dog destroy Solomon’s favorite things and pee on him is just too much fun to resist. I am sure that Solomon will get the dog house broken, eventually.

Will Belinda ever get a boyfriend or a booty call?

All is revealed at the end of Lost & Found but you can be sure nothing is ever as simple as it seems.

Why does Solomon think he is Paul’s brother?

Paul’s father’s name is on his birth certificate. His mother told him his da was in the Royal Engineers on a tour of duty in Northern Ireland when they met and fell in love. He has no reason to doubt what he has grown up knowing to be true.

Daisy would never sleep with her husband’s brother would she? Is the twist at the end of Lost & Found a game changer?

Daisy is totally devoted to Paul. She feels safe with Solomon, because he’s family and won’t act on any attraction they might feel for each other. Would Daisy risk her family for a walk on the wild side? I’d like to think she wouldn’t. Is something going to happen in the future that changes her life, so that sleeping with Solomon is the only sane thing to do? Who knows? I guess time will tell.

What’s next for Daisy?

Next is Lost Property. Daisy is hired by Liam Sparks, a solicitor from Lost Cause, to find the sister of one of this clients. Tomas Jenks died and left her everything, trouble is he never told Liam her name. Daisy soon discovers Tomas Jenks is not who he seemed to be and that she’s not the only one interested in finding his relatives. And yes, Solomon gets dragged into the case when Daisy gets in way over her head, even though he had decided never to work with her again.

Hi JL,
Your series sounds hilarious! I will keep my fingers crossed that someday Daisy and her crew make it to the screen - large or small.
Shari

What a complicated scenario. I'm with you about control. It does make all the work worthwhile, and as you say, if it doesn't work out, you have no one to blame but yourself. Too bad the film prospect didn't turn out. That's the brass ring. Best of luck, Janet.

Welcome to WWK, Janet. Your series sounds like books I'd like to read. Like you, I self-publish for the reasons you listed. I'm not sorry I decided to go that route.

I love the covers with the girl holding the gun. Interesting about the screen rights issue. Sometimes, when weird stuff happens like this, it's for a good reason. Congratulations on your books.

Sounds like a fun series! I look forward to reading these.

JL's books are fun reads. I'm sure JL will comment soon. Now--she's asleep and a world away in Australia, where she lives! Thanks so much for the interview. Please come back again!

Your first book must have been terrific if someone wanted the film rights. It's piqued my interest. Good luck with the self-publishing.