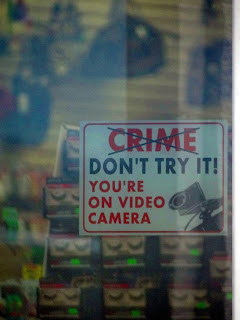 Although actual crimes have been the inspiration for much of crime fiction, some real crimes would not make believable novels.

A twenty-five year old man in Delaware who was suspected of shoplifting was stopped by police officers.  He was walking with his two children. Asked to put his children down, he eventually complied after slipping something into his eight-month-old son’s diaper.  An examination revealed the diaper held 16 packets of heroin.  Police did not believe the infant was at fault.

A high school junior in Suwannee, Georgia was detained after a wild spring break party.  Police officers looking for the location of a loud party noticed the intoxicated minor carrying two beers.  The teenager tried unsuccessfully to hide the alcohol.  Instead of answering questions, he hit one of the cops and tried to run away.  He added substantially to the crimes he could be charged with.  Sometimes doubling down on stupidity just does not pay off.

A woman who worked at a Kansas medical center came into the employee credit union carrying her infant.  She identified herself and made a withdrawal from her account.  She hung around for a few minutes, returned to the teller window and announced she was holding up the credit union.  She demanded money, but what she got was an arrest.  Are infants encouraging crimes?  (See above) No, I don’t think so.

An eleven-year-old Spanish student trying to avoid having his father attend a parent-teacher conference sent his father a text message claiming he had been kidnapped while taking out the trash.  His father, a police officer sent out a nation-wide alert.  The boy was found hiding at a house his parents owned.  I think the boy’s father should have been suspicious of when the boy said he voluntarily took out the trash.

Recently in the United Kingdom a young man dressed as a penguin walked out of a convenience store with a case of beer he did not pay for.  He was caught on film by a security camera.  His elaborate disguise did not hide his identity.

A man ordered a $10.00 meal at Denny’s. After he ate, he realized he was $9.00 short of the bill.  First he offered the cashier a bag of marijuana in trade.  When that didn’t work he loudly tried to sell his drugs to other customers.  Sometimes honesty does not pay.

A woman in Florida threw a surprise birthday party for her boss.  The costly celebration aroused suspicion.  After investigation it was learned that she had been skimming from the company for ten years.  Try to do something nice for someone…

Two detectives in Florida were arrested for breaking into city hall. Their explanation was that they had to use the restroom and the one in their part of the police station was “nasty.”  According to a news source they “didn’t recognize the severity of the situation.”

A man in Florida, apparently not well acquainted with elevators, pulled a knife on an elderly woman in an elevator.  He then walked into the closed door.  Although he escaped arrest, he was caught on camera.  He is now a YouTube celebrity.

Have your read about other Napoleons of crime?
Posted by Warren Bull at 12:00 AM

One of my favorites is the guy who decided to hold up a bank and wrote the note on the back of a notice from the parole office that was addressed to him.

And the recently paroled guy who jumped in the back of an unmarked police car and tried to hijack it. The officers in the front seat, both in uniform, locked the doors and drove to the police station, less than a block away.

Then there was the genius who forced someone to drive around to several ATMs and made withdrawals from his own account.

Don't forget the guy who was placed in a lineup for possible identification. When the officer in charge told him to say, "Give me your money," his response was, "That wasn't what I said."

Ah, yes. Try to put that in a fictional story.

One guy wrote "Give me money" on the back of one of his own deposit slips.

One guy, ex-Army, wore his Army jacket to rob a bank. His name was on the pocket.

One guy had such a terrible handwriting, the teller couldn't read whatever he wrote on a slip of paper. She called the manager. The guy fled. The manager finally deciphered the note: "Give me money."

If you tried putting any of these stories into your mystery, your editor would return it, saying that it wasn't believable. Sometimes truth is stranger than fiction.

Fun stories, Warren! I recently read about a man who tried to rob a convenience store and failed. He ran across the street and called his mom to pick him up.

We had a couple of teenagers in our area (southern Oregon) who committed a murder and fled, supposedly to an aunt who lived in Los Angeles. They obviously felt stressed by their plight, so what to do!

Naturally, the two of them lit up a couple of reefers. On the lawn of the California State Capitol building in Sacramento. The security guy had no sense of humor whatsoever, and they were held for extradition back to Oregon.