Where Do Stories Come From? Urban Legends, the Bunny Man, and Disco Donna

Many thanks to E. B. Davis for inviting me to talk about the genesis of my short story, “Disco Donna,” published this month in the Chesapeake Crimes: Homicidal Holidays anthology.

So, where did Disco Donna come from?

Urban legends fascinate me. Not so much the ones about albino alligators in the sewers of New York City as much as tales of vanishing hitchhikers or haunted Lovers Lanes. These stories often reflect the preoccupations and fears of those living where the events reportedly took place.

One aspect of urban legends that especially intrigues is the associated phenomena of legend tripping. Did your teenage self – on a dare – ever go to a supposedly haunted house or cave where doomed lovers died, or an unholy rite occurred, or a monster lurked? If you did, you, my friend, legend tripped. 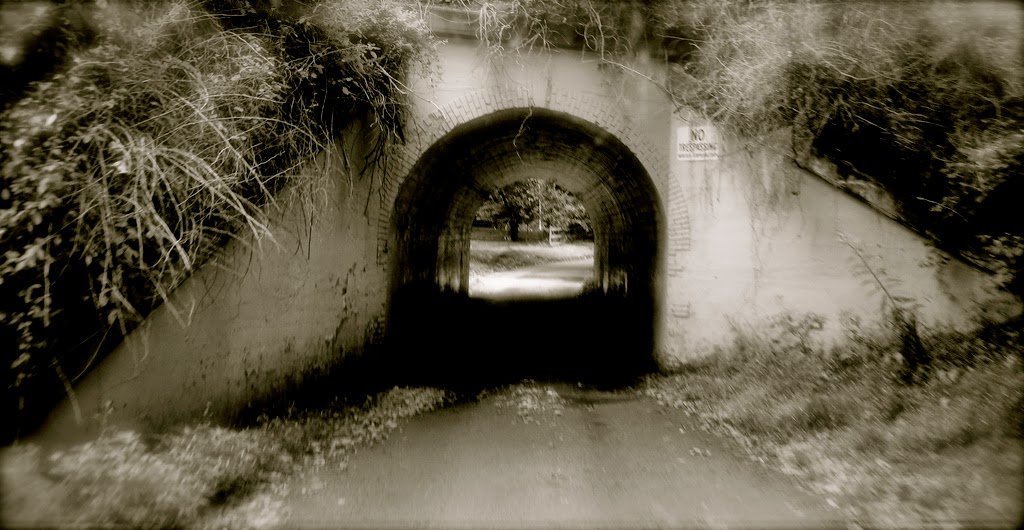 Teens in my area go to the Bunny Man Bridge, site of the urban legend of Fairfax County, Virginia, the Bunny Man. Years ago – no one is exactly sure when – an escapee from an asylum (naturally), wearing a bunny suit, menaced parking kids with a machete on the isolated, lonely roads near an abandoned railroad bridge. The usual stew of insanity, fear, death, sex, and a machete for good measure make this an enduring tale, and teens still dare each other to visit the creepy bridge.

At the same time I was mulling over story ideas, some friends and I were talking about reputations. Do teens worry about their reputation anymore? I flashed back to long ago high school days when many girls (sign of the times – it was usually only girls) had a “bad reputation” due to their dating history.

That’s when beautiful, wild Disco Donna Demonte danced—to a Bee Gees tune—onto the page. Fictional Donna is a high school student in the seventies, bad rep, too hot to care, discovered murdered in her bed the morning after Halloween. She had been strangled and is clutching a single, red rose. Rumors swirl about the killer: Could it have been the high school football captain? Devil worshippers? The ever reliable escapee from an insane asylum? As years pass and her murderer is never found, kids from the town dare each other to visit the abandoned house where Disco Donna was murdered.

Flash forward to the present day, to some high school girls in a vintage clothing store trying to decide what to be for Halloween. One girl decides to dress as the town’s most famous citizen—Disco Donna. That innocent decision sets in motion events that finally unmask Disco Donna’s killer.

Hope you enjoy the story. Just remember to put some Donna Summer on the stereo, lock the door, and read with the lights on.

I am grateful to the wonderful editors of the anthology: Barb Goffman, Donna Andrews (not a model for Disco Donna!) and Marcia Talley. These brilliant criminal minds were there when I needed them to fill plot holes, polish prose, and vanquish tense shifts. A million thanks, ladies.

Do you have a favorite urban legend? Did you ever legend trip?

You're very welcome, Shari. Not every day do you get to help a dead girl's dress get its due. And I'm waiting for our road trip to the Bunny Man bridge. That should be fun.

Would visiting a supposed haunted house count as legend tripping? I've had an idea for a story about that for a while. Need to find the time to write it.

Shari, I wonder if Barb ever took the Leesburg Haunted House Tour? There is also one in Gettysburg, which I'm told is similar because of the Civil War Ghosts. If Barb needs research, 'tis the season!

I love how writers' minds work. Thanks for the insight on your story!

Shari, great insight into how one memorable story can trigger a new one.

Congratulations on its publication.

That railroad bridge looks just like the one I go under every time I go to visit my brother. Yikes! I may never go at night again.

And around here, that's not even the haunted bridge. The haunted one is an old covered one over Tom's Creek. Supposedly something jumped out of the bridge one night at a drunk man riding home. The horse shied, and the man fell off, hit his head and drowned. The horse went home alone.

Now both whatever it was that jumped out and the man who drowned are under the bridge, just waiting for people to stop. And you do have to stop, since they've installed a traffic light (one lane bridge with poor line sight) so there won't be collisions on the bridge. The light stays red in both directions until it's triggered to change.

Shari, your story sounds like a good one. I'll have to get that anthology. When I was a teenager, I didn't know of any places like the bridge you spoke of, but over the years I've visited a lot of historical homes, including one in the city near me, which is supposed to be haunted. Every year that city puts on a Ghost Walk visiting different houses in the oldest section of town with people dressed up in the period who tell their tales.

Hi Barb - I think if you write the story it will become the legend…how exciting! Now I will have to haunt you until that story gets done.

So, Barb, E. B. and I want to know which house it is. There are so many haunted sites in this area. The Civil War's shadow is long.

Thank you, Jim. It's interesting to see how events - the changes from the rural character of the area to suburban - seem to have been the impetus for the bunny man story. That's what academics think. I think it is many that spectacularly creepy underpass.

Hi Warren, thank you. Yes, one story can lead to another!

Kathleen, that bridge sounds creepy! Knowing the story I would hate to have to wait at night for the light to change! Sounds like a good setting for a mystery.

Gloria, I've never done a ghost walk, though there are plenty around here. I'll have to put that on my bucket list.

I haven't visited a haunted house, Shari, but I will force some children to ... eventually.

Disco Donna is such a fun story, Shari!

I've visited the Lizzie Borden house although I'm not sure that's considered legend tripping. It was interesting, but I didn't see any ghosts or solve the mystery of who killed her parents.

Kara, the whole Lizzie Borden thing is so weird. Do you remember the movie with Elizabeth Montgomery as Lizzie? I felt so bad seeing Samantha Stevens playing that role.

No legend tripping here, but i enjoyed hearing how you layered the story. I have had the most fun when i did that for Halloween. Not content to mismatch my wardrobe and be a simple prostitute (remember when wearing heels with shorts wad egg both to make that costume ?), I became a prostitute from new Orleans who survived Katrina and was pissed off at FEMA. So torn house, a suggestive night ie, with a bathrobe with teddy bears on it, backless boudoir heels, a hurricane glad, beads, a cigarette in a cigarette holder, and a sign "I survived Katrina Didn't survive FEMA" because now she's homeless...

I love how others were there to help you with plot holes. That might be an interesting footnote to add on how the story evolved.

Thanks for the story behind the story, Shari. I've lived in Fairfax County for four decades and never heard this suburban legend. Now I know to avoid that bridge.