The Frustrations of Living in the Almost 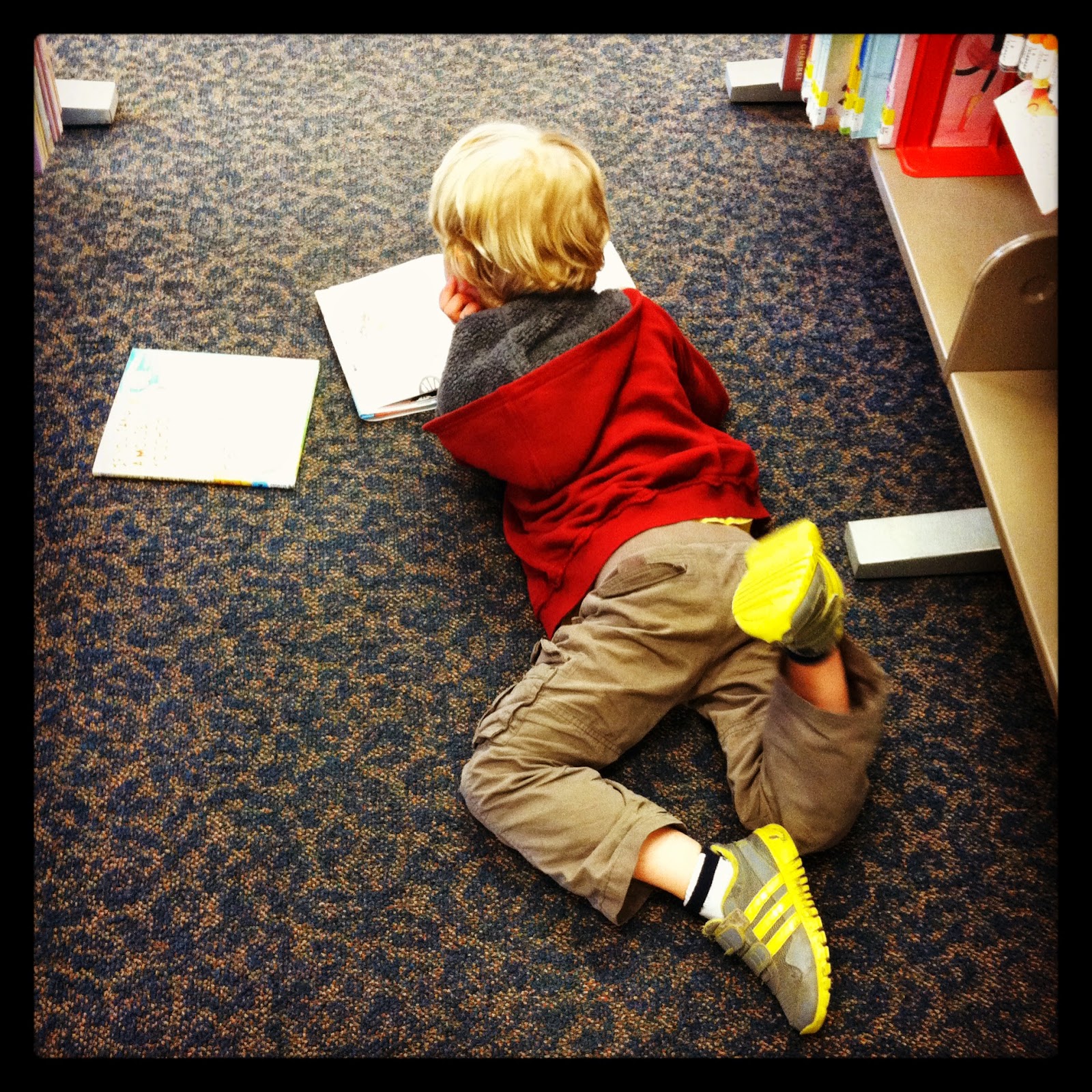 My five-year-old is right on the cusp of reading. Painfully close. He can sound out words, and “read” from memorization. But he’s not there yet.
Which is killing him.
Most of the time, when he asks me to read to him and I’m too busy to do it right that second I tell him I’ll read to him in a bit and then suggest that he could look at the book and figure out what it says by sounding out the words or looking at the pictures or both.
And, most of the time, his answer is: “But I can’t read!”
Cue tantrum.
I’m exceptionally proud that we have tantrums over this sort of thing because reading is a pretty darn good thing to get so emotional about, don’t you think?
And, of course, I love that he loves the library (as seen above on a weekly visit) and that he wants us to read to him. And that he wants to read books all by himself—which he will. Very soon. He’s not even in kindergarten yet. He’s got the time, motivation, and plenty of books for practice.
I was thinking about his ongoing frustration the other day while working on a revision. It struck me that authors are nearly always stuck in the same sort of “almost” as my almost-reading son.
We’re almost done with this draft.
We’re almost done with this revision.
We’re almost ready for submission.
We’re almost to an answer.
We’re almost to a deal.
We’re almost to a final contract.
We’re almost to release day.
We’re almost settled on a new idea.
And so on.
For me, the key to surviving the almost-ness of this business has been a two-parter:
1. To always have something planned to do next.
2. To always have something going on outside writing (family, running, cooking, other hobbies).
What’s your key to surving a life in the almost?
Posted by Sarah Henning at 12:00 AM

The difference is that a lot of our almosts are within our control, whereas your son has a bit of mental growing to do and then poof he’ll have it. For those things under my control, I try to take control. Those I can’t affect I try to ignore and concentrate on something I can do.

And when I fail, I remind myself what success looks like and try again. :)

I think it is not an altogether bad thing for your son to find out that what he wants takes time and effort to achieve. As jim said, some things are out of out control, we put in time and effort with no guarantee. To balance that I find having friends and family helps. Also doing other things that I enjoy reminds me that some things come easily.

Sarah, I can identify with your son's frustration! I feel like I'm going through a plateau period now. I like what Jim and Warren have said. The other day, I wrote down what I had achieved over the past year. I ended the list with: "The water in the glass is rising." I look back at that when I need encouragement.

Sarah, how good you must feel that your son is frustrated over something so dear to your heart, too. My first son at that age wanted to be a garbage man. Of course, of all my children, he was the one who loved reading the most.

I write long "to do" lists and at the end of the week the list is still long. I get frustrated over the too many things to do and the not enough time frustration. One of my sisters looked at my list once and decided she needed to lie down and take a nap after reading my list. :-)

Right now I'm hearing that song "High Hopes" in my mind - the one about the little ant trying to move a rubber tree plant "Oops there goes another rubber tree plant!" Your son will get there.
The Almost is a frustrating place. It helps to focus on the things within my control - the actual writing or sending a query. Achieving small writing goals - a blog completed, edits done - helps me feel that I am moving in the right direction.

Even though my writing life started years ago, I'm not sure if I am surviving well. I always seem to be playing catch up. If I get amerced in my novel, short story opportunities take me from the novel. Once I finished a spurt of short stories, I have to catch up reading and doing author interviews. So, I try to hurry through them to get back to my novel. And the whole cycle repeats itself over and over. I do the same thing with real life work. Oh no, I'm a lab rat!

In the area of South Chicago where we were living, making book was a very real occupation. This was pre-lottery days, and lots of people were numbers runners. It wasn't hard to find someone to take a bet on almost anything. Her statement led to a conversation with school personell about what she was exposed to at home, especially since she was once in a while picked up at school by my then-boyfriend, who was a biker. I'm not saying that we were totally law abiding at that point, but we weren't bookies.

Jim, I have a tendency to assume everything is out of my control, which I know leads at times to not taking steps that I could to influence the outcome of things that I care about. I try to be aware of that tendency and combat it.

The "almost" can be a frustrating and discouraging place. But I think striving and overcoming obstacles is one way people grow. Henry Miller wrote a story about a guru, a boy, and a butterfly. It ends with the boy learning that the only way a butterfly can strengthen its wings is by beating them against the cocoon while emerging. Without strong wings, it wouldn't survive in the world.

Everyone has such good comments about this! I'm totally on board with controlling what I can, and trying (so, so hard) not to worry about what I can't. Kind of hard to impart this on a five-year-old, but, hey, we adults can practice this.