The Nation’s Capital & The Big Easy 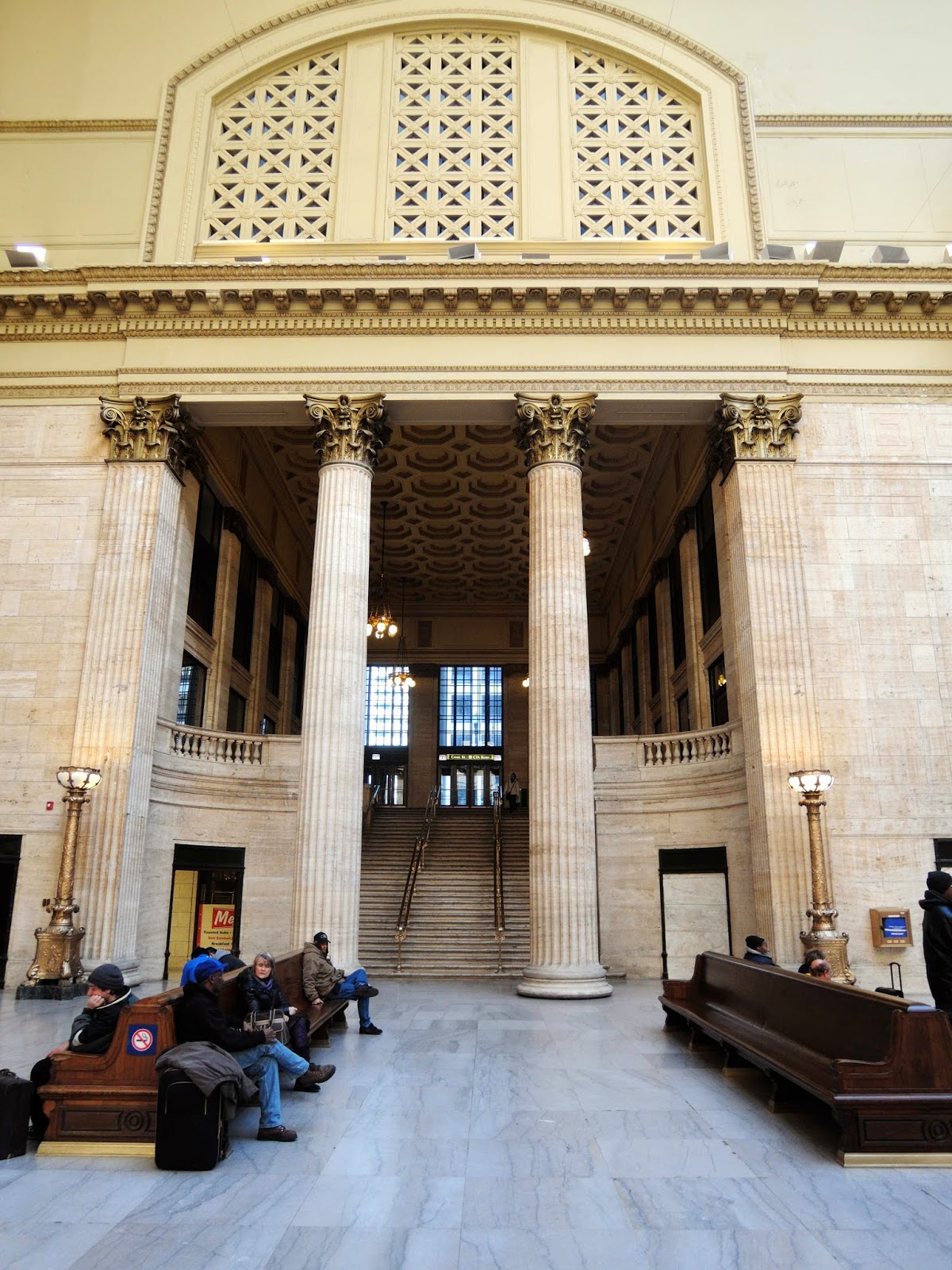 Using the Left Coast Crime conference as an excuse, Jan and I indulged in one of our favorite means of transportation: train travel, using sleepers the whole way. Our trip started in Savannah (our winter home) and the first train was an overnight to Washington, DC. We arrived early morning at Union Station. I love the old train stations, built in an era of growth and optimism. Built to last, with high open spaces, the architectural details are wonderful. With the advent of airplane transportation, we turned our backs and neglected most of those splendid buildings. Some, however, took on new lives and have been restored. Washington’s Union Station is one of those in good shape.


After breakfast in the station, we had the day to play in D.C. before our late afternoon departure. We chose to explore the city on foot. Washington is a fine walking city with its parks, malls, monuments and such. We happened to be there on a Sunday, which started out quiet. Early in the morning we met a skagilllion joggers enjoying the empty streets. Later in the day, as crowds grew around the various monuments, I was impressed by how contemplative people were around our war memorials (WW II, Korea, Vietnam), how friendly people were around the Presidential memorials (Lincoln, Roosevelt & Jefferson). 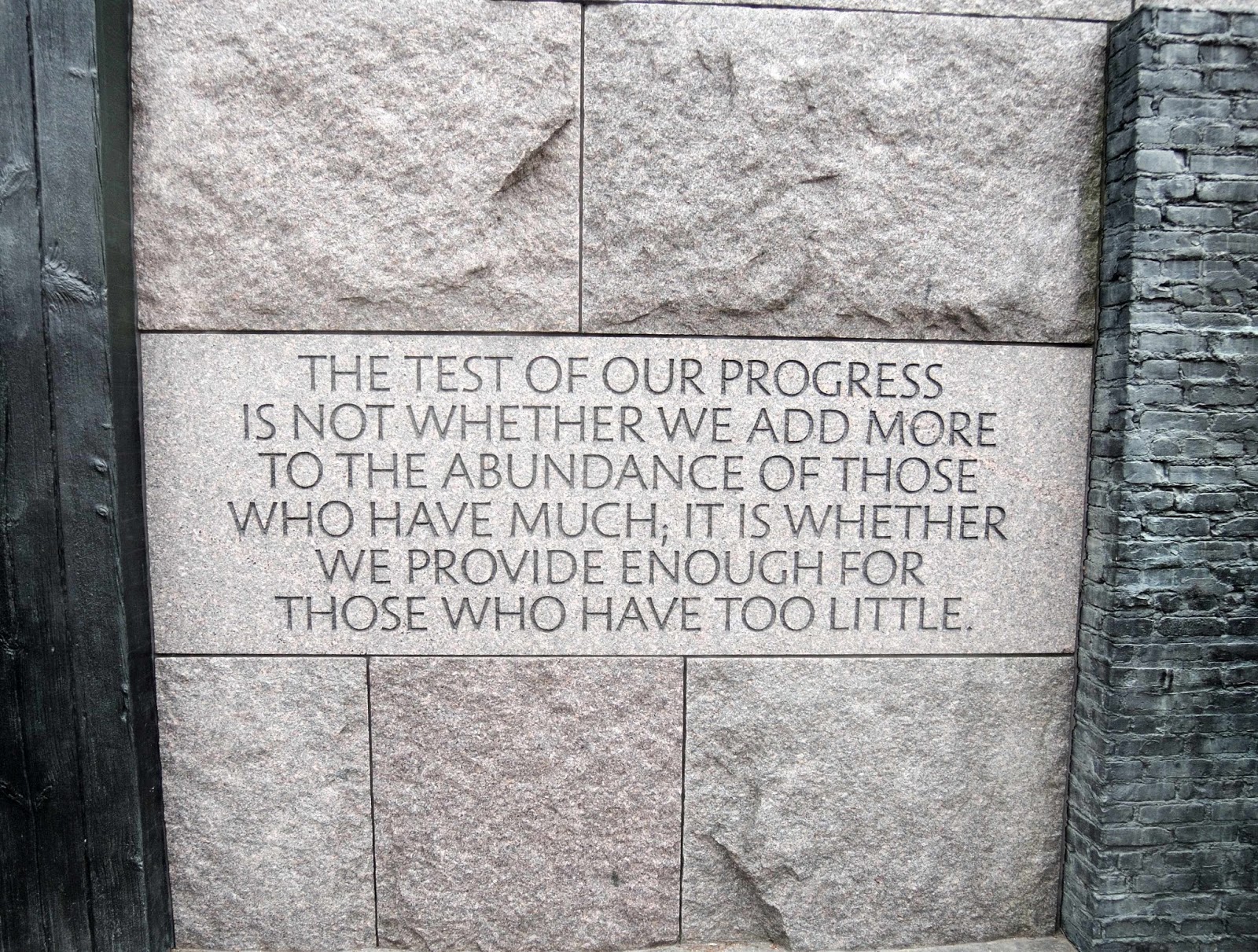 New for me were the Martin Luther King Memorial and FDR Memorial. Most depressing were FDR’s words regarding conditions in the country before World War II. While much has changed between the great depression and now, many of his words are as applicable today as they were then regarding inequality.


On the way back to the train station we met well-mannered crowds awaiting the start of the annual St. Patrick’s Day parade. After a late lunch we hopped back on the train.


I’ll fast-forward the trip through Chicago, Left Coast Crime, LA. and arrive in New Orleans, “The Big Easy.” The train station is utilitarian, clean, functional, but with none of the beauty of Washington’s Union Station (still it was a huge step up from the Birmingham, AL station that was really rundown). We arrived at night and spent the following day in the city.


Twice I had spent time in New Orleans attending conventions during my business career and had enjoyed the city. That was then; this is now. And now, I am so not a New Orleans person. One of New Orleans’ attractions for me had been its interesting architecture. The architecture hasn’t changed; however, now that I live in Savannah, it’s no longer so special.


I will continue to grant New Orleans its food. We ate well, but this city that wants you to “Let the good times roll” is a city fueled by excess alcohol. 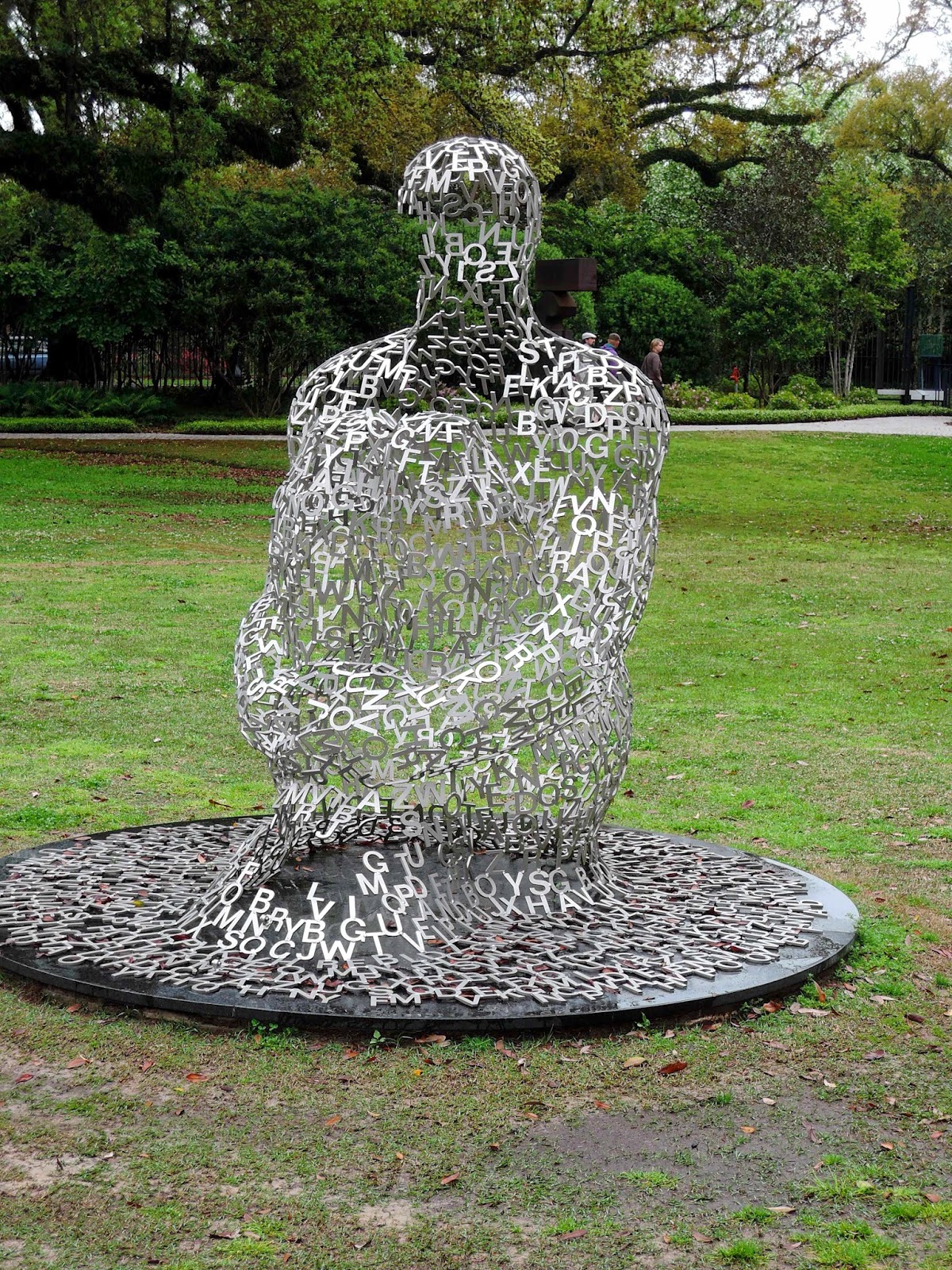 People were loud and rude—that’s the visitors, of course, the residents were pleasant and interesting. The temperature was wonderful so the streets were full. Walking with petite steps is not my thing. I’m sure the jazz was great, but I had no desire to go anywhere near Bourbon Street after dark. The one place I really enjoyed myself was the Besthoff Sculpture Garden.


The issue, of course is not with New Orleans. The issue is me. There is an energy about big cities that I do enjoy. Give me New York, or D.C. or Chicago or San Francisco, and I can tap into that energy. Like an old fire horse, my step turns a bit faster. But I’d rather have a quiet walk almost anywhere than be in the midst of a mass of alcohol-enhanced people, which is New Orleans in the French Quarter. 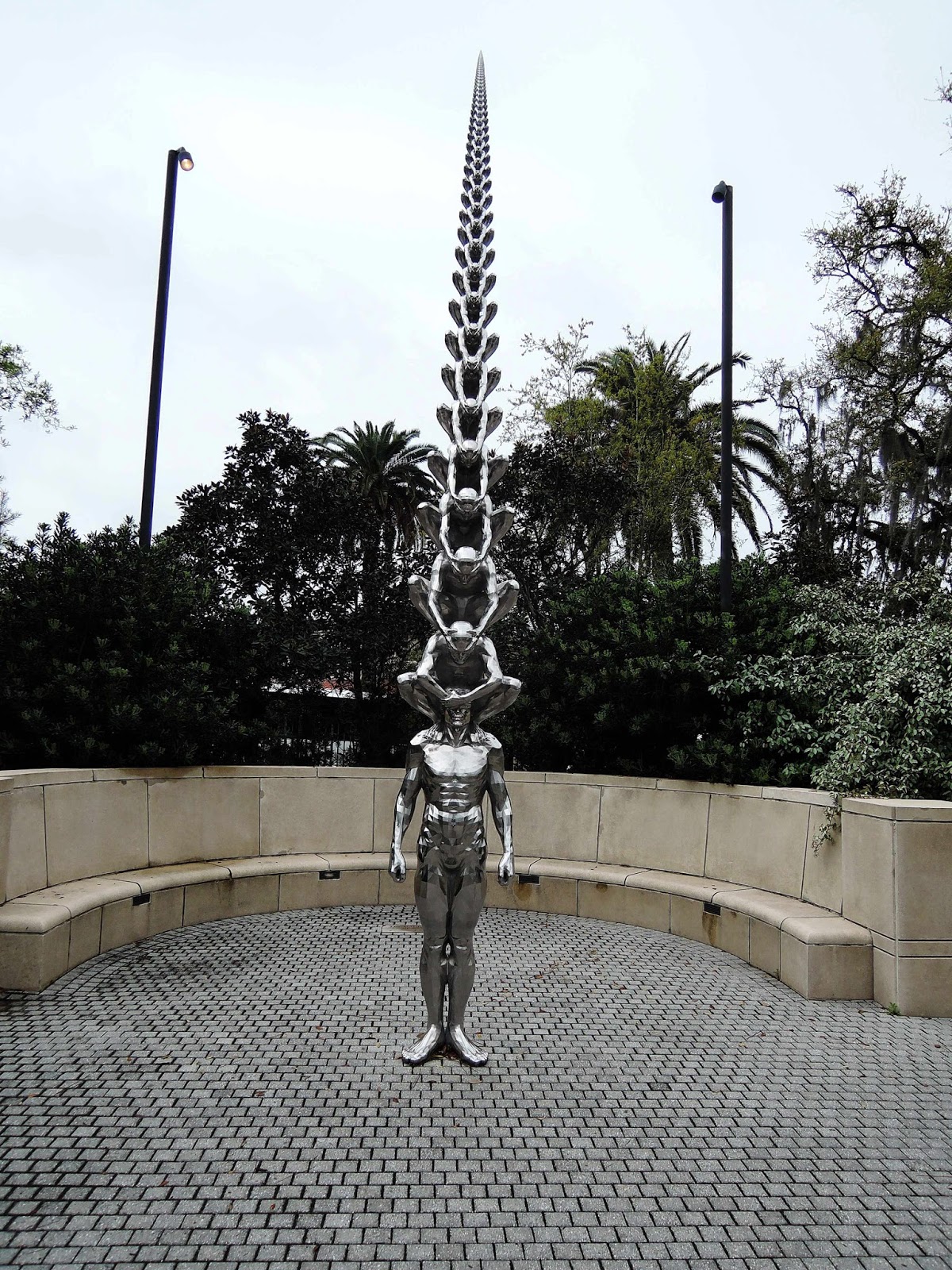 We didn’t have time to visit the new World War II museum in New Orleans, which people raved about. I doubt that will be enough to tempt me to return any time soon. I can see a few more train trips to D.C. or New York in my future. Hear those whistles blow.

Jim, I've never gone long distance on a train - only short distances, but your trip sounds interesting. One of the things about Malice Domestic is that I've never had time to see the DC. I've been there 2 or 3 times, but twice it was with kids - mine and Girl Scouts years ago and once when my brother ran the Marine Marathon and I saw very little of the city that day.

I've never had any desire to see New Orleans or Las Vegas. The couple of days I spent in New York City was interesting going in on a train from New Jersey. Grand Central Station is magnificent. I really love San Francisco which I visit at least once a year since my daughter lives in the area. I also like Seattle. I have a sister who used to live there and now lives in Tacoma - still within driving distance. Like you, however, I love most the countrysides, forests and streams etc.

I hope your good experiences mean that train travel is recovering. As someone who has spent hours on a stalled train in the middle of nowhere (no heat in subfreezing temperatures, no food, etc. and then, to add insult to injury, the crew's shift was over, so they all managed to find someway to leave the train, or at least hole up) I like the idea of train travel but I'm not sure I want to chance it. One of the most interesting train stories is the train inspector who ordered soup in the dining car and was served a bowl of detergent that had left to soak a soup pot (he had vials to take food samples for testing)

That said, one of my favorite transportation hubs is the Harrisburg train station. It is magnificent, and I have been there when it has been decorated for Christmas. It's a great place to wait, even if you're taking the buses that pull in to the lower level.

The next time any of you make it to DC, visit the Capitol. My oldest son is a historian and visitor guide there!

My favorite spot in the District is the WWII Memorial. So peaceful.

I've lived around DC for more years then I'll admit to, but I will admit that it's only when guests come to town that I hit the tourist areas, all of which you describe well. Union Station is a wonderful place, although its underground is overwhelming. Glad you had many adventures on your train trip, Jim. Will you take the train to go to Malice?

Gloria -- I worked in New York and took the train into Grand Central every day and was there while they did the rehab.

KM - I've made a note to check out the Harrisburg train station. I do get near there from time-to-time.

Joyce -- I'd love to do the capitol again, but we were there on Sunday so it was closed.

EB - We won't be taking the train to Malice because I'll be doing some bookstore signings for CABIN FEVER on the way to Malice and then continuing our migration north from there.

St. Louis and Kansas City have refurbished Union Stations that are well worth a visit.