In books, a pet can be a confidant, cause trouble or be a savior. I recall few unusual pets in mysteries--dogs, cats and horses are usually featured. Janet Evanovich’s Stephanie Plum character has a pet hamster, although I don’t think Rex ever helped solve a crime. I have read one murder mystery with a pet parrot but don’t remember the title. I do remember that the parrot mimicked human language and said words that led to the killer.

My family and I have had unusual pets and I know other people have too. Perhaps with some creativity, these novel pets might lead to a clue, a murderer or complicate a case. Here are four ideas:

When I was young I had a snail named Pearl. At that time there was a trend where snails were sold with rhinestones glued on their backs—probably not allowed today. My friends quipped, “Poor little rich snail.” Pearl liked to crawl out of her bowl and wander around at night but it was easy to find her by following the slime trail the next morning. Maybe a character with a missing pet snail could follow the slime trail and stumble on a clue or a dead body?

My niece has a snake that enjoys studying with her. What if a character’s pet snake escaped its enclosure? Perhaps it could slide under the killer’s door and wrap itself around his ankle. If the killer had ophidiophobia (fear of snakes), direct contact might force a confession. 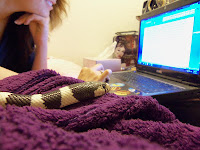 Many years ago my sister went on a Girl Scout trip to Papago Park in Arizona. She found what she thought was an abandoned kitten and brought it home to nurse back to health. The kitten thrived, gained weight…and began growing fangs. My parents took it back to the veterinarian who said that the kitten was probably part bobcat. The vet advised them to keep Fluffy because he wouldn’t be able to fend for himself in the wild. Fluffy lived a long, happy life but retained some wild animal behaviors like eating raw meat off the kitchen countertop when my mother had her back turned.

If a character owned an exotic but domesticated animal it might be falsely accused of a crime and the owner would need to track down the real culprit. If the killer threatens the owner, the pet could tap into its wild side and save him.

Many years ago our family was house hunting. In one house my mother walked in a bathroom and screamed. There was an alligator in the bathtub! It turned out to be the owner’s pet. I’ve often wondered if the alligator was a trained movie animal since a number of people in the entertainment industry lived in that town.

Perhaps a pet alligator could swallow something (or part of someone) and hinder a detective from solving a case.

Can you think of unusual pets featured in mysteries? Do you have or write about unusual animals?

I don't write about animals much in my books because I've never had pets while growing up. But, I love reading about pets and I sort of adopt my neighbor's pets sharing them a bit. Of course, I don't have to pay for anything or deal with any damage to my home so for me it's optimal. My favorites books with animals were, James Herriot's vet books, but also Donna Ball's rescue dog series and the late Blaize Clement's pet sitter series. One of her kid's is taking over writing them now. I like ordinary pets, so no alligators!

I am including one cat in my new WIP, a neighbor's cat.

I don’t have any unusual pets in my books (so far), but I think how characters relate to animals can be a good way to show personality.

As for ways to get the family pet into the story – perhaps the dog got loose and came back with some portion of a human leg – and she refuses to tell where she found her trophy.

Thank you for the suggestions, E.B. I had forgotten about James Herriot's excellent vet books. All Creatures Great and Small was required reading in school.

I look forward to reading your book and learning what role your neighbor's cat plays in it.

Good point, Jim, that animals can reflect an character's personality by how they relate to it and what type of pet they choose.

I like your rather macabre suggestion of a dog bringing back a body part. That would be a shock for an owner to see first thing in the morning while making a cup of coffee.

I had very few pets as a child. I do remember one turtle but I don't know how it could help solve a crime. In one of Nancy Pickard's books a pet bird expresses its opinion by defecting into a man's boot.

Nancy Pickard is clever to have an animal show its dislike of a character in such a memorable way. I think it’s also a good example of showing instead of telling.

I don’t see how a turtle could help solve a crime. I suppose a character could hide something very tiny under the lip of the turtle shell. Now I'm intrigued and will ask my sister-in-law who is a biologist and tortoise expert.

My protagonist has a sheepdog who is more of a comical character. I will ponder how she might help solve a crime. I think she'd like that!

I enjoy watching sheepdogs herd livestock, Carla. They are so agile. Unfortunately, I recently read that Old English sheepdogs are now on the endangered species list.