You Know You’re a Mystery Writer When… 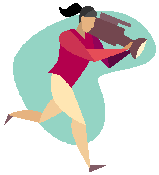 Nobody wants to watch a crime drama with you because you know whodunit in the first ten minutes and feel compelled to share.

You carry a video camera wherever you go in case you see a dastardly deed being committed. You want to record it in order to write an authentic scene.

You call the police because there is a vehicle parked in front of your house overnight with what looks like a bullet hole in the door and you’re concerned there might be a body in the trunk. (Note to self: Make cookies to apologize to neighbor’s visitor who now has to pay for a parking ticket.)

You think the cute house with the red picket fence is really a safe house. You walk by it so often trying to “sniff out” a mystery that the homeowner waits for you and says a cheery hello each time.

You pick up the phone to call the police because you believe men with a ladder are about to break into your neighbor’s house. It turns out they are contractors installing a new roof. You are now referred to as the neighborhood watch captain…but there isn’t a neighborhood watch in your area. 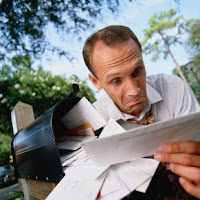 You open mail delivered to your house with someone else’s name on it because something just doesn’t feel right. According to a friend with a security clearance, opening mail addressed to another person might be a federal offense—so, don’t do this.

You see a long line of Secret Service black SUVs drive through your neighborhood and must follow them to find out where they are going. Several huge and serious looking men inside the SUVs yell and wave their arms for you to stay back—don’t do this either.

You are almost arrested by a sheriff in a case of mistaken identity and are actually disappointed not to be arrested because you wanted first-hand knowledge of being processed for your work in progress.

You spot a small woman being followed by several suspicious looking people. You run across the street to save her from being mugged only to find out that she is a well-known figure being protected by body guards. (Note to self: Schedule an eye exam and consider Lasik surgery for nearsighted vision.)

Your friends throw a surprise birthday party for you eight months in advance of your birthday…in a different state from where you live and under the guise of another friend’s birthday because they know you are always suspicious.

Has your focus on mysteries led you astray or annoyed people?
Posted by Kara Cerise at 12:05 AM

While I'm not the captain of the neighborhood watch, I have annoyed people in the past with my ability to solve mysteries well before the story reveals whodunit. I've even had a couple people try to "test" me on this skill & then get mad when I proved my mettle...well, duh! Don't test me on it, then! ;o)

That's funny that your friends test you, Alyx, and then get mad when you are right :) They'll learn...although never underestimate how far people will go. I was shocked when my friends and family threw a birthday party for me in March even though my birthday is in October. They were very pleased with themselves that I didn’t catch on.

Wow, Kara, you are THE mystery maven!

Love your posting, Kara. I usually solve the mystery in books I'm reading - without peeking at the end. And when I've gone to mystery events, I often guess who done it before others. I even won a weekend
at a resort hotel in the area, too.

However, writing mysteries has its downside, too. Once while in a visitor center in a park in Virginia, I suddenly exclaimed "I know how to poison Lucy now!" It was something I saw in a nature exhibit, I think. Anyway, my sisters were alarmed and tried to shush me while looking around to see if anyone else heard.

Also, some people hesitate about eating at my house when they see several books about poison on my library shelf.

It's good to be able to laugh at these sorts of things with people who understand.

Gloria, what a hilarious story about realizing how to poison Lucy! It sounds like your sisters were a little taken aback by your enthusiasm.

Neat that you won a weekend at a resort hotel for solving a mystery.

Once when my boss was late to work a friend and I discussed starting a raffle, standing outside his locked office door. Each participant would put in five dollars and the person who came closest to guessing how he had been killed and locked inside his office would win the pool. For some reason when he arrived he was not amused. A guilty conscience, perhaps.

Since I've been writing mystery, my friends have suddenly become literary snobs. While they used to love mystery, now that I write it, it can't be that special. I swear, I rarely say a word about my writing. Most people don't know I write. Don't know I've had stories published. I have freaked my husband our on little bits of knowledge that I have from researching for my mss.

Great story, Warren! You probably didn't win employee of the month award for the boss in the locked room raffle.

Be sure to tell people that you write mysteries before you share your knowledge on how to commit a crime, E. B. :)