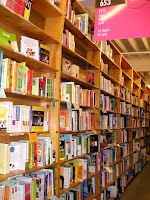 I had a personally traumatic experience the other day; I got rid of an entire bookcase of books. Getting new carpet (long overdue after twenty years) required moving my three bookcases. I gritted my teeth, cutting them back hard like pruning bushes, and donated them to a worthy organization.


Every six months (okay—every year) when I cleaned them, I would try to weed out books. But this time when I unloaded the bookcases, I had visions of my sister and me emptying the contents of my parents’ house after my mother died and my father went into nursing care. I saw my kids emptying these bookcases in years to come and decided to do them a favor.


I found the books that I threw out represented myself—stages of myself, personality traits, personas—that I once manifested. Hermann Hesse represented my metaphysical high school self portraying the budding scholar. Steppenwolf, Siddhartha, Narcissus and Goldman, I’d never read them again. The college textbooks represented the intimidated young adult out on her own for the first time. I clung to them for guidance. Lillian Jackson Braun, Janet Evanovich and Diane Mott Davidson represented the new mother who needed good diversions. There were other authors I tried once, whose books I barely remembered reading, representing the discriminating older adult who realized she had limited time on this planet.

What I kept represented my life distilled—who I was now and what I valued. Instead of keeping a series, I kept one book in the series so I would remember the author, their writing and what I liked about them. I kept books by writers who served as good examples for me as a writer; the complete works of O. Henry, Edgar Allen Poe, a large anthology of Wodehouse, a classic Ray Bradbury and a Robert Heinlein. Books that I’d learned lessons from like James Marshall’s George and Martha series and Herman Wouk’s War series. I kept Richard Russo, Ian Rankin, Peter Robinson, Sue Grafton and Michael Malone, whose writing I admire, and M.C. Beaton’s fun, Alice Hoffman’s impressionism, Robert Parker’s dialogue art, The White Album by Joan Didion, other classics like Steinbeck and the folk art of Richard Brautigan’s Trout Fishing in America.


I paused before I threw out the volumes. They spoke of a me that I was willing to let go, but whom my children didn’t know. Those books were part of my personal history. But then, I realized that the books would mean nothing to them unless they read them and understood what they represented in the context of the time and my life. My final analysis was that knowing what I read wouldn’t surprise them in the least. Besides, they’ll have my Kindle library and have to shut down that account—unless they read the books first. Doubtful. I let them go with reluctance. Perhaps those books were only important to me, and now I’ve closed those chapters.

Email ThisBlogThis!Share to TwitterShare to FacebookShare to Pinterest
Labels: books, E. B. Davis

Sometimes when I meet someone in his or her home I sneak a peek at the books on the shelves to form an impression of the person.

I can relate to this, E.B. except getting rid of the books. It's not that I never get rid of any - if I don't like a book after I start it, I donate it, but if I like an author, I keep the whole series. As for worrying about my kids in the future? Tough! That's their problem. I love being surrounded by books and often I go back to some of them to either reread or look something up. And yes, I have too many I know. I try to sell some at garage sales.

Warren, I do that, too, especially if I'm on a house tour of some kind.I'm not as interested in their decor as I am in the books they have. In fact, I'm much more impressed with a house that has books than one that doesn't.

Yes, I think books are indicative of a person (especially the lack of books). But I've changed, gone through stages, so the books on the shelf may not indicate who I am now, but who I was. That's interesting too, but I don't need a lot of paper history reinforcing my self image.

Warren, I don't sneak a peak--I blatantly check out the titles.

E.B., I started weeding out a couple of years ago because we ran out of shelf room and the piles were getting to me. As they say, breaking up is hard to do. Some of the books I got rid of, literally fell apart in my hands. Our new rule new: Every time we buy a book, one has to be donated.

It's a good rule, Anita, but I needed to reduce my total number. Although I am comforted by their presence--the sight of my books--I've come to appreciate my Kindle library. Like my photo albums, they're actually better inside my device. They never age and fall apart, they don't collect dust or insects and if I have to clear space, the delete button is easy. I'm trying not to be sentimental, which got me into an over abundance of books. It is hard.

hi,
trying to subscribe to Writers Who Kill via email. Can't get it to do it. Could you please help? Thanks!
Sandy Gardner
sgardner2@hvc.rr.com

I don't think that you can subscript via email, Sandy. If you go to our home page, hit the "Subscribe" to Posts and/or Comments buttons. You can then subscribe using your yahoo or google accounts. Let me know if you have any trouble. Although we don't like to hear of problems, we have to keep aware of issues. Thanks for letting us know.

What can I add? I wonder sometimes if having those books from different phases - the better of those at least - will give my children an understanding of things I went through, so they'll understand when I tried, understand who influenced me, and can choose to keep or disgard at will. I worry that I'll die now after so soon picking up some - only some - of my mother's books as she downsized and think that THESE were important to me, but I do want to read them when I can. I do want to understand some of the things she thinks, and how she seemed to do a 180 in life as she grew older.

You are one in a million. I doubt if there are many kids that would research their parents to that degree. Who has time? I think your kids know who you are by how you've treated them, your discussions, values and how you've lived. It takes a lot of strength or weakness (depending) to pull a 180 later in life so I can understand that you'd like to understand what happened. My approach would be to ask, if that is still possible.