Second Guessing the Why

I recently gave chair massages at FOGcon; a literary conference in the tradition of Wiscon and Readercon.  My chair was situated in a communal area, where many people sat to chat during the breaks.  This provided me ample customers while I was there, but it also afforded me the ability to be a fly on the wall of the conference, so to speak.  People would discuss the session they were just in, or one they were about to attend, which was how I learned about a panel entitled: You Are Not Your Rejection Slips.

I overheard a woman say something that I took as a wonderful kernel of inspiration.  She said "When an author receives a rejection slip s/he tends to make up all sorts of reasons why their work was rejected.  What they need to do is stop second guessing the 'why', and just accept that the piece wasn't right for the editor or publisher." 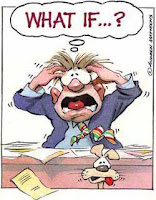 It was the "stop second guessing the why" that caught my ear most.  She was absolutely right.  I won't presume to speak for other authors, but I know that I have spent hours fretting, worrying and basically inventing reasons why my work didn't pass an agent’s muster.

My attention snared (don't worry, the person on my chair still enjoyed a wonderfully relaxing massage), I continued to listen while the people gathered around this woman refused to accept what she'd said.  One comment I heard was, "But how can we grow as an author without feedback?"

This last question was valid, but it missed the point she was trying to convey.  In this day and age--with so many editors and agents being bombarded with manuscripts--it's nearly impossible to respond with effective feedback to everyone who sends in their work.  I've read editor's blogs where even they lament about it and wish they could extend pointers to everyone.  It's just not the way the system works right now, and may never work that way again, if it ever did.

I won't expound on the point this woman (who I assume was the session's speaker) was making--she was pretty concise, in my opinion--but, I will discuss why I think authors have such difficulty accepting it.

First off, as writers, inventing stories is the heart and soul of what we do.  So it's kind of in our nature to invent reasons why things didn't go the way we hoped/wanted.  However, the bigger problem lies in our egos.  It seems to me that most authors (really, all artists) are insecure in many ways.  Yes, this is a blanket statement, but I think it's a valid one.  If we weren't insecure, we wouldn’t tear ourselves down so much--or invent possible reasons for a rejection--when someone doesn't like our work.  Heck, they don't even have to reject it . . . a non-response can be just as deadly to our egos!

Which is why I found her comment so inspirational.  Having been raised with psychology, I'm always on the lookout for ways to improve my psyche, understand myself better, and become less insecure.  It was quite an eye opener to hear this woman put so succinctly what I've been doing.  In fact, when I heard her say "stop second guessing the why," I had one of those D'oh! moments where you realize your actions aren't what you really want to be doing.  I know others have said similar things before, but something about her phraseology made me finally see it for the self-destructive choice that it is.

I’m sure her words will swim around my head when I receive my next rejection slip.  Hopefully, I will heed the message, accept the response, and not second guess the why.
Posted by Alyx Morgan at 12:00 AM

Alyx, I think you're absolutely right. This is something I learned a long time ago when I worked for a national literary magazine and then freelanced for a NY publisher. Once you've seen the tiny staff of a lit journal or the piles of manuscripts in editors' offices, you start to realize that there's really nothing personal about rejection. And you see why there can be no feedback or even personalized rejection slips (usually).

Alyx, I had a similar experience to Linda's as an e-zine editor and writing contest judge. Even with a small publication and a small contest we were inundated with submissions. There were times when I would have loved to comment but there was always a deadline for publication and pile of submissions to read.

Alyx, years ago I helped edit the ICON, a literary journal for the community campus connected with Kent State. And in January, I had to judge a category of poetry for a North Carolina poetry contest. Both were hard. Some submissions were easy to set aside, but there were so many that were good enough to be included, but we could only accept so many. In the poetry contest, it was even harder because I had to judge first, second and third place plus a couple of honorable mentions. There were no options to comment in either case.

I agree completely. I keep reminding myself that it took Edison 10,000 attempts [roughly] to make a functional light bulb. He didn't have 9,999 failures just many ways that didn't work. The other one I like is - the difference between a published author and an unpublished one is that that later gave up......

Wow, Linda, Warren & Gloria. You've all had the opportunity to see what happens on "the other side." What an amazing way to learn that it's not personal. Sounds like it would be an eye-opening experience if every aspiring author could work a publication contest at least once. Maybe then, there wouldn't be so many frustrated writers who lament about the process . . . we'd all have first-hand knowledge. :o)

Thanks for your insights!

I've heard the Edison quote before, Maddy, but not the one about the authors. That's a very good one to keep in mind when we think about throwing in the proverbial towel.

Thanks for stopping by today. :o)