A Dream of Death Review by E. B. Davis

After interviewing Connie Berry about her third book in the Kate Hamilton series, The Art of Betrayal, I knew I had to go back and read the first two books. In A Dream of Death, the first book, main character Kate begrudgingly visits the Scottish island of Glenroth, her late husband’s place of birth and death, after her sister-in-law, Elenor, calls asking for her help. If only Kate hadn’t promised her late husband she’d protect Elenor. One night after Kate’s arrival, Elenor is murdered by the same modus operandi as that of a two-hundred-year-old unsolved murder of a woman, who was proprietress of the same castle—now a hotel—that Elenor owns. Kate would like nothing better than to fly home to Ohio, but then she discovers that she is the executor of Elenor’s estate. There’s nothing Kate can do but solve the murder so she can go home. Connie’s droll humor shines through.

All I could do was forgive and move forward.

Well, that was easy. Conquering Grief and Guilt in Two Simple Steps.

Now I could tackle other challenges, like solving the mystery of the Bermuda

Triangle and finding the remains of Jimmy Hoffa. 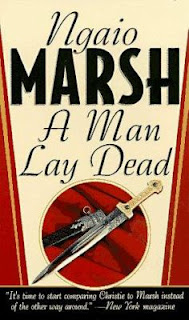 I decided to check out a novel from England’s Golden Age of Mystery fiction. I read A Man Lay Dead, the first of a long line of mysteries (1934-1982) by Ngaio Marsh, one of the Four Queens of Crime (others were Agatha Christie, Dorothy L. Sayers, and Margery Allingham.) Set between the two world wars, A Man Lay Dead is a country house mystery prevalent at that time. I thoroughly enjoyed it because Marsh took me back to an earlier time when mysteries rolled out their puzzle in a slower, more cerebral way.

Everyone knows Sir Hubert Handesley throws the most wonderful parties at his country house. He invites a group of people for the weekend and announces they will play The Murder Game. One person is a pretend killer, one a pretend victim, and the others are sleuths who must figure it out. Added to the mix is a subplot of two Russian characters. Sure enough, a real murder takes place when one of the guests is stabbed with an intricate Russian dagger. But no need to worry. Inspector Roderick Alleyn is one of the guests. He fits in perfectly with his expensive classical education, posh accent, and soft-spoken voice. The question is, can the reader solve the murder before the murderer is revealed? Fortunately, I did.

In Kathy Reichs’ twentieth Temperance Brennan novel, The Bone Code, which releases July 6, a medical waste container containing two decomposed bodies wrapped in plastic sheeting and bound with electrical wire washes ashore during a hurricane in South Carolina. The presentation is identical to an unsolved case Temperance worked fifteen years earlier in Canada. At the same time, the citizens of Charleston are being randomly struck by a flesh-eating disease. Temperance’s investigation not only reveals a link between the two sets of murders, but possibly the biological pathogen, too. This fast-paced crime thriller more than aptly has Temperance balance forensic anthropology, scientific research, and the romantic side of her life.


Will My Cat Eat My Eyeballs? Review by Jennifer J. Chow

Morbidly fantastic. There are questions about death I never knew I needed answered. That’s the beauty of this enlightening book by Caitlin Doughty.

Topics include displaying people’s skulls, dying on a plane,  and donating blood after death. I also love how these are honest questions posed by kids—who are consistently curious.

A strange and wonderful book about death that is both candid and humorous.

Murder, She Wrote: Killing in a Koi Pond Review by Grace Topping 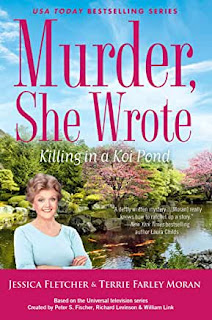 It takes a brave writer to take on a much-loved mystery series with over fifty books and two hundred fifty television episodes. But that is what Terrie Farley Moran did, becoming the third author to write books in the Murder, She Wrote series. Fans of Jessica Fletcher will be delighted with the latest entry in this long-running series. In Murder, She Wrote: Killing in a Koi Pond, Terrie has done a superb job of capturing the voice of Jessica Fletcher. As usual, Jessica goes to the aid of a friend and cracks the case, but not before taking readers through a complex case with numerous suspects. I listened to the audiobook version of Killing in a Koi Pond and enjoyed it immensely. The narrator, Laural Merlington, does such a splendid job mimicking actress Angela Lansbury, I felt as though I were listening to an episode from the television series.

Murder, She Wrote: Debonair in Death by Terry Farley Moran comes out in November. I’ll be waiting for it.

Former IRA bank robber Richard O’Rawe spins a heist tale of how to empty the vaults of the Northern Bank in Belfast. Aided by his former IRA comrades and uncle, Panzer O’Hare, James “Ructions” O’Hare sets up a “tiger kidnapping” targeting the families to two key bank employees to help him gain access to the bank.

O’Rawe supplies a backstory filled with kangaroo courts, money laundering, cigarette smuggling, double crosses, and an IRA storage bunker on a farm. Though O’Rawe’s use of the present tense and a plethora of characters is confusing, once the meticulously-planned heist is in play, the reader can sit back to enjoy plots twists and turns of a fictional bank robbery of the century.

The Plot Review by Marilyn Levinson

Touted as an Amazon Best Book of May 2021, The Plot by Jean Hanff Korelitz is a cautionary tale of what can happen to a writer who steals a plot from one of his writing students. After becoming the author of a well-respected novel, Jake Finch Bonner is unable to come up with a follow up winner. When he learns that Evan Parker, one of his students, has died, Jake uses his plot to write a blockbuster of a novel. He would be thrilled with his new-found success and his new wife if only someone wasn't sending him messages reminding him that he was a thief. Jake starts to investigate and manages to figure out the story behind the story. Though I figured out the ending just before the big revelation, I found this a suspenseful read.
Posted by E. B. Davis at 12:30 AM

Excellent suggestions for my TBR pile. Thanks.

My TBR is tottering. What wonderful suggestions!

Great suggestions! Marilyn, I read THE PLOT. Though Korelitz's writing is amazing, I figured out what was going on early on. Lots of mystery/thrillers about plagiarism hitting bookstores this summer. A recent Washington Post review listed four or five.

Fabulous suggestions! Thank you all. Jen, I'm now hooked on Doughty's writing - so macabre but droll, too!