An Interview with Leslie Budewitz by E. B. Davis

In her Food Lovers’ Village Mysteries, Agatha Award-winning author Leslie Budewitz introduces us to Jewel Bay, a tight-knit Montana community that thrives on tourism and farm-to-table fare. Featuring Erin Murphy, beloved proprietor of the Merc—a century-old general store converted into a local foods market—each book brings us closer to the folks who call Jewel Bay home, and the cunning culprits in their midst.

In this delicious new collection of five short stories and one novella, she takes us further into the heart of Jewel Bay—from the playhouse to the Merc, from funerals to food festivals—with equal parts humor, suspense, and compassion, and no shortage of murder to spice up the menu . . .

In Carried to the Grave, a long-hidden family secret refuses to be put to rest.

Jewel Bay’s community food festival serves up the perfect opportunity for a devious killer with an appetite for murder in Pot Luck.

In The Christmas Stranger, a small gesture by a mysterious man turns out to change lives . . . and much more.

A romantic getaway to a secluded beach town in Mexico provides a deadly remedy for a couple’s trouble at home in A Death in Yelapa.

As the local playhouse opens for the season, it’s curtains for a stage manager with a secret in Put on a Dying Face.

And in An Unholy Death, when Kate and Paddy Murphy open Murphy’s Mercantile in 1910, they know making a go of it in rough-and-tumble Montana will be hard work, but for a local preacher, it’s murder. 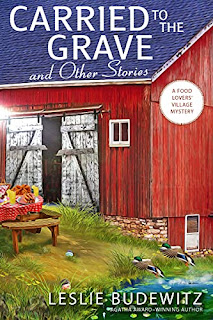 Leslie Budewitz’s collection of short stories and a novella, Carried To The Grave and Other Stories, shows different aspects of the characters and the town of Jewel Bay, the setting of the Food Lovers’ Village mystery series, and the series’ basis.

One short story, “The Christmas Stranger,” gave me goose bumps. It is a story of unexplainable coincidences, but it also answers a question that main character Erin has about her father’s death. My reaction is the sure sign that the story teller did her job well.

I never expected the last novella. “An Unholy Death,” set in the early twentieth century, provides readers with the origin of the Mercantile (Merc) and shows the integrity of Erin’s ancestors, Paddy and Kate, from whom Erin inherited her crime solving abilities.

“Carried To The Grave”

Are huckleberries sweet or tart?

Ah, the wild huckleberry, a fruit worth the considerable effort of hunting and gathering. It’s tart with a hint of sweetness. Imagine a wild blueberry, one you had to hustle to pick before the bears beat you to it.

When the truth is obvious, why stick with a lie?

In this particular case, the older generation of Taylors, the family of Erin’s friend Wendy, knew the truth because they’d been eyewitnesses, but it wasn’t obvious to everyone. What happened---and I’m trying to avoid spoilers---was not uncommon in that era;  I know of several instances, including one a few generations back in my own family. Thank goodness attitudes have changed.

Do extreme times, such as during wars, change morals or social acceptability? If so, then why hide truths originating from that time?

I suspect they do, although the importance of keeping the secret in this instance has less to do with the war itself than with the family’s desire to protect Gwendolyn and Corinna from gossip and shame. When we look through the modern lens, we think “oh, people would have understood.” But it’s clear from real-life accounts that that was not always true.

Do you have a recipe for Elk Medallions with Mustard-thyme Cream Sauce? Does elk taste like deer? Is it tougher? How does buffalo compare to beef?

Elk is delicious! Much tastier and more tender than venison. Buffalo is a lot like beef, but leaner and more flavorful. Sadly, I have never made the dish Nan brings to the festival, but when I spotted a similar recipe in a local community cookbook, I thought it would be perfect.

Do you believe in divine intervention?

You have to wonder sometimes, don’t you?

Readers of the Food Lovers’ Village novels may remember the Easter twins, Bernadette “Bunny” Easter Burns and Polly Easter Paulson. They are Erin’s old classmates, still friends, and delightful women with fingers in all the town’s pies. I’ve enjoyed playing with character names in this series.

If there are enough coincidences do they add up to miracles?

Or do those who don’t believe in miracles dismiss them as coincidence? It’s clear to me that there is much in this world we can’t explain. Erin’s encounter in the UPS store actually happened to me; I’d been reading Anne Perry Christmas novellas and then watched It’s a Wonderful Life, and I suspect readers will pick up on both influences.

Who would drink a beer called Moose Drool?

You’d be surprised! It’s a tasty brown ale made by Big Sky Brewery of Missoula, where the brewers enjoy word play as much as I do.

Is taxidermy still big in Montana?

That I couldn’t say, not being a hunter, but mounts ranging from a small red fox to a bull moose adorn the walls of the local restaurant that inspired the Jewel Bay Inn---the original, destroyed by fire in 1937, makes a brief appearance in “An Unholy Death”---and at Christmas, they do get into the holiday spirit. 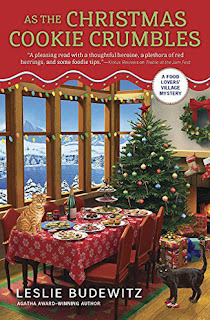 “A Death in Yelapa”

Have you spent time in Yelapa? Where is it?

Yelapa is a small town on the southern end of the Bay of Banderas, about an hour’s boat ride south of Puerto Vallarta, and yes, I have been there with my own Mr. Right. As Erin says, it’s a taste of paradise.

Not on your life!

Absolutely! There’s a pot growing on the back porch right now.

“Put on a Dying Face”

Is the Merc the oldest business in Jewel Bay? Is it the heart of the town?

The bank predates the Merc, although in both Jewel Bay and Bigfork, its inspiration, the bank long ago outgrew its 1908 building, which is now a restaurant. But the Merc’s history adds to Erin’s sense of mission and her determination to keep it going. Old buildings are a constant challenge to keep up, and I’ve tried to make that part of the story, particularly in the novels Death al Dente and As the Christmas Cookie Crumbles.

Who said that laughing in the middle of tragedy shows humanity?

Erin is musing about the tragedy and remembers Sheriff Ike Hoover’s comment to her, years ago, that “if violent or untimely death didn’t bother you, you were a poor excuse for a human being.” Something funny occurs, and she flips his observation to say that laughing is equally important, and I think she’s right. Hoover was the deputy who investigated her father’s death in a hit-and-run when Erin was seventeen, a case that went unsolved until she identified the culprit in Butter Off Dead, the third in the series, and the two share a deep respect.

In August of 1910, wildfire swept through the Northern Rockies, burning more than 3 million acres of heavily timbered land in Idaho, Washington, Montana, and British Columbia, and killing 87 people, mostly firefighters. The Great Fire, also known as the Big Burn, increased support for the fledgling US Forest Service and led to major developments in fire management and conservation. Scarred mountain slopes are still visible in these parts. Several books and documentaries cover the fire, most notably The Big Burn: Teddy Roosevelt and the Fire That Saved America by Timothy Egan (2009) and “The Big Burn,” in PBS’s American Experience series.

I know licorice is an old-fashioned candy, but doesn’t it taste awful and gives the eater a black mouth? Clear Toys or peppermint sticks are far better!

Licorice sticks were a great treat in pioneer days, and I imagine for some kids, the black mouth was part of the attraction! But like you, I’d probably have chosen something else.

Paddy immediately sees the dog Buster as protection for his wife and orphan Grace. But Buster is more than protection, he’s smart, isn’t he?

You’re right. Like many dogs, Buster senses when someone might pose a danger to his girl, Grace, and it doesn’t take long for him to extend that protectiveness to Kate. A protective man, like Paddy, can spot that instinct in a heartbeat.

Those with physical deformities or other impairments are seen as bad or criminal in the early 1900s. Was it fear of their differences that caused people to assume the worst?

Fear does seem to be part of such cruelty, doesn’t it? The physically or mentally disabled have been seen as touched by angels in some times and cultures and touched by the devil in others.

What’s next for Erin and Adam?

They are planning to go skiing at a historic lodge in a still-unnamed short story that will be part of Murder in the Mountains: A Destination Murders Short Story Collection edited by Karen Cantwell and Cathy Wiley, slated for February 2022. After that, who knows? 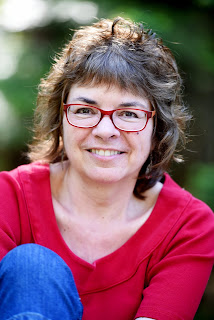 What a great collection! I look forward to reading it.

Delightful, Leslie. What a great idea (and boon for your readers) to feature these stories. Looking forward to a great read!

Thanks, Margaret, Kait, and Molly -- and thanks as always to Elaine for a terrific interview!

Looking forward to reading this, and your other upcoming work, Leslie. Thanks for stopping by WWK.

Congratulations, Leslie, on another terrific-sounding publication.

Thanks, Shari and Grace. I never actually thought of myself as a short story writer until a few years ago -- you both know me, so you know IRL I have trouble keeping things short! -- but writing short stories has turned out to be great fun!

Another area of writing skill for us all to enjoy!

Sounds like a great collection. I love short stories & I love Leslie's work, so this is a must-read.

Thanks, Debra and KM. (BTW, I just gave a character in the WIP, the 6th Spice Shop mystery, the last name of Rockwood!) I'm particularly happy when other short story writers like my work.