Peter Robinson's IN A DRY SEASON 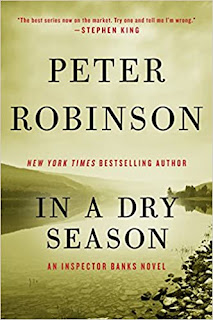 I had watched ITV productions of DCI Banks, but had never read Peter Robinson’s books, on which the television series is based. In a Dry Season, published in 1999, is one of his best.

Alan Banks is in the midst of his own dry season, recovering from his wife’s recent departure and estranged from his son. His unprofessional conduct on a previous case sends him to a rural part of Yorkshire, where serious crime is a rarity.

The area has a prolonged drought, or dry season. A reservoir covering the hamlet of Hobb’s End recedes enough to explore what is left of the original stone buildings…and reveal a skeleton. Though similar to the premise of another British crime series, The Unforgotten, Robinson delves more deeply into his point of view characters. DCI Banks is determined to identify the skeletal remains of a young woman. He and DS Annie Cabbot track down former residents of Hobb’s End, who lived there during World War II. Land Registry and parish church records reveal the victim’s name. The book was published in 1999, before electronic data bases and DNA registries were available to law enforcement.

“Banks paused and tried to frame his nebulous thoughts. ‘Gloria Shackleton. I know what she looked like. I’ve got some idea of her character and her ambitions, who her friends were, the things she liked to do to amuse and entertain herself.’ He tapped the side of his head. ‘She’s real enough for me in there, where it counts. Somebody took all that away from her. Somebody strangled her, then stabbed her fifteen or sixteen times, wrapped her body in blackout curtains and buried it in an outbuilding’.” p.218

Reading the book is a master class in writing multiple points of view. In addition to Banks and Cabbot, the victim’s sister-in-law provides three different narrative perspectives: as Gwen, she writes in first person about the war years in the small Yorkshire village, when the young women attend parties with RAF and later, American Air Force personnel. After the village is flooded, Gwen writes a memoir about Hobb’s End. And in the present day, Gwen is an accomplished novelist using the pen name Vivian Elmsley, who fears the consequences of identifying the Hobb’s End skeleton. To gain insights into a complicated woman, Banks reads Elmsley’s novel before he interviews her:

“Despite the thinness of the plot, Guilty Secrets turned out to be a fascinating exploration of conscience and character. Because of the situation he finds himself in, the central character is forced to reexamine his entire life in relation to the crime he got away with, while at the same time agonizing over what to do to secure his future. To complicate matters, killing does not come easy to this man.” p.322

Robinson deftly moves back and forth from Gwen’s narrative to Banks’s investigation, and near the end of the book, includes Gwen’s memoir written twenty years earlier, which may be the whole truth or an embroidered version of the truth.

“Soon, darkness infused the woods around me, filling the spaces between the branches and the silences between the bird calls. A whisper of a breeze sprang up. The water caught the fading light in such a way that its slightly ruffled surface looked as if it had been sprinkled with salmon-pink powder. Slowly, even this darkened, until only a deep inky blue remained. Then a full moon rose, scattering its bone-white light, in which I fancied I could see clear through the water to the village that used to be there, like an image preserved in water glass…In my vision, I could even see our little shop, where I met her for the first time that blustery spring day in 1941. The day it all began.” p.3-4

Readers and writers, are you familiar with DCI Banks from the TV series or Robinson’s books?

I loved that book, and right now we're watching the series on Britbox. Robinson's skill as a stoyteller is amazing.

I don't watch much TV, but this may be something to check into.

Not familiar with this one... thanks for introducing me to something new.

Connie, I like the book version of Alan Banks.
Kathleen, I highly recommend the series, which we saw on DVD's from the library.
Debra, excellent writing and setting, right up there with William Kent Krueger.

Can't wait to read this. Thanks for the review, Margaret!

I love this series by Peter Robinson. This book was especially good. So--we found the series on TV--I was hyped. I told my husband that he'd love it. And then we both were horrified. I glad you liked it Margaret, but the books were so far superior than the TV series. Everything on the screen seemed so much for violent and graphic. They didn't play up his family life. There weren't the nuisances among the staff that kept the team together and moving. I was embarrassed after bragging so much about it. At least we have the books. My advise--if you love the series--don't watch it on TV. Read!

I've seen episodes of this series but have never read any of Peter Robinson's books. On my TBR list for sure.

Molly, it was published in 1999, but it's on my "how to" bookshelf with Wm. Kent Krueger and Jacqueline Winspear.
Elaine, I've seen the TV series and liked it well enough, though prefer Vera, Shetland, and Line of Duty. I adored this book.
Marilyn, I hope you enjoy the book!