Bringing Back Some Friends by Susan Van Kirk

“This past week, I’ve had the pleasure of seeing the last installment of my Endurance Mystery series launch. Death Takes No Bribes is the finale of a trilogy that began with Three May Keep a Secret and Marry in Haste. I’ve been fortunate to have steadfast readers who have stayed with me through this series, beginning to end. I thank all of you who’ve followed the adventures of Grace Kimball and TJ Sweeney. It was my intention to create a series of books celebrating the strength and friendship of women. In that respect, I’ve surely succeeded.

Despite its end, I’ve learned so much in the last four years of my work on this series. But still, the most important and satisfying part of this experience has been sitting down at my computer typing away as I put words into the mouths of Grace Kimball and TJ Sweeney. I’ll miss this entire group of characters as I venture into a new series without them. As we all know, life is filled with hellos and goodbyes, even for fictional friends.”

And now it’s 2021. I still remember, when I first began writing this Endurance series, having lunch with 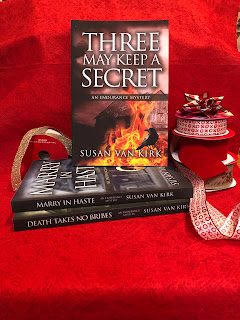 a friend while describing the first book to her. She said to me, “You talk like these people are real.” And, indeed, they are. In my head. Since the series ended, I’ve seen A Death at Tippitt Pond published, and I’ve written a new series about an art center beginning with Death in a Pale Hue. It’s the first of a three-book contract with Level Best Books and will be out next summer, followed by two more books in the Art Center mysteries.

I finished Death in a Pale Hue last year and began wondering what to do next. I could start on the second book in the series for Level Best Books, but it won’t be out until June 2023. I’ve always been motivated about what’s coming up, but that’s a bit too far even for me.

Of course. I have some time to take a side trip and write a book that will give me pleasure. Unlike ever before, the title came to me immediately—The Witch’s Child. Sounds kind of spooky, but Grace Kimball and TJ Sweeney will be together again. And while I’ve aged four years, through the magic of fiction, they’ve only aged a year.

It’s been great fun writing about characters I abandoned years ago. They don’t hold a grudge. The second chapter in this book is a leisurely walk around the downtown of Endurance, with the square that is really a circle, and Gimble’s Paint and Wallpaper store that started off Three May Keep a Secret. And, oh look, there’s the Second National Bank of Endurance on the corner, no longer under the direction of the Folger family since the president was murdered last year in Marry in Haste. Before I’m done, I’ll add something about the high school where Grace worked for so many years, the scene of a murder last winter in Death Takes No Bribes. 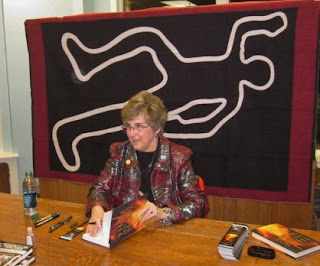 The gang is all back, including Mayor Blandford, who still gives long-winded speeches about the town’s glorious history; Nub Swensen, who drives a frustrating fifteen miles per hour around town; and Charlie Sims, a retired farmer, who seems to know what’s going on all over town. This book has given me a little time to wax nostalgic about Endurance and characters I left four long years ago.

For sure, Lettie Kimball, Grace’s former sister-in-law, will be back to frustrate Grace, and her boyfriend, Del Novak, is starting to think about marriage. Then there’s Grace’s recent boyfriend, Jeff Maitlin, who’s still running the Endurance Register. Could wedding bells be in the future for him and Grace? Hmmm.

The Witch’s Child is headed to my editor at the beginning of August and out to my readers possibly in late September or early October. That’s the plan for the moment. I’m hoping my readers will be as thrilled as I am.

Have you read a series that ended even though you’d love to see it resurrected?

How wonderful to be revisiting old friends, Susan! I always say, "Never say never" when it comes to the end of a series!

Annette's right (again) about never saying never. Have fun getting your friends to the print stage!

What a wonderful glimpse into the lives of the Endurance characters. I’d be happy to see them return.

I very much wanted Margaret Maron to resurrect Deborah Knott and the crew. Of course, that can never happen now. I’m hoping Edith Maxwell changes her mind about the Quaker Midwife series. As a writer, I understand how characters can run their course, or contracts end. As a reader, well, both heels are dug in and I’m screaming “more.”

At a book event, she described loading her kids in the car to find the perfect spot to dump a body in the Chattahoochee River.

Thanks, Annette and Jim. I imagine you are speaking from experience!

I agree with you, Kait, about both of those series. I was especially sad to see Edith's Quaker Midwife series end.

Not sure, Margaret, I've ever taken children to look up body dump locations. They do give me words to use in my books, but that's about all. What a great story about Trocheck.

Looking forward to visiting again with your old friends! I enjoyed their adventures so far.

Congratulations, to you and to us readers! I love getting to spend more time with favorite series characters. And I must say your title "The Witch's Child," has hooked me already. Take my money!

Thanks, Molly and Judy.

thrilled you are bringing back the Endurance gang ... I always liked Grace and her family/friends. I'll be one of the first in line to get a copy.

A beloved series ending is always sad, and a return a welcome surprise.

When I love a series, I pretty much want it to NEVER end.