An Interview With Ginger Bolton

There is something special about a good mystery that features food—and what could be more appealing than reading about all types of donuts? Ginger Bolton in her Deputy Donut mystery series takes us into the world of donut making and murder. Throw in a few police officers and you have the perfect recipe for an intriguing mystery. While reading one of Ginger’s books, don’t be surprised if you find yourself checking online for the location of the nearest donut shop.

Beyond a Reasonable Donut 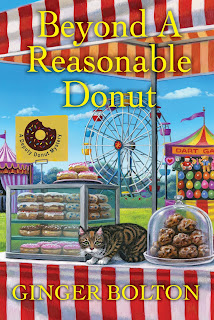 Selling her corn fritters at a carnival, Deputy Donut Café owner Emily Westhill faces off against a murderer who doesn’t play fair…

Emily and her assistant, Nina, are looking forward to manning the Deputy Donut tent at the Faker’s Dozen Carnival in Fallingbrook, Wisconsin—a festival held on Friday the thirteenth to celebrate good and bad luck. But Emily has barely dropped the corn fritters in oil when bad luck boils up. First, their bucket of confectioner’s sugar disappears—and then while a mime creates a distraction, a magician robs their cash register.

After the carnival, their misfortune continues. Emily discovers that someone has broken into artist Nina’s loft and vandalized a large painting in progress with the bucket of stolen sugar, which is now on the head of the mime, who seems to have been suffocated. Emily would bet Nina was the intended victim, but the cops think Nina silenced the mime. Now Emily must catch the killer white-handed—before someone else kicks the bucket…

Welcome back to Writers Who Kill, Ginger.

Thanks for inviting me! It’s good to be back.

Beyond a Reasonable Donut is the fifth book in your Deputy Donut mystery series. What is the greatest challenge you face sustaining a mystery series? 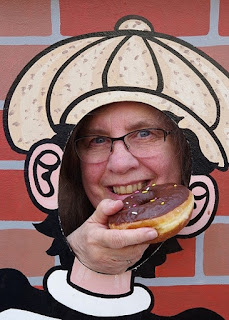 Putting my characters through yet another stressful time.

What inspired you to make Emily a young widow and the co-owner of a donut shop? Are you a big fan of donuts?

First, yes, I’ve always loved donuts. I attempted making some at around the age of fourteen. After that failure (not a failure if you like chomping on hockey pucks), I knew for certain that donuts had to be purchased and could never be made at home.

Then, much more recently, author Laurie Cass mentioned Cops & Doughnuts, a bakery in Clare, Michigan. It had been about to go out of business. All nine Clare police officers pitched in to buy and run the bakery. As soon as Laurie mentioned it, a donut-sized lightbulb went off in my head. A donut shop run by cops and/or people close to cops would be a great place for an amateur sleuth to collect clues and eavesdrop on conversations. Of course, I visited their bakery, and of course, I tried their donuts, and of course, I posed in one of the cutouts in front. https://copsdoughnuts.com/about/ And in case you are wondering, their donuts are perfection.

A former 911 operator and detective’s widow, my main character Emily Westhill has first responder friends who might help or hinder her investigations. Her business partner, Tom, is her late husband’s father. Tom is the town’s retired police chief and was, like his late son, a detective. Tom tries to prevent Emily from snooping around and placing herself in danger. Emily would never purposely place herself in danger. . . .

When I started writing the series, I got a deep-fryer and learned to make donuts at home! They can also be baked, but (ahem) baked donuts are not as indulgent as deep-fried ones. 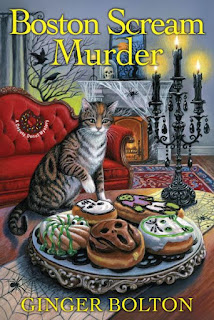 I made that up. It’s a play on “Baker’s Dozen,” thirteen instead of twelve. Faker’s because the carnival is held on Friday the thirteenth and celebrates good and bad luck. The “fakers” at the carnival include magicians and a mime whose story doesn’t end well. At the fair, Emily and her assistant are selling thirteen corny fritters for the price of twelve.

I love the recipes you include at the end of your books. In this book, you included a recipe for Corny Fritters, which calls for smoked paprika, black pepper, and chili powder. An option is to sprinkle them with granulated or confectioners’ sugar. Do people actually eat these savory donuts with sugar?

I like them with just enough sugar to wake up the taste buds. I’m amazed at the variety of foods served at fairs and carnivals. My Threadville novel, Threaded for Trouble, ends at a fair. I wrote that someone at that fair offers deep-fried fruit-flavored gelatin for sale. I thought the idea was outlandish and would cause readers to smile, but no one would actually attempt to make it. Before my book came out, I read about someone serving deep-fried gelatin at a fair. Hmmm. I can think of a couple of ways of making it work. Maybe.

What’s the most unusual donut recipe you’ve included in a book? Do you create your own recipes?

I’m not sure it’s unusual, but my favorite original donut recipe is the one for Black-and-Whites from Goodbye Cruller World. The dark chocolate, cream-stuffed donuts are baked, so you don’t need a deep-fryer. I do create my own recipes, but I have to tell you--writing entire books is almost easier than remembering to write down all the ingredients and steps in a recipe.

With so many books in the series, do you find yourself running out of donut recipes? Who does your taste-testing?

In each book, I mention donuts that Emily, Tom, and their assistants make, then I choose the ones that might appeal most to home cooks. I find taste testers for my donuts wherever I can, but I have to try all of the results, several times, myself. It’s hard work, but someone has to do it.

This is the second series you’ve written. I remember fondly The Threadville Mysteries, featuring murder and mayhem in a village of needlecraft shops. The first in that series, Dire Treads, was nominated for an Agatha Best First Novel Award and the Bony Blithe Award in 2012. Did you find it difficult transitioning to a new series with all new characters? 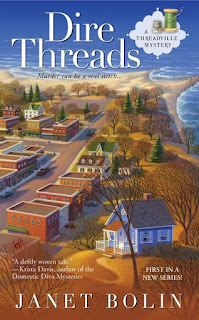 It wasn’t difficult. I enjoy returning to previous settings and characters and handing them new challenges. Writing subsequent books in a series is easier in some ways because I already know the characters and what they would do in a situation.

Starting a new series is easier in a different way—I have the freedom to invent and explore new characters and settings, and I’m not bound by what I wrote in previous books.

Deputy Donut, “Dep,” Emily’s tabby cat, makes appearances in each book. Do you find having a cat in your series and on your covers draws more readers? What is it about cats in books that readers love?

I’m sure that the adorable kitten on the cover of Survival of the Fritters helped readers want to read that book. Every time I see that kitten, I melt. And the artist, Mary Ann Lasher, has done a spectacular job with Dep on every cover.

Real-life cats are unique characters. They can be funny and endearing, and they tend to have traits that all readers who are owned by cats easily recognize. Our main characters’ pets can make readers feel close to our human characters.

Besides, readers and cats really go together. A book in your hand, a cup of tea by your elbow, and a purring cat on your lap...

What is the nicest thing a reader or reviewer has said to you about either of your series?

People have said such wonderful things that it would be hard to choose. I love it when they say they’ve been entertained, because that’s my main goal. 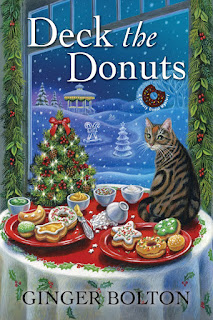 With a number of books in the Deputy Donut series, are you giving any thought to perhaps a third series?

I have more ideas for series than time to write them!

What’s next for Emily Westhill and her friends?

Christmas preparations, a blizzard, hosting stranded passengers after a tour bus goes off the road, and a deadly ice sculpture nicknamed Frosty the Donut... Is Emily’s houseguest an innocent victim or a murderer? Deck the Donuts will be on store shelves on October 26, 2021, and is available for pre-order now.

For more information about Ginger Bolton and her series, visit her at www.gingerbolton.com

Congratulations to Ginger on her upcoming release! Great interview, Grace.

Now I have to go get breakfast. I wonder if they have donuts?

These sound delicious and are now on my TBR list. Thank you for visiting, Ginger.

Thanks, Ginger, for joining us at Writers Who Kill. It is always a pleasure catching up with you and your latest books.

I love the idea of a Faker's Dozen! Congratulations on a fun series, Ginger.

Wonderful interview, Grace! So happy to learn more about your books, Ginger!