Dogs in Mystery by E. B. Davis

My fellow bloggers know I recently became a grandparent to a dog. I’ve always enjoyed pets in mysteries, perhaps living vicariously through those main characters and their relationships with their animals. I’ve never had pets so I’ve avoided using them as characters in my manuscripts. My fear is that my lack of experience with dogs would be apparent to pet-owner readers. But now, after six weeks of caring for a dog, I know why so many cozy mysteries include pets, especially dogs. Pets not only add a dimension to the coziness of those mysteries, but the pets can help their owners investigate. I want to enumerate my findings, but like any grandparent, I must first tell you a bit about my grand-dog, Rocky.

Two months ago, my daughter, Audrey, rescued Rocky, a Corgi/Beagle mix, from foster care. Rocky’s former owners had two dogs. When the mother of the family died, Rocky was put into foster care with a rescue operation. He is seven-years-old and very well trained. His stay in foster care lasted for only a few days when Audrey adopted him. We believe Rocky was the mother’s dog. He loves women over men and hangs out in the kitchen watching my every move while preparing and cooking meals. He has separation anxiety when left alone, which we now understand from other owners of rescued dogs is a common problem. We also believe the mother was at home full-time, and he had the companionship of the other dog. Although he was crate trained, the dogs shared a large crate. But without the other dog, crate training isn’t very effective. When left alone, he becomes morose and woeful.

When he first came to our Hatteras beach house a month after Audrey took ownership of him, I think Rocky was still in mourning. I don’t think he understood his abandonment was not his fault—he didn’t do anything wrong (at least that’s what we think is his perception). I’ve always had the idea that dogs could be smart and soulfully empathetic. Rocky has confirmed those notions. But not all dogs are so smart or as astute to their owners as Rocky.

From what I’ve learned from Rocky, I’ve compiled a list of ways that dogs and their needs can aid amateur sleuths. For those of you who are experienced with dogs, most of my observations will probably be no-brainers.

1.     People have discussions with their dogs. No matter how nuts, people talk to their dogs. Thinking out loud enables the main character to express his/her impression of people and use their logic to try out theories of the crime all the while including the reader. It doesn’t matter that the dog can’t contribute. Although they can nod or change their facial expressions. Readers can decide if they agree or disagree with the main character’s findings and logic.

2.     Dogs do have opinions of people. They can react to someone in a positive or negative way so taking the dog along in the investigation can be helpful. Owners know by how the dog reacts whether or not the dog likes or trust the new person.

3.     Due to a dog’s need to walk/exercise and use the facilities, dog owners are thrown together in the neighborhood or in dog parks. People talk to each other while tending to their dog’s outdoor needs. There are also those times when walking the dog allows for snooping. While I was walking Rocky, I noticed no one around. The neighbors had gone out for the day. All was quiet. We ducked under an unoccupied rental house to explore its sound-side views. I looked back into the neighborhood and caught our jerkwad neighbor on someone else’s property pulling out utility flags that had been place by a surveyor, something the homeowner had paid for. Like I said, he’s a jerkwad hatwack—not just my opinion. The jerkwad has become notorious. In a small place like Hatteras Island, reputations are important. So, you can also observe as well as interact with others while dog walking.

4.     The nose knows. Dogs noses can find evidence. Rocky unearths stuff we’d rather he didn’t, but in a mystery, his ability would be awesome.

5.     More commercial places are allowing dogs. Pet stores, ACE Hardware, the beach, and many bars and restaurants, especially if they have outdoor seating, are becoming pet friendly. People are curious about dogs. Many people come up to Rocky and extend their hands. They want to learn about him. Through their curiosity, asking questions, main characters can in turn ask people questions. Since they started the questioning, they can’t very well object.

6.     Protection—I’ve unfortunately had run-ins with bad dogs. I even wrote a short story about one terrible experience. A few summers ago, the brother of a beach friend of mine and his family came for vacation with their dog. They always violated the leash laws. When they were in the ocean, I was sitting in my low beach chair. Their dog came up to me, he was at the level of my throat since I was sitting, leaned into me, and growled. Luckily, my friend’s husband was sitting nearby. He yelled and took hold of the dog. Since then, I’ve avoided the dog, opting not to sit with them on the beach when they visit.

This summer, my friend reassured me that the dog had matured, settled down, and mellowed. I decided to trust her judgment. Rocky was sitting next to me when the dog charged. I’m unsure if the dog was lunging at me or Rocky. Even though Rocky was the smaller dog, he didn’t back down. Rocky doesn’t bark. I’ve never heard him growl—until then! That little dog howled and growled. The dog lunged for a second time. Rocky, the middle-age male that he is, wouldn’t put up with the designer dog and kept his defensive stance. Finally, the dog’s owner grabbed his collar. Like my neighbor, the dog is a jerkwad, at best. Mighty Rocky is my hero!

7.     Comic relief—dogs’ antics never end. We have Rocky on a long leach attached to a sand spike so he can roam. He’s quite good at tying us all up in his leash while we are sitting on the beach. The chairs, umbrellas, and tables become bound up. We’ve taken to moving the tables and chairs once the leash makes a Cat’s Cradle of our beach settlement. It’s easier than winding the dog back through his path.

In my next manuscript, look for Rocky as a character. We didn’t know what we were missing, even if they are a lot of work! Do you include your pets in your manuscripts? 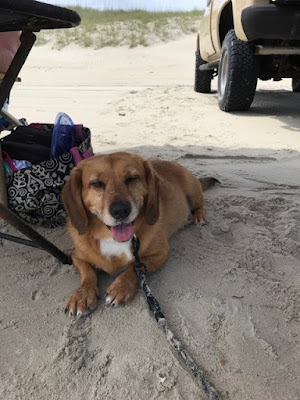 Rocky can play peekaboo! I put that at 12-18 month child intelligence!

P.S. The Caroline Crimes Anthology, for which I wrote three stories before submitting one--I got into the anthology!! Look for "Stevie and Keith for the Save."

Rocky is adorable and it sounds like he’s adapting well to his new family!

My manuscripts all feature cats, they're a part of my life so it's natural to include them. My first series, The Catherine Swope mysteries, feature dogs and cats. After all, Catherine’s first career after leaving law enforcement was a dog walker.

Yeah Rocky! Since Seamus McCree lives alone and travels some, a dog isn't practical, so I gave him a grand dog instead -- a golden retriever.

Rocky for the win! He's a happy beach dog.

Yes, dogs in my books and stories, standard poodles, black labs, and in a few days, the Cane Corso Herschel.

There are so many ways that dogs can facilitate cozy mysteries. I've read them, but until we got Rocky (leaving next week with my daughter--alas!) it never occurred to me just how useful they could be!

So happy Rocky found his way into your lives. I love what you’ve discovered about writing through him. I think you’re a terrific grand(dog)parent!

Rocky and you were lucky to find each other!

Rocky and you are a matched scream. Definitely expect to see him in your next wip. We don't have any pets at this time, but I've found that they truly fit into my Sarah Blair series. From One Taste Too Many to the newly released Four Cuts Too Many, the series wouldn't be the same without RahRah and Fluffy.

I try to be a good grandparent, but I must admit to slipping him one too many treats. My daughter gives me "instruction" about my bad ways. To her I say, "Grandparents' prerogative!"

Pets have always been part of my life and often part of my stories. It's especially fun to write a story from the POV of a dog or cat or other animal.

Yes, you do, KM--and I've loved those stories! Just like Chet and Bernie--experiencing the dog's POV is fascinating--Keep up the great work. I love it.

Omigosh! I can't believe I only found this site today and then stumbled across this delightful blog about dogs in books. I have a dog and a cat in my cozy series, inspired by who else? My dog and cat. The pet parent in the books can communicate with Dickens & Christie, and trust me, their voices are exactly what my pets are thinking.

When my calico looks at me as she stands by her dish, I know she is saying, "For goodness sake! You know good and well you have to center the dab of food in the middle of the bowl. What's your problem?" How I wish I really could "hear" my real-life animals. Don't we all?