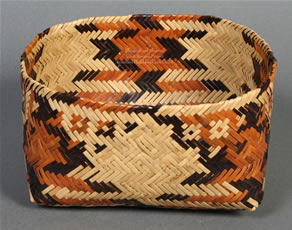 Yesterday began National Poetry Month, and I've been talking to my students in my Native lit class about the influence my grandmother had on me. The juxtaposition of those two concepts leads me to post one of my poems that tells a story, which means so much to me that I can never read it in public without tears.

I loved Grandmother’s baskets when I was small.

They had intricate patterns and figures

woven into them in brown, black,

She had different sizes and shapes,

used them for storage rather than display.

My favorite was in reds and yellows with a black border.

It looked to me as if woven of fire and grasses.

I would climb into cupboards, find one,

where everyone who came in could admire it.

“These aren’t the best ones,” she said

as she fingered baskets that looked beautiful to me.

“We used to make them from rivercane,

which makes a better basket and dyes the best,

but they rounded us up in concentration camps

and drove us on a death march to a new land

so now we use buckbrush and honeysuckle.”

Grandmother shrugged. “You make do.”

I asked her to teach me how to make a basket

like the one I loved with feathers of fire

along its steep sides. She shook her head.

but blood root will have to do.

They’ve dug all the yellow root

Got to have our dyestuffs first.

Got to forage for most of them.

It takes lots of trips, out and back,

to get enough to make good colors.”

I knew I could do that and said so.

She laughed. “You’ve got to know what to pick

or dig or gather. It’s like with my medicines.

I pointed out that I was learning from her

about the Cherokee medicine plants. She just shook her head.

“It’s not the same. I grow most of those.

Haven’t taken you out for the wild ones yet

because you’re too little still. Same for dye plants.”

I nagged at her for days, begging her to teach me

so I could have a basket of my own.

I had in mind that amazing fire-flickering basket.

My visit was over without her ever giving in.

I was used to Grandmother’s strength of will.

I knew I would have to try harder next time.

There was no next-time visit.

My mother had always hated her mother-in-law.

Now, she won the battle to keep us away.

Our relationship poured out in letters

until my mother destroyed them,

a letter that slipped past my mother’s scrutiny—

that she was making a basket

one last time for me.

I knew she was very ill,

I don’t know who got the beautiful baskets 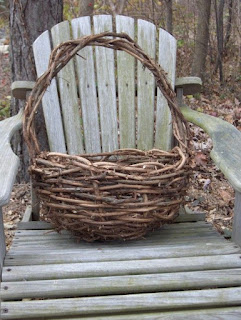 when Grandmother died, especially the one

that I loved when I was small.

Her sister and niece who cared for her

in her last illness, I suppose.

That’s fair. My parents had divorced by then,

with that family. But

arrived for me after her death.

My mother opened it first and laughed.

I stood waiting eagerly to snatch up

the last thing my grandmother would ever give me.

“Look at that,” Mother said with more laughter.

“That ugly old thing’s supposed to be a basket,

I think. She sure lost her knack for that

When I was small and visiting, I knew

in her hands. That’s probably why

she wouldn’t teach me to make baskets—

because she didn’t have the dexterity any longer

to make the kind she once had.

I still have that simple handled basket

The whole thing is dyed black.

There are no intricate patterns of flames

or anything else. It’s just solid black.

I can see her plodding out to gather

butternuts for the black dye

and to pull the honeysuckle vines,

stripping off the leaves.

I can see her gnarled hands

painstakingly weaving under and over,

no fancy twills or double-woven sides.

a shallow but sturdy gathering basket

All these years later

I have my own herb garden

where many of her medicine plants grow.

When I gather them to dry for teas and poultices,

I use that black vine basket.

I think it will last forever.

Linda Rodriguez's 12th book, The Fish That Got Away: The Sixth Guppy Anthology, is about to be published. She also edited Fishy Business: The Fifth Guppy Anthology, Woven Voices: 3 Generations of Puertorriqueña Poets Look at Their American Lives, and The World Is One Place: Native American Poets Visit the Middle East. Dark Sister: Poems was a finalist for the Oklahoma Book Award. Plotting the Character-Driven Novel, based on her popular workshop, was published in 2017.  Every Family Doubt, her fourth mystery featuring Cherokee detective, Skeet Bannion, and Revising the Character-Driven Novel will be published in 2021. Her three earlier Skeet novels—Every Hidden Fear, Every Broken Trust, Every Last Secret—and earlier books of poetry—Skin Hunger and Heart's Migration—have received critical recognition and awards, such as St. Martin's Press/Malice Domestic Best First Novel, International Latino Book Award, Latina Book Club Best Book of 2014, Midwest Voices & Visions, Elvira Cordero Cisneros Award, Thorpe Menn Award, and Ragdale and Macondo fellowships. Her short story, “The Good Neighbor,” published in Kansas City Noir, has been optioned for film.

I cried. What a beautiful tribute and a blessing that the basket was not intercepted.

People continue to interfere with the relationships between children and people who love them, whether out of jealousy or spite or a misguided sense of protection. How sad that you and your grandmother missed out on time you could have spent together.

Linda, I can only shake my head and mourn what could have been. The beauty of your grandmother's love despite all the challenges and separation is so powerful. I can see why it brings tears and why you cherish your basket.

Such a beautiful poem...and in so many ways a sad, but loving story.

Beautiful and heart-wrenching. How lovely that she made that one last basket she knew you would treasure.

Wonderful! I'll think of your grandmother every time I encounter pokeweed in my garden.

Kait, I hate to think what might have happened if she had sent me one of her beautiful baskets that my mother could have sold.

KM, yes. My mother spent the years after the divorce trying to pretend she had never deigned to marry "a no-good half-breed," as I heard her say many times. Fortunately, as an adult after my mother had died, I reconnected with my other family in Oklahoma.

Shari, thank you. My grandmother was the only stability and safety I knew as a small child. Ironically, from all I've heard, she was a neglectful mother. I think I was her second chance.

Debra, you are so right!

Margaret, poisonous, though she ate the young greens in the spring, but beautiful dye plant.

Linda, this is devastating and redemptive at the same time. Your reply to Shari's comment, that you were your grandmother's second chance, makes the story even sadder and better. She didn't give up hope of reaching you - she kept writing letters to you, and sent that last basket. She knew you were the right person, the best person. I'm glad you reconnected with your family in Oklahoma.

Molly, yes, I count it a real blessing that I was able to reconnect with my aunt and uncle before they both died. Fortunately, my cousins are still living in Oklahoma.