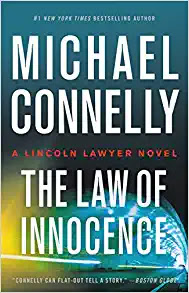 Michael Connelly’s sixth Lincoln Lawyer book differentiates between legal innocence and a verdict of not guilty. His main character, Mickey Haller, terms innocence as, “the big I, the rarest of all birds in the justice system.” (p.62) Later, Haller states, “Innocence is not a legal term. No one is ever found innocent in a court of law. The justice system can only deliver a verdict of guilty or not guilty…For every man not guilty of a crime, there is a man out there who is. And to prove true innocence, the guilty man must be found and exposed to the world.” (p.105)

The stakes could not be higher for Haller, who is on trial for murder with special circumstances—financial gain. The evidence is commonsense: the body of Sam Scales is found in the trunk of the Lincoln which serves as Haller’s mobile office, the bullet that killed Scales was embedded in Haller’s concrete garage floor, during a time Haller confirms he was home.

“Going to trial is always a gamble,” Haller says. “The prosecution is always the house in this game. It holds the bank and deals the cards. You take any win you can get.” (p.339). Haller adds, “Prosecutors could afford to be unimaginative, even stodgy. They trotted out their cases to the jury like furniture instructions from Ikea. Step by step with big illustrations, all the tools you needed included.” (p.336)

Jury selection for Haller’s murder trial begins in the Los Angles courthouse on February 19th, 2020, when the pandemic is imminent. Haller’s fear of conviction is amplified by the global crisis. “The world seemed to be on the edge of chaos. More than a thousand people were dead from a mystery virus in China. Almost a billion people were on lockdown there and American citizens had been evacuated. There were cruise ships out on the Pacific that were floating incubators of the virus, and no vaccine was on the horizon.” (p.259)

Haller handles his own defense with the help of his ex-wife and prosecutor, Maggie McPherson, deftly anticipating every move the prosecuting attorney will make. His half-brother, Harry Bosch, tracks down the source of the oily substance under the victim’s fingernails. Haller’s investigator, Cisco, digs deeper into the victim’s past. With the surreptitious assistance of an FBI agent, Mickey forces the prosecutor’s office into a corner. “It was me against the state, and while I would not be speaking to a jury, I wanted the judge to be reminded of the fact that I was one man standing alone against the power and might of the beast.” (p.231)

In a related context, “bleeding the beast” refers to scamming the government out of Federal subsidies for producing “green gold” or recycled oil. (p.192)

In contrast to Haller’s slick bravado in earlier books, when he feints and jabs the prosecution at every turn, he hits rock bottom: “I spent a restless night in my cell, listening to the random echoes of desperate men calling out in the dark. I heard steel doors bang and incongruous laughter from the deputies on the midnight shift. At times my body shook in physical reaction to the gravity of the moment. How could I sleep when I knew the next two days would determine the rest of my life?” (p.364)

According to lawyers who reviewed the book, Connelly gets everything about trial procedure and life in the Twin Towers Correctional Center correct, from the jailhouse breakfast of a baloney sandwich on white and a bruised apple, to every ploy in the prosecuting attorney’s playbook. The trial judge is a former defense attorney, wise to the strategies Haller and his defense team will employ. Everything is a battle: the evidence or lack thereof, witnesses allowed to testify or not, bail, jailhouse deputies releasing confidential phone recordings, and a game-changing October surprise.

With Haller’s courtroom savvy in tandem with the expertise of his two investigators and the support of his ex-wife and daughter, combined with a soupcon of luck, he conquers the beast.

Life lesson learned: I will never pull out of the garage without first checking the trunk of my car.

Writers: do you write courtroom scenes?

Readers: do you enjoy a courtroom procedural?

Excellent review. I’ve not yet read any of the Lincoln lawyer series. I may have to change that! I worked in the legal field - litigation paralegal – for almost 30 years. I would write courtroom scenes if it were germane to the action of the book. So far, I’ve escaped that. I do enjoy reading a well written, and accurate, courtroom scene. There are not many of those as most folks perception of what happens in court is grounded in television.

I've never written a courtroom scene. There are so many nuances to the legal system, I know I'd get it wrong. I haven't read any of this series either but plan to order this book NOW. Excellent review!

I'm a big fan of Michael Connelly's work. The Law of Innocence was one of the 5-star books I read last year.

I enjoy reading courtroom procedurals and even tried my hand at writing one, but I don't feel qualified to make it amazing! Maybe one day.

Thanks for sharing your review!

Kait, I ask my son about legal procedure from time to time, but he usually says my plot is unrealistic. It's complicated.

Annette, I particularly enjoyed this Lincoln lawyer book because Haller is scrambling to save his own hide instead of plea-bargaining for a client.

Jim, I agree with your assessment. This is a masterful piece of writing.

Jackie, thanks for stopping by WWK. Connelly must have done a huge amount of research to write this book.

I haven’t liked all of Connelly’s books recently, but his Lincoln Lawyer books are great, and often because of the court scenes. I don’t know a lot about writing court scenes, and I think a very detailed understanding of law would be necessary. I admire people who can do that.

Susan, I'm always up for an accurate courtroom scene. I suspect many of us are "armchair" criminal defense lawyers or prosecutors.

Great review... enticing. I haven't read this one yet, but now will.

Debra, enjoy! I particularly enjoyed how Connelly slipped in explanations of legal terms, as an aside or understood from context.

I don't gravitate to legal fiction, but I did love The Lincoln Lawyer. I'm going to pick this one up. Margaret, you're costing me a fortune in books! BTW I went to Fred's Shanty today for a hot dog. It's officially spring!

Spring in New London! I remember the gusty winds blowing off the Sound, but not much else during the rush to write papers and take finals.