Much has been written about method acting, a compendium of rehearsal and training techniques for actors that promote emotionally expressive performances. Based on the system developed by the Russian actor and director, Konstantin Stanislavski, three teachers at the Group Theatre in New York set the standard of its success. Lee Strasberg emphasized the psychological aspects, Stella Adler the sociological aspects, and Sanford Meisner the behavioral aspects. In each of these techniques, the actor was taught how to submerge his own ego, experiences, and motivations and take on those of the character he played.

Hundreds of America’s best actors were trained in this method, giving credence to its effectiveness in creating heightened performances of authentically-portrayed characters. Marlon Brando’s Stanley Kowalski in A Streetcar Named Desire is an example, but the list of method-trained actors includes distinguished names from Tom Hanks to Sally Field to Scarlett Johansson to Ryan Gosling.

What works for actors and directors of movies is also what works for me in the writing of novels. I’m often asked whether I’m an outliner or a pantser. The truth is, I’m neither. I’m somewhere on the spectrum of planners who approach their novels with the characters in mind. Once I have my primary characters firmly in mind—who they are, where they come from, where they are going, not just physically, but emotionally and spiritually—I’m ready to start writing. The characters compel me to submerge my own self and to slip into their skins. Once I can do that, the characters take over in my mind, and they are the ones who write the story.

As a method writer, I can (and do) write about characters who are super-rich or super-poor. I can write from the point of view of different genders, races, religions, sexual orientations, and occupations. I can take on the persona of a kick-boxing champion, a renowned artist, a nun, or a trophy wife, without ever having been any of these.

All that is required of me is solid research, a vivid imagination, and large doses of concentration and focus.

Method writing affects everything from word choice to style. If a character curses, espouses a controversial political belief, behaves impulsively, or even commits murder, I am not to blame (though this is a major stretch for me as a writer). Most of my characters have something of me in them, but usually, they are different from me in innumerable significant and insignificant ways. Yet, by the end of the manuscript I have lived inside of each of them long enough to understand exactly how they feel and why they do the things they do.

The intention is that this intimacy with the characters will transfer to the reader, leaving a memorable impression. Literature is at its best, for me, when that happens.

What literary characters can you think of that may have been created by method writing?

Award-winning author, Saralyn Richard was born with a pen in her hand and ink in her veins. A former educator, she loves connecting with readers. Her humor- and romance-tinged mysteries and children's book pull back the curtain on people in settings as diverse as elite country manor houses and disadvantaged urban high schools.

Visit Saralyn at http://saralynrichard.com, on her Amazon page at https://www.amazon.com/Saralyn-Richar..., or on Facebook at https://www.facebook.com/Palmcirclepres 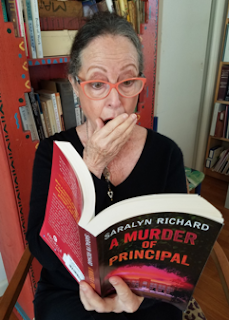 I love this blog. Actors are only inhabiting one character via method. Do you solely inhabit your protagonist or your entire cast of characters?

I think Britt Montero, Edna Buchanan’s intrepid reporter/sleuth character is a method creation—although I was a member of the Brickell Avenue Literary Society in the early 1990s. So was Edna Buchanan. When Edna’s first Britt book Contents Under Pressure was released, it was natural that Edna would be a speaker. Her appearance was the first after Hurricane Andrew tore into South Florida. Edna lived (and may still live) in a great old oolite rock house in Miami Beach. There had been talk of evacuating the Beach, but then Andrew fizzled. By the time he spooled up again, it was too late to evacuate and Miami Beach was projected to take a direct hit. Edna had cats, plural. She recounted sitting in her house listening to the horrific projections and admitted that she had no idea how to save herself or her cats. Causeways were closed. She was stuck. So, she asked herself a question. What would Britt Montero do? Britt, she decided would wait as long as she could in the safety of her house and then take her caged cats and herself into the attic to escape the projected storm surge. Miami Beach escaped the worst of Andrew’s wrath but Britt Montero had the plan.

I stumbled across this concept last year when I read Brandilyn Collins Getting into Character. I've found the ideas very helpful.

Great interview! My background is similar to yours--teacher, then mystery writer. Congrats and hope you have amazing sales.

Thanks for explaining something many of us "knew" without being able to express it coherently. Your blog is very helpful.

Loved this and had a flash of recognition - I have a character who calls herself a “method writer” and gets herself into some scrapes because if it. Wishing you all the best!

Thanks so much to E.B. Davis and Writers Who Kill for hosting me, and thanks for all the wonderful comments! Apparently I'm not the only method writer out there--and this is a great community to be part of.

You know, after taking a workshop on creating backstory for characters, it reminded a lot of the script analysis I would do for my acting classes. I really think that a lot of the skills learned in acting can easily transfer to novel writing, as well as playwriting and screenwriting. I personally think the best directors are those who understand the characters that they write and want their actors to portray. Same goes for authors.

I also once read that having actors act out your manuscript is a great way to get feedback on dialogue, pacing, etc. and of course...the given circumstances! :-)