I Left My Heart by Keenan Powell 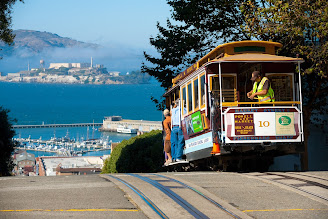 My settings are always a separate character. Perhaps it’s my Irish diasporic heritage, ever seeking a relationship to the land I inhabit. Perhaps it’s something more primitive than that. Alaska, about which I have written, I know. Other places I research. For setting as character, you can’t beat San Francisco.

I lived near, and left, San Francisco many years ago, but I’ve had the good fortune to stop for a few days now and then. Odd, I thought, when the pandemic struck that of all the places I lived, this was the first place I yearned to see again. So I started writing a new book set in The City by the Bay, thus seizing upon the excuse to hunt down old Herb Caen books.

Herb Caen was a columnist for the San Francisco Chronicle for six decades. A 1996 special Pulitzer Prize was awarded to him “for his extraordinary and continuing contribution as a voice and conscience of his city.” Lucky for us, he recorded the ever-evolving yet steadfastly quintessential character of The City and its inhabitants. When I was growing up, everyone read him. I mean everyone. Because the first thing that would happen when you went to work on Monday morning is someone would ask: did you see Herb Caen’s column? If you hadn’t read him, you weren’t in the know.

If you don’t read him for your love of The City, read him for his gorgeous descriptions. A quote from Don’t Call it Frisco (Doubleday & Co, 1953): 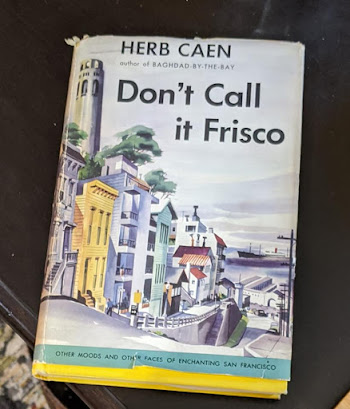 The tourist, looking at the city for the first time, shakes his head in a puzzled way and sighs: “This San Francisco – it sort of gets to you. There’s something about it. I don’t know quite what it is, but it’s something”…

And the San Franciscan smiles and nods, for he thinks he knows what it is…It’s the gay fluttering of the flags and pennants on the downtown minarets, outlined against a blue sky flecked with fast-rolling fog…It’s the never-cloying thrill of standing at the bow of a proud old ferryboat as it churns its white way in an arc across the Bay, then eases, like a practiced firehorse, into its slip under the Ferry Building’s ageless tower…It’s the pride, reborn again and again, that comes when you stand on a Marin mountaintop and gaze over the  water at your magic city, gleaming like an endless mosaic that covers each hill with castles and fills each valley with romantic lights and shadows…

I especially love the firehorse analogy.

How about you, Writers Who Kill? When you’re researching locale, what are your sources?

Beloved Readers: chime in on comments: Where did you leave your heart?

I also use places I have lived or visited frequently for settings of my novels. If I can, I revisit places to find out how they've changed to make sure my details are accurate. My current WIP takes place in Washington, DC (where I have visited many times) and St. Paul, MN (where some of our spread-out family resides).

My heart is in the Upper Peninsula of Michigan where two of the Seamus McCree novels are set and where I am sitting at my desk waiting for the sunrise to paint the opposite shores of our lake.

Magical writing,Keenan. Thank you for introducing me to a new (old?) writer.

Most of the places I use as settings are sites I am familiar with on an intimate level. Florida, the Greater Miami area, the Florida Keys, and the underwater world. A part of me will always belong to Florida, but my heart is in the woodlands of far northern Maine.

My parents had a San Francisco courtship in 1946 and shared stories with us growing up. After college, I lived on the Peninsula and explored SF.

San Francisco was my mother's favorite city. Years ago, she took me there for my 21st birthday and it remains one of my best vacation memories. I wish I'd known about this book when she was alive, she would have loved it.

I use settings with which I am familiar. Interestingly, though, I have never been tempted to use the Long Island suburban setting in which I spent my high school years.

I've visited San Francisco, and it is one of the places to which I'd like to return.

Jim Jackson: Definitely going back to the City by the Bay as soon as this is over.

Kait: What an interesting dynamic: underwater and woods. The same, kind of in a way.

Margaret: It was a great place to be if you could afford to park you car! Ha!

Judy: Sorry she didn't get to read Herb Caen.

KM: There is (was?) so much to do there. I usually go down for three days, stay downtown and ride the cable cars, and walk. Sometimes I rent a car and drive around. I've joined a San Francisco FB page and am discovering all kinds of things about The City I had not known before.

I’ve visited San Francisco on two separate occasions and enjoyed my visits both times. It is a fascinating city. But my heart is in central Pennsylvania in the Allegheny Mountains. I loosely disguised the setting of my series on my hometown there.

Writing memoir pieces, my settings are all over the place. But it's amazing how much I'd forgotten of the places I've lived. It can be a challenge to research what a place was like 40-60 years ago.

I've been to San Francisco once, and wanted to see a lot more of it. One of these days we'll get back there too.

And in the meantime, I'll have to read some Herb Caen.

Grace: I have not been to central Pennsylvania. I will have to check that out.

Jenni: I would think it'd be hard to research historical info for exotic locations on line. I found a ton on Gilded Age but I would, wouldn't I, since Americans are fascinated with themselves.