An Afternoon with Anne Lamott 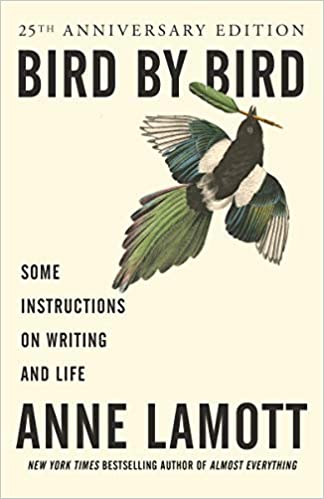 A friend contacted me the day before Anne Lamott’s on-line presentation, sponsored by Book Passage in Corte Madera, California, where Lamott has taught writing classes for thirty years. Would I like to join her? I paid the substantial admission fee and spent three fruitful hours listening to Lamott’s overview of Bird by Bird, a book I know well.

A video photographer filmed Lamott, who shared a couch with her two large dogs. She reviewed craft books she admires: Stephen King, On Writing; Walter Mosley, This Year You Write Your Novel; Abigail Thomas, Thinking About Memoir; and Brenda Ueland, If You Want to Write. Lamott supplemented the discussion with a few truisms: no one, including your family, cares if you’re writing; stop making excuses about not having time to write; and a favorite Flannery O’Connor quote: “Anybody who has survived his childhood has enough information about life to last him the rest of his days.” (Mystery and Manners: Occasional Prose, 1970).

Lamott used an example from one of her students, whose mother had punished him by holding his hands over the stove flames until they burned. She urged her student to create characters and a storyline using the scenario, mining his emotional memories about the incident to create a new, fictionalized truth. In addition, she urged writers to create likeable (not necessarily reliable) narrators and help the reader situate the action in time and space.

In addition to the “bird by bird” example she discusses in her writer’s manual, Lamott mentioned Doctorow’s comparison of writing to driving at night, only able to see what’s ahead in the headlights. Lamott described her “lily pad” method of plotting: make big circles on a piece of over-sized graph paper, and fill the circles with what you know, from the beginning to the end, each section of the book a different lily pad. Lamott writes in pencil so she can easily revise and update the circles. Otherwise, she usually doesn’t outline.

in which Sittenfeld describes the process of making a commitment to write, deciding what to write, and settling down to write, with no distractions or excuses.

Lamott detailed her process of writing a novel in three drafts: the “spill your guts” first draft no one will see; the second, “adult” draft; and the third, “tooth by tooth” dental draft, when she examines every word, sentence, and paragraph. For her second novel, she put the entire manuscript on the floor and rearranged the order of scenes and chapters, adding placeholder sheets for new content, and then wrote a plot treatment, in a last desperate move to have it accepted for publication. She succeeded.

She reviewed Harry Guinness’s editing process, which he discussed in a recent NYT article:

Lamott starts her daily writing session with a prayer, “Help me get out of the way so I can write.” She has a SAVE file for prose she deletes but can’t bear to part with, and when not at her desk, always has a folded file card and pen in her pocket to record ideas and observations. She relishes a memorable quote she salvaged from her job at a beer joint and refused to allow a copy editor to change:

She adds: start in the story, don’t force humor, and use sensory details. Study old movies and learn how to portray the passage of time (flipping calendar pages, or clouds scudding across the sky).

Lamott listed her favorite novels, which provide inspiration and serve as models for writers. Colwin’s and Hanff’s books are both on my top ten list.

Happy All the Time, Laurie Colwin

I attended Anne Lamott’s Cincinnati event in 2018 during her Almost Everything book tour. Her recent Book Passage workshop video was an eloquent distillation of her thirty years of teaching writing to children and adults. In addition to an overview of Bird by Bird, she discussed how she manages her writing process, with many suggestions for new and experienced writers.

Writers, have you read Bird by Bird or another book which has helped you with the writing process?

I love Bird By Bird. This post makes me think it's time to pull it down from my bookshelf again.

Thanks for the summary. I'm like Annette in thinking it might be time to give Bird by Bird a re-read.

Bird by Bird is one of the few writing books I don't have on my shelf. I need to remedy that!

My go to writing book is Stephen King's On Writing. Not for the instruction, the book is more story than how to, but for the energy. I find it always gets me out of the writing doldrums and to the keyboard.

What a terrific event! Thanks for sharing all the great information, Margaret.

This sounds like a wonderful event. Her book was one I read when I decided to write mysteries.

I love Bird by Bird. When I'm overwhelmed, I often think: "one inch picture frame."

I, too, have Bird by Bird on my bookshelf. Such a sound premise for us writers. Thanks for sharing your Anne Lamott experience.

Thank you, Margaret, for the terrific summary. I read "Bird by Bird" years ago and have a copy on tape. I'll have to dig it out again.

Thanks all! The consensus is that we've all read and absorbed the lessons of Bird by Bird. Maybe a refresher read, focusing on what we've accomplished and learned, would be beneficial.

I keep Bird by Bird on the cookbook shelf in the kitchen, so I can flip through it for consolation after a rejection.

Encouraging and informative! Thanks for sharing this with us.

Such amazing info! I "lily pad" too, but I've heard it called "webbing" or "cluster graphing." I like lily pad so much better.
thank you for sharing all this!

Kathleen and Shari, thanks for commenting. I think of Lamott as a dragonfly, flitting from lily pad to lily pad.

Bird by Bird was my first book on writing! Very close to my heart.