Five Things You Might Not Know About Agatha Christie, The Queen of Crime 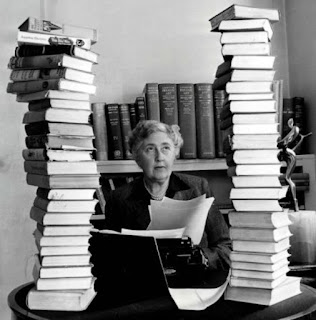 Tomorrow – September 15 -  is the 130th anniversary of Agatha Christie’s birth. Please join me in raising a cup of tea in an early birthday toast to Dame Agatha, one of the most influential and successful novelists of all time. Her genre, the traditional mystery, has remained popular with readers since she published her first novel, The Mysterious Affair at Styles, in 1920.

Most are familiar with the outline of her life. The mega-selling (over two billion copies) author’s work is rediscovered by every generation and celebrated with a splashy, star-studded movie (the latest, Kenneth Branagh’s Death on the Nile, is slated for October). Born to a middle class family in Torquay, England, she was homeschooled and taught herself to read at age five. She had an ill-fated whirlwind marriage to Royal Flying Corps aviator Archie Christie and her disappearance when she discovered his affair caused a sensation. Her work in pharmacies during the war gave her a wonderfully deep and useful knowledge of poisons. Her happy second marriage to archaeologist Max Mallowan, and their travels, inspired some of her most popular books.

Her work continues to delight, inspire, and yes, confound 44 years after her death – from natural causes - in 1976 at age 85. In honor of the day, I thought I’d share a few lesser known facts about the Queen of Crime. 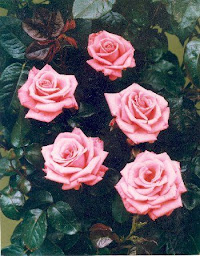 She is the only female dramatist to have had three plays – Spider’s Web, Witness for the Prosecution, and The Mousetrap - running simultaneously in London’s West End.

She owned many dogs and her favorite breed was the terrier. Her first dog was named George Washington. Her favorite was a short-haired terrier called Peter that she wrote into Dumb Witness as “Bob.” I have no idea what she's doing with the dog in the photo. 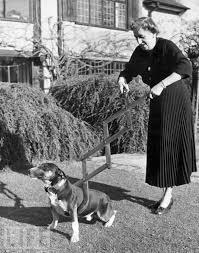 In 1922, her first husband Archie was asked to tour several areas of the British Empire to promote the British Empire Exhibition. He and Agatha stopped in Hawaii and the couple learned to surf, possibly becoming two of the first Europeans to master the sport.

Her only child, Rosalind, fiercely private like her mother, had one son, Mathew Prichard. Mathew received the sole rights to The Mousetrap for his ninth birthday.

There’s a misspelling on her gravestone. See if you can spot it.

Shari Randall is the author of the Lobster Shack Mystery series.

I did not know any of your fun facts. Our family log cabin, which was outside Apsley, Ontario, had bookshelves over many of the windows. On them were primarily mysteries, including many Agatha Christies. Can't say I have a favorite, though. It's been a long time since I read any.

Frequently I can figure out who the villain is in a mystery, except for those written by Agatha Christie. She confounds me with each of her books. But writers can learn a lot from how she hides clues in clear daylight. I love how she once had Miss Marple solve a crime and save her life from observing her jar of face cream was turned the wrong way.

Love it! Huge Christie fan, have read all of her books. Reread Murder on the Orient Express recently -- still holds up today, great plot. Curtain is probably my fave. I wrote a post about her alter ego, Ariadne Oliver: https://thestilettogang.blogspot.com/2018/10/agatha-christies-ariadne-oliver.html (actually I see you commented on that one). Very cool gravesite tour. Thanks for sharing.

Grace, that's one of the things I love about her, too. She plants those clues RIGHT IN FRONT OF US and somehow we miss them. What a talent! I remember watching the movie Witness for the Prosecution and at the end I realized that she'd given a huge clue right in the first few minutes. She's a great teacher for us mystery writers.

Thanks, Margaret. I love Bertram's, too!

Hi Judy, I remember that column! I've grown to love Ariadne over the years.

I, too, love her ability to hide clues with steath. She knew so much about human nature.

What a great list and do any dog people reading the blog have any idea what that contraption is? The dog doesn't seem bothered by it so I guess it has a benign purpose!

I haven't read any of her books in a long time. That's an oversight that needs to be remedied. Think I'll start with Miss Marple. She was my favorite.

Susan, she is the queen of the red herring!

Kait, I'm hoping a dog lover will know what on earth is going on there. It's so totally bizarre!

My favorites are anything Miss Marple.

We were somewhat limited in our access to books, especially adult fiction, when I was a kid. One of my aunts visited every Wednesday afternoon to look after us while my mother took her car and ran errands (or whatever.) She read Agatha Christie, and she'd often forget her current book, leaving it at our house. I quickly learned that when that happened, if I could glom onto the book before my mother found it, I could get it read before she came back the next week and return it.

I would love to see a photo of Dame Agatha surfing. Thanks for the fun post!

I have so many fond memories of reading Agatha Christie books. Thanks for the fun facts! (I didn't know about the surfing.)