An Interview with Author Ellen Byron by E. B. Davis

“But I’ve got a bread pudding in the oven. I’m hoping the scent will finds its way outdoors and make those officers hungry. Then I’d get to tell them, ‘Too bad, you’re not getting any.’”
Ellen Byron, Murder in The Bayou Boneyard, Kindle Loc. 2115

Maggie Crozat, proprietor of a historic Cajun Country B&B, prefers to let the good times roll. But hard times rock her hostelry when a new cell phone app makes it easy for locals to rent their spare rooms to tourists. With October--and Halloween--approaching, she conjures up a witch-crafty marketing scheme to draw visitors to Pelican, Louisiana.

Five local plantation B&Bs host "Pelican's Spooky Past" packages, featuring regional crafts, unique menus, and a pet costume parade. Topping it off, the derelict Dupois cemetery is the suitably sepulchral setting for the spine-chilling play Resurrection of a Spirit. But all the witchcraft has inevitably conjured something: her B&B guests are being terrified out of town by sightings of the legendary rougarou, a cross between a werewolf and vampire.

When, in the Dupois cemetery, someone costumed as a rougarou stumbles onstage during the play--and promptly gives up the ghost, the rougarou mask having been poisoned with strychnine, Maggie is on the case. But as more murders stack up, Maggie fears that Pelican's spooky past has nothing on its bloodcurdling present.
Amazon.com Ellen Byron’s Cajun Country mysteries are always fun to read. Kick back with a shot or two of whiskey and eat a Halloween sugar cookie in the Crozat Planation kitchen. The Cajun culture and cuisine bring to mind a myriad of questions, but also of comforts. Murder In the Bayou Boneyard is the sixth book in the series and was released yesterday.

Maggie Crozat, Ellen’s artist main character, has brought trouble to her family and the B&B with her marketing plan to bring in tourists to their town of Pelican, LA during October. The promotion ends at Halloween, a holiday Maggie has hated since childhood.

With the opening of the B&B’s new spa, Maggie hired a new masseuse, a distant Canadian relation. Trouble soon follows as does Maggie’s vision of the spa. If not for her friend Mo, the spa would close before it barely began. When a murder occurs on the B&B grounds, Maggie feels responsible. But when a tattletale parrot spouts off to the police, Maggie finds herself on the suspect list.

How did Father Prit come to Pelican? Is there an Indian contingent in Pelican? There is not. Father Prit was totally inspired by the priest who conducted my late cousin’s funeral. He had a very thick accent, which drove my relatives nuts. I felt bad for him, so I made sure the citizens of Pelican warmly embraced and appreciated him. 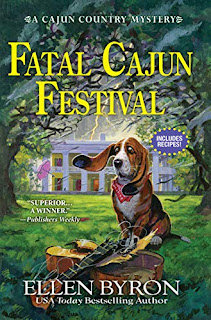 Rougarou- a legendary creature who is the Cajun equivalent of a werewolf.

Crawtatoes- an appetizer I invented!

Sazerac- a popular New Orleans’ take on a whisky or cognac cocktail. In 2008, it was declared the official cocktail of New Orleans by the Louisiana legislature.

Café brulot- a coffee drink flavored with a spiral of orange zest and spiked with whiskey.

Doberge cake- a traditional New Orleans cake where generally thin layers of cake (usually six) alternate with a pudding filling and then the cake is covered with a buttercream or ganache frosting. There are many variations on this.

Pimm’s Cups- my favorite Louisiana cocktail! There are many different recipes for it, but all include Pimm’s Cup #1, a gin-based spirit.

Does Pelican’s lack of zoning laws allow rental operators like Gavin Grody to operate, which precipitated the need to the month-long B&B promotion Maggie invented? I didn’t write this into the book, but I would say most likely, yes. I think the AirBnB and VRBO movements caught a lot of local governments by surprise and left them scrambling to create laws that protect local housing. I know it’s been a real problem in New Orleans. 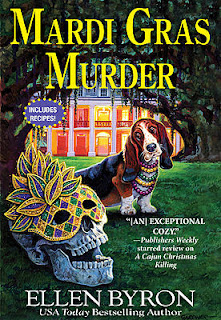 Were the Canadians who settled in Louisiana from Acadia? Is that how the Cajun got their name? Did some find the area unsatisfactory and went back to Canada? What was the era? The British expulsion of Acadians from Canada took place in the 1760s. Many chose to go to Louisiana, which was under Spanish rule at the time, because of the good relationship between the French and Spanish, and their shared Catholic faith. (There were already many French in New Orleans, too.) I fictionalized the return of some to Canada, which would have occurred much later. But I’m sure some Acadians preferred their homeland to the Louisiana swamps. And yes – if you say “Acadian” fast, it eventually becomes the word “Cajun!”

Maggie, a first-time bride, isn’t as into planning the wedding as Grandmere. Why? Maggie doesn’t love being the center of attention. She’s always been a bit of a rebel against her storied local genealogy as a descendant of one of the town’s founding families, so she’s not comfortable with the idea of a big, grandiose wedding. Grandmere, on the other hand, married her first husband, Maggie’s grandfather, on a train platform before he shipped out to the Korean War, so she never got a big wedding. Now, at eighty-three, she’s making up for that with her second wedding, and with no apologies to anyone!

Susannah Crozat MacDowell is a distant relation from Canada. What possessed Maggie to hire her as a masseuse?  Maggie is an only child with few relatives, and none nearby. She longs for an extended family and thought hiring Susannah would be a great way of bringing more family members into the fold while helping one of them – Susannah - out financially.

I loved Mo Heedles. Please tell our readers about her. I love Mo too! She’s a warm, entertaining, successful Black businesswoman who’s taken a career that began with multi-tier marketing of a skincare line and run with it. In the future, she may even franchise her brand. BTW, the name Mo Heedles is an homage to real-life reader Maureen Heedles, who cast the winning bid at a Malice auction to have a character named after her. Little did she know Mo Heedles would become a beloved recurring character!

Walter Breem, the Dupois caretaker, isn’t what he seems. Why does Maggie like him? She senses the pain that underlies his gruff, off-putting exterior and feels great empathy for him without even knowing his personal story. 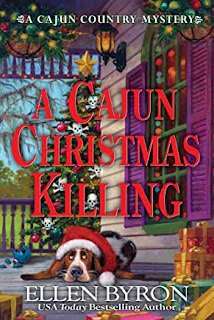 Johnnie, Susannah’s stepson, is in drug recovery. Why does he team up with stage manager Emma Fine, who assists on the promotional play being held at the Dupois cemetery every weekend? Emma also struggled with addiction, so they’re kindred spirits. They’re also both lost souls on a level, which offers them another bond.

Did you want to play a joke on author Julie Mulhern by naming a character after her? Ha! Julie used my name in a book, so of course I had to reciprocate. (At least I think she did? I read so much it’s hard to keep everything straight. Oh, well. I adore Julie’s writing and general personage, so it was a pleasure to give her a shout-out, even if it takes readers who know her out of the book for a moment.)

After Susannah dies, Maggie claims that Susannah wasn’t the prankster kind. And yet, Maggie didn’t know Suzannah for very long and learns that Susannah gave her phone number to telemarketers, inflicting spam calls on Maggie. That sounds like a nasty prank to me. What prompted Maggie to come to that conclusion? The telemarketer move wasn’t a prank, it was revenge. There’s a difference. Maggie immediately gets that Susannah doesn’t have any sense of humor, even the distorted kind it take to pull pranks on people. (I am not a fan of them.)

Since Susannah died in the cemetery, part of which is located in a different jurisdiction, the Ville Blanc police department is involved. Why do they suspect Maggie? Maggie had a falling-out with Susannah that makes her a prime suspect in the woman’s mysterious death. Late, Lamented Pets, part of the B&B promotion, enables guests to bring their pets, who are mostly costumed in Halloween finery. Who is Lovie? Did Lovie have a costume? How did Lovie incriminate Maggie? Lovie is a parrot who does not have a costume but does have a big mouth and blabbed a piece of conversation she overheard that casts Maggie in a bad light to a Ville Blanc detective. His pet parent DruCilla is an homage to dear pal and beloved mystery blogger Dru Ann Love.
Is a parrot’s testimony admissible in court? Parrots cannot be put on the stand but what they’ve been heard to say can be allowed as evidence in some cases.

Why does Maggie think Halloween brings out the paranoia in people? This is inspired by the fact that I personally always found Halloween creepy as a kid. I felt like it gave bullies permission to give in to their worst instincts, like harassing kids and throwing eggs or TPing houses. Even as a kid, I noticed a general tension in the air around Halloween time. I have memories of trick or treating in the dark and being absolutely terrified.

Do funeral homes load the casket feet first so the mourners won’t be cursed by the spirit of the dead seeing them? Is this just an old Cajun custom? I don’t know if that’s the case now, but it was definitely true of Cajun and Creole families. I think many other 19th century cultures believed this as well.

Helene Brevelle, a voodoo priestess, wants Maggie to have protection from evil. What does she give Maggie? Does Maggie believe in voodoo? Helene gives Maggie a gris gris bag, which is a small bag filled with things specific to what the wearer needs help with – in this case, protection. Helene also gives Maggie protection oil. I think Maggie is on the fence about whether or not she believes in voodoo but ascribes to the philosophy, “better safe than sorry.” 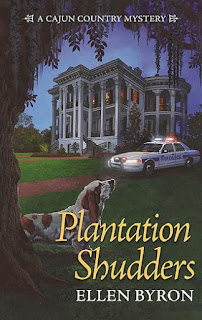 Maggie gets so upset and stressed out, she starts talking to a squirrel. Why doesn’t she talk to her dogs, Gopher and Jolie? Because I didn’t think of it at the time and now I wish I had!

The Dupois plantation was based on a real place. What’s it like now? Dupois was inspired by “Le Petite Versailles,” the most famous Louisiana plantation home and gardens in the 19th century. Nothing is left of it today except garden ruins, overgrown, privately owned, and closed to the public. Mary Ann Sternberg, author of several of my favorite books about the Louisiana River Road, is one of the few people allowed to access the ruins in recent years and write about them. The fascinating chapter detailing her exploration can be found in her book, River Road Rambler. I would love to be allowed to explore what’s left of the grounds myself someday.

What’s next for Maggie and her family? I don’t want to give too much away but I’ll tell you this - A celebrity chef comes to Pelican to open an outpost of his famed Cajun chain of restaurants. Skullduggery – and murder! – ensue. 😉 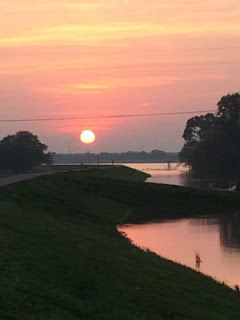