Mr. Vonnegut and Me by Susan Van Kirk

Long before I wrote mysteries, I was a public schoolteacher with a thirty-four-year career teaching English in the small town of Monmouth, Illinois. Sounds like a quiet, non-newsworthy life, doesn’t it? I can assure you it was anything but, and those years produced unimaginable stories that I published in my very first book in 2010. It’s called The Education of a Teacher (Including Pointed Looks and Dirty Books.) You may remember the pointed looks from your own high school years, but the dirty books refers to the longest chapter in my collection of stories, a saga of book banning.

Banned Books Week occurs this year from September 27 to October 3. It is an annual event celebrated by communities across America, and it was launched in the 1980s. Schools and libraries plan annual celebrations that highlight past and current attempts to censor books.

As an English teacher, I often taught challenged or banned books in my classes. Some of my favorites were The Great Gatsby, The Grapes of Wrath, To Kill a Mockingbird, Of Mice and Men, Slaughterhouse-Five, and Native Son. Other banned books were on my book report list highlighting “you should read this before you go to college” books. This list included Kurt Vonnegut’s novel, Breakfast of Champions. I won’t ever forget his novel because it put me in the middle of a textbook example of a parental book challenge, a situation that forced me to consider what I believed, and made me wonder if the school district and the town would be on my side.

This textbook challenge happened twenty-five years ago this November, but I remembered it as if it were yesterday. 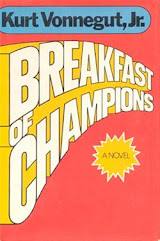 The whole brouhaha occurred in our small high school of 500 students. It lasted approximately six weeks, and the flames were fueled by the local media. The parents of a high school junior in my American Literature class wanted Breakfast of Champions taken out of the library because it was “pornography and trash,” not suitable for children. They also wanted to form a committee of parents to go into all the district libraries and throw out books that they deemed “trash.” Their student had chosen the Vonnegut book from a list of suggested books to read for individual book reports. By the time she decided she didn’t understand Vonnegut’s book, the report was almost due. So I suggested she read some secondary sources about the book’s themes.

However, before she could do so, her parents discovered the book, decided it was inappropriate, and determined that they wanted to protect all the children of the district from reading it. They enlisted the local media, giving the newspapers out-of-context information about the book and why they considered it to be pornographic. The parents also contacted the principal, superintendent, and school board. Guess whom they didn’t contact. Their viewpoint was that they were taxpaying citizens who should be able to decide what books were healthy for the school libraries. They were protecting their child as well as those of other families in the district.

Besides the local newspapers, they called on the help of a television station in a metropolitan area an hour north of us. The media coverage put a great deal of pressure on the school district. It is interesting to note that the television station did not contact me, nor did two of the three newspapers covering the story locally.

My own point of view was that I had to provide materials that were suitable and recommended for all students in the high school. So if a family objected to material for their own student, I suggested alternative books that would convey the spirit of the assignment. But in the Vonnegut incident, the parents went right past me. It was my own belief that the Vonnegut book should be available for students who wanted to read it, and one set of parents should not prevent that. Several of my past students had read Breakfast of Champions and loved it.

Halfway through the storm, one of the college students who worked at the local newspaper decided to call Kurt Vonnegut and get his take on the issue, a decision that resulted in a piece of satire in the local newspaper. Their conversation was hilarious, and Vonnegut was shocked that they were not going after Slaughterhouse-5. This emboldened me to write a letter to Kurt Vonnegut, and I added some of the more inflammatory newspaper clippings.

The end of the “tempest in a teapot” came when the school board voted neither to ban the book from the library nor to allow parents to go into the school libraries and take out materials. Besides their support, throughout those six weeks I had the backing of both the superintendent and principal because they trusted my judgment. That was a wonderful gift.

However, a second gift came in my school mailbox. Kurt Vonnegut had received my letter and clippings, and he wrote me the loveliest and funniest letter in return, commenting on book censorship. In part, he stated, “You and your students are lucky to be in Norman Rockwell’s America, where Jeffersonian debates are possible and usually entertaining. One community banned Slaughterhouse-5, and a reporter called me to find out what I had to say about it, and I said that the head of the School Committee was a piss-ant, and he dropped dead the next day.” *

The entire story of the book challenge, including excerpts from the media, Vonnegut’s entire letter, and details about the whole book incident can be found in my book, The Education of a Teacher (Including Dirty Books and Pointed Looks.) In addition, on October 31, 2012, Dan Wakefield’s book, Kurt Vonnegut: Letters, was published, and guess whose letter appears in his book?

*quotation used with permission of the author.

I love Kurt Vonnegut! This only reinforces my admiration!

An interesting personal take on the narrow-mindedness of some people and their insistence to impose their views on the rest of us.

I read all of Kurt Vonnegut’s novels and met his brother, a physics prof at SUNY Albany where I obtained my BS degree. Both of them smart guys with interesting views of humanity and the universe.

Marvelous! I went to college with a Barnstable, Mass resident who knew "Mr. Vonnegut" as a neighbor. She was amazed that he was a much-admired author.

Annette, at the time I needed a legal release from Vonnegut, he was out on his last book tour. His agent told me to let him know if I didn't receive the release back because Vonnegut was very busy on this tour. The very next day the legal release, signed, came back in the mail. That's how thoughtful he was. He hated censorship, as I'm sure people who love books do.

And the irony, Jim, is that even though Breakfast of Champions is what people would call "crude" at times, it also had wonderfully positive themes about the human race and how we should treat each other.

That is a most interesting comment, Margaret. I imagine a lot of people would be surprised that this man was famous. He was certainly opinionated, but he had the common touch, especially when he wrote a letter to a totally unknown schoolteacher in a small town.

Vonnegut books were my companions in the 1960s and 1970s. He was a wondrous writer and from all accounts an excellent human being. This post only reinforces my impressions of him. How cool that he wrote you. That's a class act of a generous man.

So true, Kait. After his death, they began a Vonnegut museum in Indianapolis and were looking for letters he had written. When I told them I had one, I immediately heard from the estate saying I needed their permission to use this letter in my book. But I had his written release, and it was a wonderful gift. I've always treasured the letter, and it is hanging on the wall in my living room. It was a very difficult time for me, but I came out of it stronger.

What a horrible experience, and yet, due to Vonnegut--the best of experiences! I loved reading Vonnegut in high school. I don't think my parents or any of the school staff were even aware of him. You were a progressive teacher, Susan. Congratulations!

Thanks, Marilyn and Elaine. I was lucky that the school board backed me. We had to find them copies of the book and it was out of print. So college professors dug through their shelves and we found enough. Needless to say, every teenager in town wanted to get their hands on this book. Great way to get kids to read.

Excellent post, Susan. One good way to get people to read a book—ban it.