An Interview With Ellen Byron, Writing as Maria DiRico

Agatha Award and Lefty Award winner Ellen Byron recently released the first book in her new Catering Hall Mystery Series, writing under the name of Maria DiRico. Ellen is well known for her Cajun Country Mystery Series and also for being the scriptwriter on television series such as “Wings.” It was a pleasure talking to Ellen/Maria about both her series and her other works.

After her philandering husband’s boat went down, newly single Mia Carina went back to Astoria, the bustling Queens neighborhood of her youth. Living with her nonna and her oversized cat, Doorstop, she’s got a whole new life—including some amateur sleuthing . . .

Mia is starting work at Belle View, her father’s catering hall, a popular spot for weddings, office parties, and more—despite the planes that occasionally roar overhead on their way to LaGuardia and rattle the crystal chandelier. Soon she’s planning a bachelor party for a less-than-gentlemanly groom. But it goes awry when the gigantic cake is wheeled in and a deadly surprise is revealed . . .

Since some of her family’s associates are on the shady side, the NYPD wastes no time in casting suspicion on Mia’s father. Now, Mia’s going to have to use all her street smarts to keep him out of Rikers Island . . .
www.amazon.com

Welcome, Ellen/Maria, to Writers Who Kill.

As an award-winning author under your own name, why did you use the pen name Maria DiRico for your new series?

Kensington wanted me to use a pen name for their own publishing reasons. I chose “Maria DiRico” because it’s my late nonna’s maiden name. My mother was born in Italy, and the series is in many ways a tribute to the fond memories I have of times spent with the Italian side of my family.

In the first book of the Catering Hall Mystery Series, Here Comes the Body, there is a strong theme of reinventing yourself and second chances—for Mia Carina, who returns to her home in Queens from Florida under a cloud of scandal, and for her father and brother, who haven’t always been law-abiding citizens. Did you have that in mind when you wrote this book?

I think it was more of setting those as goals for my characters than thinking of it as themes. Sometimes I do set out to highlight a theme, but I get so caught up in the lives of my characters that theme falls into the background.

You included several subplots in Here Comes the Body, including Mia searching for her lost bird, a missing husband, elderly people in a community being taken advantage of, and neighborhood change. What value do you think subplots bring to a book? 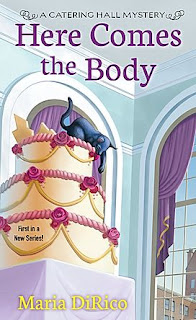 Subplots add a richness to plots and show layers to characters. We love Mia for her drive to find her little lost parrot. It shows her warmth and vulnerability in the face of trying to be so strong in challenging circumstances. And speaking of themes, there was definitely a theme to the subplot of Felicity Stewart Forbes, the rapacious real estate agent manipulating local senior citizens. I wanted to shine a light on how gentrification can up-end a community. It’s not all bad—I don’t want to give anything away—but I fear for how it often decimates affordable working-class neighborhoods.

At the very beginning, we know that Mia’s husband has disappeared, presumed drowned. How is she able to go on with her life and possibly form other relationships, with his death being uncertain?

It’s hard! His open-ended disappearance leaves her in a relationship limbo – she’s not divorced, she’s not officially a widow. What is she? But she also uses this dilemma as an excuse not to jump into a new relationship. Her disastrous marriage has left her a bit of a commitment-phobe because she doesn’t trust her own choices.

At one point, Mia, feeling overwhelmed and depressed, goes out for an evening of music and dancing, which bolsters her spirits. Does music lift your spirits? Do you have a favorite kind of music? 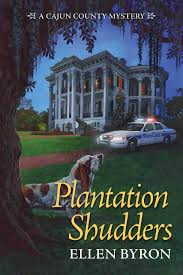 I love a ton of different music genres, from pop (I say I have the taste of a tweenager) to Cajun to Bollywood. But I am and always will be, a proud Disco Queen. My favorite band of all time is KC and the Sunshine Band. When I hear those opening notes of “Get Down Tonight” – talk about lifting your spirits! I think it’s the best pop song ever written and you will never convince me otherwise.

Queens is like another character in your book. Placing your book anywhere else in the country wouldn’t have worked as well. Did you grow up in Queens? If so, when you go back to visit, do you find it changed?

I lived in the Little Neck section of Queens until I was ten when we moved to the suburb of Scarsdale for their excellent school system. But most of my Italian family lived in Astoria. Nonna lived there until the day she died. Eventually, relatives decamped for Long Island and New Jersey, but my childhood was centered around Astoria. Cousins by marriage ran two catering halls, the Astoria Manor and Grand Bay Marina, where Jer and I had our East Coast reception. The memories of all the family events that took place at these locales—plus the local Knights of Columbus, of course—inspired the series.

Also, my late grandfather, who I never got to meet, helped found an organization called the Orsogna Mutual Aid Society, which exists to this day. Orsogna is the little village my family came from in Italy, and so many pisanes emigrated from the town that it inspired Orsogna MAS to offer support and camaraderie with the old hometown.

You included several phrases in Italian throughout the book, which really adds to the flavor. Do you speak Italian?

A little, but not as much as I wish I did. My mother spoke Italian when she didn’t want us to know what she was saying, LOL. I finally studied it in college and became semi-proficient. But my family spoke with a dialect and accent, so even when my Italian was at its best, I couldn’t understand most of them. I did speak enough to get around Italy on a couple of trips, but I’ve been living in California for thirty years now and lost any opportunity to practice the language. It was much easier in New York.

How much does Mia’s world resemble your earlier life? Have you had any family members or friends say they saw themselves in your characters?

Mia lives where my nonna and zia and zio lived with their kids. She works at Grand Bay Marina, which Cousin Pauly ran. She shops at La Guli Pastry Shop, a real store in Astoria. So… a lot of it. But my family was not mobbed-up, although some cousins definitely had connections. When you’re running catering halls in Queens, it’s almost impossible not to. At least it was back when I was growing up. No family members recognize themselves, although my mother was plenty nervous that they would.

With a career writing TV scripts (e.g., Wings), what made you switch to writing novels, especially mysteries?

Lack of work writing TV scripts. Half kidding. My TV career hit a dry patch, which also coincided with a bit of script-writing burnout on my part. I have to write—I can’t not write—so I decided to try writing what I love to read: mysteries.

TV and movie scripts are pretty lean. How was the transition to novel writing, which requires more detail? Did your previous experience writing scripts help?

It absolutely helps me plot out a story. Absolutely. I began my writing career as a playwright, and that’s what helps me add detail and color in terms of a book’s prose. That’s why, given my slight case of script burnout, I gravitated toward novel writing versus writing a TV or film spec script. It allowed me to wax more poetic in terms of mood and setting than I can in a script.

The Catering Hall Mystery Series is quite different from your Cajun Country Mystery Series, under the name Ellen Byron. Please tell us about that series.

I discovered Cajun Country when I was a student at Tulane University and fell madly in love with it. The fact there’s a region in this country with its own food, music, and even language absolutely fascinates me. I’ve always been an architecture buff thanks to my mom, who organized family vacations around visiting historical sites. In my Cajun Country series, a young artist returns home to Pelican, Louisiana—town motto, “Yes, We Peli-Can!”—to help her family run the family plantation as a B and B. And of course, a variety of murders charted through the series make this very difficult.

Is it a coincidence that the main characters from both series, Mia Carina and Maggie Crozat, have the same initials? 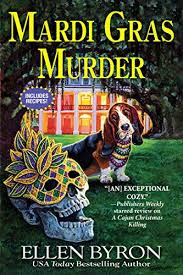 No, it was total stupidity on my part. I didn’t even realize it until it was too late. And now I need to do a search through every book to make sure I’m using the right name. (Rolling eyes and slapping forehead.)

So what’s next for Mia and Maggie?

I’m super excited about both upcoming books. Murder in the Bayou Boneyard, the sixth Cajun Country Mystery, launches September 8th. It revolves around Halloween, and you can imagine how much fun I had writing about Halloween in Cajun Country, especially since Louisiana proudly claims to be the most haunted state in America. (Spoiler alert: no ghosts in the story, but there is a rougarou, the Cajun equivalent of a werewolf.)

And in Long Island Iced Tina, the next Catering Hall Mystery (March 2021), a stolen painting that mysteriously appears twenty years later sets off a wild chain of events, including murder. And there’s a fun subplot for Lizabetta, Mia’s nonna. The late husband of a close friend appears to his widow in a dream telling her that he was buried without shoes and he needs some. So to help her friend, Lizabetta goes from one funeral to another trying to sneak a pair of shoes into an open casket. This storyline was inspired by a real conversation between my nonna and mother that I was privy to. My mother has no memory of this, but I’ve never forgotten it!

Waving at my Agatha nom buddy from isolation in Pennsylvania! Hi, Ellen! Welcome to Writers Who Kill!

OMG. KC and the Sunshine Band! We clearly share the same musical soul. We'll have to get together (someday!!) and break out our disco moves! Get down tonight!!!

Love you, my friend.

Congrats on a new series! Your book is sitting on the kitchen counter.

Baby, baby let's get together... greetings from another Disco Queen!

Can't wait to dive into the world of your new series - it's on my Kindle - it makes me feel at home already. i migliori auguri!

Looking forward to adding this to my Kindle. I'm getting a lot more reading (and baking) done lately.

Hi, Ellen! A lovely interview and especially neat to learn about your family's Italian side. Thanks for sharing!

Sorry I missed this one, Ellen. But I'll catch up. Wonderful interview, Grace!

Wonderful interview, Grace. Ellamia - can't wait to sink into both your books. Looking forward to meeting your Italian side.

Hi all!! thank you for the great comments and apologize for the delay. On top of the corona stuff her in CA, we had a coyote in our backyard!! The day has been CRAZY.

I'm thrilled to see a couple of other disco queens here, Annette and Shari! Margaret, yay! KM, EB, Warren, Vicki, and Kait, thanks SO much for reading my interview. xoxo