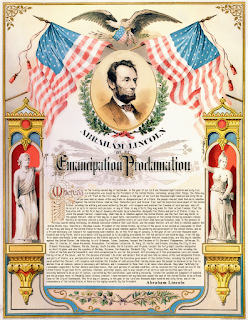 My father always maintained that honesty was much more than avoiding telling lies. He saw honesty as an active policy of being clear and open. I once witnessed him apologizing to a minister because he had assumed a particular sermon topic would have a specific emphasis and it did not.  He had mentioned to me what he thought the minister would say, but he had not said anything to the pastor. That man would not have known what my father thought if my father had not apologized to him.

In writing, I have often observed that what is not included can be as suggestive as what is. For example, I have questioned an entry in the National Archives. I emailed them months ago. They replied they would get back to me. I am still waiting for their response.

As background, if you’ve read my blogs you know that I am an admirer of Abraham Lincoln.  In fact, my most recent book is about the sixteenth president. Now for a word from our sponsor (me):

During my efforts to publicize the book, I encountered people who blamed Lincoln for socialism, communism, Nazism, every single death during the United States Civil War (all by himself), too much government, too intrusive government, income taxes, starting the Civil War for a variety of nefarious reasons, and mistreatment of Native Americans after his death, among other problems. He was described as a racist tyrant murderer. I noted purposeful misrepresentation, also known as lying. So, I admit I am unusually sensitive to how Lincoln and his legacy are described.

Here are the links to the National Archives about the Emancipation Proclamation as a document:

And a description of the document

The description reads in part:

Despite this expansive wording, the Emancipation Proclamation was limited in many ways. It applied only to states that had seceded from the United States, leaving slavery untouched in the loyal border states. It also expressly exempted parts of the Confederacy (the Southern secessionist states) that had already come under Northern control. Most important, the freedom it promised depended upon Union (United States) military victory.

This description is often cited as showing that the Emancipation Proclamation did not free any slaves when it was announced.  In fact, that is not what the description says, but it is easy to draw that conclusion because of what is not mentioned. The proclamation expressly exempted parts of the Confederacy that had already come under Northern control. However:

Personally, I think the description is so incomplete that it is seriously misleading and I am upset that the National Archives presents such a poor description to people who inquire about one of the seminal documents of our national history.
Posted by Warren Bull at 12:00 AM

Truth is a valuable, but often under-represented, trait. We are constantly re-interpreting history through new lenses.

Warren, keep us posted on your correspondence with the Archives. I hope they take this into account.

Thanks, KM, Margaret and Shari

Did you hear there is a 12 word phrase you can tell your man... that will trigger intense feelings of love and impulsive attraction for you buried within his chest?

Because deep inside these 12 words is a "secret signal" that triggers a man's instinct to love, cherish and look after you with his entire heart...

This instinct is so hardwired into a man's brain that it will drive him to work better than before to make your relationship the best part of both of your lives.

As a matter of fact, fueling this all-powerful instinct is absolutely important to having the best ever relationship with your man that the instance you send your man a "Secret Signal"...

...You'll immediately find him expose his mind and heart for you in a way he never experienced before and he'll recognize you as the one and only woman in the world who has ever truly attracted him.