An Interview with Vickie Fee by E. B. Davis


Broke, unemployed barista Halley Greer is shocked when she inherits an Art Deco movie palace from the great uncle she remembers meeting once as a child. She moves to the charming tourist town of Utopia Springs, Arkansas to claim her legacy.

In addition to the timeworn theater, she discovers she’s also inherited a trash-heaped apartment, family secrets, her uncle’s friends, a stealthy calico kitty—and an adversary.

With a whole latte help from her new friends, the feisty barista fixes up and re-opens the theater as a coffee and wine bar, showing classic films. She generates some steam with a hunky local—and risks getting burned. The opening night of My Fair Lady looks like a big hit, and her new life feels like a bit of movie magic, until a customer turns up dead during intermission.

With the cops eyeing her as a suspect, Halley digs into the victim’s life and runs into a tangle of blackmail and secrets. Can Halley and her friends unmask a killer before the curtain comes
down for keeps?
https://vickiefee.com/#CafeCinema 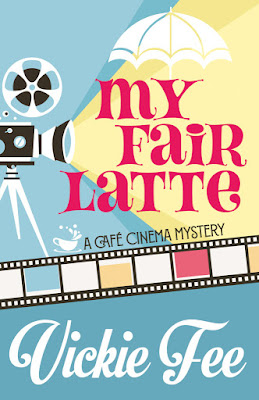 The setting is interesting because the Arkansas topography and history play a role in the plot. The characters claimed my interest as did their relationships, a mix of generations in a small tourist town.

Main character, Halley Greer, is an out of work barista, but she has the energy and spirit to attract new interest in her great uncle’s old theater, the Star Movie Palace. Her knowledge of old movies comes from her family, having grown up viewing them. Using her barista skills, she combines what she knows with what she has—an old theater—into a unique business. But that also makes her vulnerable—to murder charges.

I never thought of Arkansas as southern, perhaps because it borders Texas and Oklahoma, which I consider west or Midwest. What characterizes Arkansas as south—culture, history, food?
I grew up in bordering Tennessee, but both my dad and my husband grew up in Arkansas. The food, culture—and accents are decidedly southern.

Is Utopia Springs, AR, based on a real place?
Yes! It’s a fictional town very much inspired by the charming tourist town of Eureka Springs, Arkansas. It’s a little over an hour’s drive from Branson, Missouri, which is probably better known. My husband and I have vacationed in Eureka Springs a few times and enjoyed it. 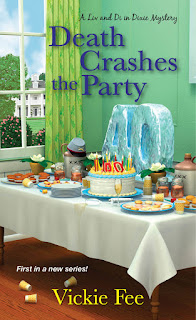 Like Seattle, Utopia Springs built itself over top of an old Utopia Springs due to flooding. You mentioned the town has a trolley system because of its steep hills. Is that the source of the flooding problem? Are there towns in Arkansas that solved flooding in a similar fashion?
I borrowed this part of the story heavily from Eureka Springs history. The original buildings there were built near a stream that frequently overflowed. My understanding is some other towns in the 1800s also raised their street levels to address flooding. In Eureka Springs, lavender glass inserts in the sidewalks allowed sunlight to filter through to the resulting “sidewalk tunnels.”

What are escape rooms? Does Kendra’s interest in history qualify her to run Hidden Clue Escape Rooms?
Generally, a group gathers in a themed room and is given a clue to get started. They then have a time limit (usually an hour) to look for clues and solve a series of puzzles that “unlock” the game and allow them to “escape.” Escape rooms have become popular entertainment, and are sometimes described as stepping into a live action video game. Themes can run the gamut from dungeons to spaceships. In Kendra’s case, she bases the rooms and their settings on historical bank robberies, jewel thefts and such. She had previously worked in museums. Her brother, a banker, helped her open the Hidden Clue Escape Rooms. His business/finance knowledge and her history/curation knowledge proved a good combination for the business.

Due to Kendra’s historical knowledge, she finds a clue to the murder among the victim’s household goods. I wasn’t aware that Jesse and Frank James were from the area. Are there legends about heist proceeds being hidden in the underground tunnels of Arkansas towns? Jesse and Frank’s step-grandparents had a house near Eureka Springs that they were known to visit. The James gang was known to have buried loot in and near caves that they marked with cryptic symbols on rocks and cave walls. I don’t know of any historical evidence that points to the underground tunnels in Eureka Springs. But much of the Jesse James lore is more legend than verified history, and Utopia Springs is a fictional town, so I felt free to mix a bit of legend and history, along with my own flights of fancy, into the story.

Nick Raiford owns Ozark Trail and Stream, a store catering to outdoor adventure for tourists. He’s about the same age as Halley, fit, and good-looking. Why isn’t she attracted to him?
I think she is attracted to him. But, she’s a bit gun-shy about relationships, and Nick has a case of foot-in-mouth disease around women. Things just haven’t gone smoothly between them. 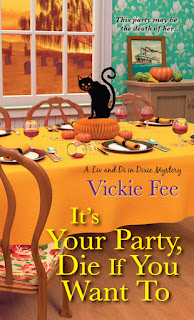 What is it about Halley that makes Uncle Leon’s cat, Eartha Kitty, adopt and defend her?
Cats tend to like people who feed and adore them, and Halley does both with Eartha. Plus, the apartment was home for Eartha before Halley came on the scene, so she may be a bit territorial. I like to think maybe Uncle Leon is somehow watching over Halley, and Eartha acted under his influence.

George and Trudy Mayfield own an art and jewelry gallery. They were friends of Uncle Leon’s and “adopt” Halley. Did George and Trudy have their own children?
George and Trudy are seventyish and have been married twenty years, so they were past the having children part when they married. Trudy has a son from her first marriage named Tony, who lives in Philadelphia.

While Halley appears to have a new family of sorts in Utopia Springs, she’s not close with her mother. Where are her parents located? How did Halley lose her brother?
Halley’s mom is still struggling with grief. Her parents retired to Florida about a year after her brother died of cancer.

Why is Kendra in denial about her attraction to restaurant owner, Joe Chang? 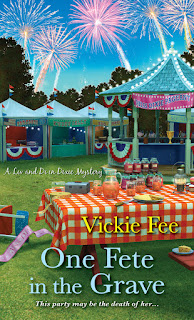 George’s take is that each is waiting for the other to make the first move. (And he thinks Joe should step up.)

Halley is close with her grandmother who lives in Arizona. How does Halley’s grandmother connect to a local priest? Why does she?
Halley’s grandmother worries about her granddaughter all alone in a new town. Not content to let her prayers for Halley suffice, after asking Halley the name of the local Catholic parish she phones the pastor, hoping he’ll keep an eye on Halley’s welfare — and tell her Grammy what’s going on. (He’s pretty smart in his conversations with both women.)

What’s next for Halley?
Some expansion in her business, a ride on Utopia Springs scenic railroad, perhaps a new romantic development and, of course, a new murder.

What are Jack Daniel’s Whiskey Balls? Would you part with the recipe?
Sure! They’re easy to make, and I get requests. 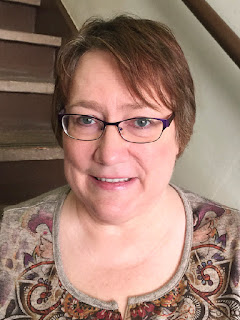