The Noir at the Bar Experience 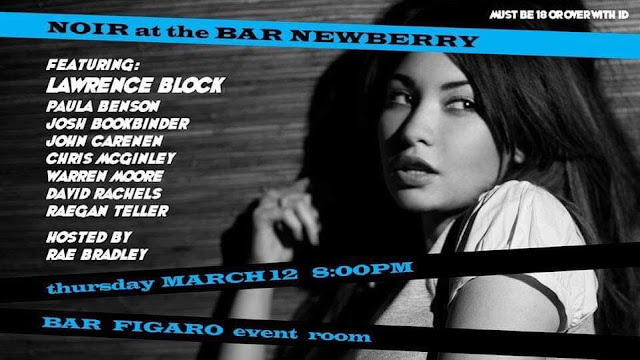 For the last few years, I’ve been hearing about gatherings called “Noir at the Bar,” where groups of authors gather at local watering holes to stand onstage before a mike and read grim tales to an audience indulging in hard liquor. Usually, the evenings are advertised with posters portraying dark streets, fedoraed detectives, or wide-eyed damsels in distress.

I attended my first Noir at the Bar last year in Newberry, South Carolina, and found myself captivated by listening to the authors read their work. That evening, S. A. Cosby presented his short story, “The Grass Beneath My Feet,” which went on to win the Anthony for best short story at Bouchercon 2019 in October. Watching him receive the award in Dallas made me remember how much I had enjoyed hearing him read the story.

This past week, I felt fortunate (particularly in light of so many cancellations due to the corona virus uncertainty) to have been able to participate in my first reading at Noir at the Bar in Newberry, South Carolina. The event took place at Bar Figaro, a delightfully appointed location featuring brick walls, wide planked wooden floors, tiffany domed fixtures, red velvet chairs, and large evocative paintings. (A great place for a St. Patrick's Day beverage!) Warren Moore, a Professor of English at Newberry College, medievalist, songwriter and drummer for a garage band, and fabulous author of dark mysteries, organized the evening with a terrific lineup of authors.

Warren has described the evening beautifully in his blog message, “Noir in the Time of Covid-19 or SARS at the Bar.” (And, many thanks to you, Warren, for your kind words about my story.) Our wonderful host for the event was Rae Bradley, a local stand up comedian, who masterfully introduced us and kept things moving.

The lineup began with David Rachels reading two short works that got us all in the mood for an evening of adventure. Raegan Teller (aka Wanda Craig) followed with the tale of a funeral director’s wife who found a unique way of turning her husband’s failing business around. John Carenen, a MFA graduate of the prestigious University of Iowa Writers Workshop and former professor at Newberry College, continued with an excerpt from the second book in his Thomas O’Shea series, A Far Gone Night. Chris McGinley, Warren’s former office mate from Kentucky, ended the first half with two Appalachian Noir stories, one involving a haint.

After a break, Newberry College sophomore English major and starting pitcher (who had just heard all future college games had been cancelled) Josh Bookbinder entertained us with a speculative tale about magical eye glasses. I had the privilege of following Josh. Chris McGinley helped me with a chair and repositioning the mike so I could read “Ghost of a Chance,” about pirates and ghost ships. Warren took the stage next with a story of academic intrigue, “Alt-Ac,” soon to be published in The Darkling Halls of Ivy, an anthology edited by Lawrence Block. Finally, Mr. Block concluded the evening reading from his new book, Dead Girl Blues, which he will be independently publishing. He’s written a great message about why he wrote the book and decided to publish it himself.

Besides being a wonderful time of hearing spellbinding stories and being with friends (thank you to Phil Lenski and Reggie Hall for venturing out to support me), it brought me back to considerations for sequels to “Ghost of a Chance,” which I wrote a number of years ago, but always wanted to revisit. In preparation for the event, I reread the story aloud numerous times, trying to get all the nuances right for the listeners. I reacquainted myself with Heck, the protagonist, who came from an aristocratic family, was kidnapped by the pirates as a child, then was never ransomed. Despite his dire circumstances, he continued to long for a family and, in the end, got one of sorts. Since that night, I’ve been scribbling new ideas about Heck’s fate. I think he needs to appear in another story. Maybe two.

Please if you have the opportunity to attend a Noir at the Bar, go. Not only will you support the authors, but I’ll bet you'll have a terrific time.

Our Pittsburgh Sisters in Crime chapter has held a couple of salons, which are handled much the same way, but not in a bar. I may suggest we try this for our next one!

Annette, you would love it! We've had such a great time.

I'm in love with Bar Figaro and I need to find out more about Heck. Can't wait to catch up with his adventures. Is Ghost of a Chance available?

Geat idea and new to me. Sadly, I'll have to wait a while to be able to participate.

What a cool evening! Such a variety of work and authors. I now have some stories to chase down.

Thank you, Margaret, it was! Kait, you feel welcome as soon as you enter, like the Cheers bar. Thank you for asking about Heck and "Ghost of a Chance." It was published in an anthology called A Tall Ship, A Star, and Plunder, which featured pirate tales from ancient times to spaceships. It is available through Amazon at https://www.amazon.com/Tall-Ship-Star-Plunder-ebook/dp/B00I7JJIUY/ref=sr_1_1? keywords=a+tall+ship%2C+a+star%2C+and+plunder&qid=1584471089&s=digital-text&sr=1-1
(e-book, hardcover, or softcover)
Warren and Shari, wish you could come to Newberry this fall.

Sounds like a great time! I hadn't heard of this before.

I guess we'll all have to wait a while before we can have live events like this again.