Did She Fall or Was She Pushed? By Jeannette de Beauvior

I’ve always liked bleak stories, and the lyrics to Linda and Richard Thompson’s Did She Jump or Was She Pushed have been playing in the back of my mind lately. Provincetown—where I live, and where my current mystery series takes place—is gearing up for the 400th anniversary of the arrival of the Mayflower and the signing of the Compact in our harbor, and I’m contemplating a very real mystery that accompanies the story.

Of course, I’m always poking around history for stories. Nearly every mystery I write has some sort of historical component, because I’m fascinated with the idea of secrets. We all keep them: individuals, communities, groups, countries. And once in a while, the fear of having them revealed can lead to murder. 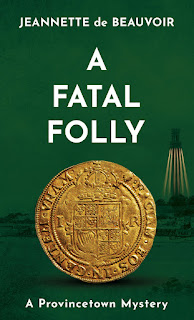 History and place are tightly connected. I suppose I could make up a place and make up a history to go with it, but why go to all that effort? The truth is, many if not most places have secrets, have something dark in their pasts, have events and situations that could very well make for a modern-day mystery. Once in a while I stop myself and acknowledge, You can’t make this stuff up. If I tried, it wouldn’t be nearly as good.

Take the first book in my series about Martine LeDuc, PR director for Montréal, in which four women have been murdered. Martine discovers they were all looking into the city’s past, when orphans were transferred to a psychiatric hospital and made the subjects of medical experimentation in collusion with the CIA’s MK-Ultra program. All the murdered women have a connection to these historic situations, and were killed to keep someone else’s role from becoming public. Martine finds herself standing between the killer and his getting away with it all, and—as any mystery reader knows—that’s not a good place to be.

You can’t make this stuff up. MK-Ultra even has a Wikipedia page, for heaven’s sake, but no-one seems to know about it.

And then there’s Sydney Riley, the protagonist in my current series. She’s the wedding planner for an inn here in Provincetown, but she has a nasty habit of finding whatever dead bodies happen to show up in this tourist destination. The most recent book in the series, A Fatal Folly, draws on the sinking of the very real pirate ship Whydah off Cape Cod—and who wouldn’t kill for pirate treasure?

Which brings us to 2020 and the question: did she fall or was she pushed? Most kids learn about the Mayflower in school, but what they don’t learn about is the absolute danger and misery of the crossing. It took 66 days from September to November—the worst weather imaginable, with storms and high seas; everyone was seasick; going up on deck was a dangerous respite from the crowded conditions below (the Mayflower had taken on the passengers from the leaking Speedwell and so was significantly overcrowded). All in all, a beastly time was had by all.

We know about the Mayflower voyage and the first few weeks in the New World from the diary of one William Bradford, who later became the first governor of Massachusetts and who came across with his wife, Dorothy May, who apparently was able to survive the wintry Atlantic crossing perfectly well. The ship anchored in Provincetown Harbor, the men went off to explore the area, and Dorothy slipped off the deck and drowned.

Really? She survived the storms, the sleet, the waves, and once the ship was at anchor in one of the world’s most protected harbors, she slipped and drowned? Is anyone here thinking? And then sometime in the 1800s a novelist got hold of the story and posited suicide as the real cause of her death. Again, really?

Unfortunately, there’s no way to know what actually happened. I’ve tried, and primary-source documents are few—and mostly biased. I probably won’t write about it, because when I incorporate history into my novels I want it to be as accurate as possible, but honestly… did she fall or was she pushed?

And to me, this is the place where being a mystery novelist and being a human being come together. Not many people outside of Montréal knew of the Duplessis Orphans, or of WW2’s Operation Fish; I told their story. Not many people outside of Provincetown knew of the Whydah, or the Portuguese fishermen and their losses, or of the AIDS deaths here; I tell their stories. History is as alive as we keep it, and there are so many voices that deserve to be heard. And if we can weave it all into a captivating mystery… so much the better! 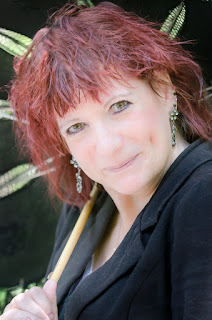 Award-winning author Jeannette de Beauvoir writes mystery and historical fiction (or a combination thereof!) that’s been translated into 12 languages. A Booksense Book-of-the-Year finalist, she’s a member of the Authors Guild, the Mystery Writers of America, Sisters in Crime, and the National Writers Union.

All her novels are firmly rooted in a sense of place, and her delight is to find characters true to the spaces in which they live. She herself lives and writes in a cottage in Provincetown, on Cape Cod, Massachusetts, and loves the collection of people who assemble at a place like land’s end.

The Sydney Riley Provincetown mystery series is in its fifth installment on with the release of A Fatal Folly in November. The next book in the series, The Matinée Murders, will be coming out in June 2020.

She also teaches writing courses both online and onsite.