Did I Get that Right?

investigating. As she exits her car, she catches a glimpse of movement in the alley next to the apartment building.


All along the alley, dogs begin barking.

She dashes up the stairs and locates the apartment she’s seeking. She knocks at the door, and it swings open. The scent of cordite fills the room. Someone has just fired a gun.

What’s wrong with this scene?

As Lee Lofland, a former police detective who writes extensively and acts as a consultant for many authors, TV and movie writers, would tell us: Cordite has not been used since the end of World War II in US ammunition. If you want your contemporary fiction to be believable, don’t have your characters detect cordite! It’s a dead giveaway you don’t have a very good handle on crime scenes, and you haven’t done your research.

Granted, fiction requires the reader to accept the author’s world and characters as “real.” But that doesn’t mean people need to accept the suspension of how the world really operates.

Recently I have encountered several stories that dodge reality in ways I find disconcerting.

In one, medical personnel have apparently never heard of HIPAA, the Health Insurance Portability and Accountability Act of 1996, which outlines regulations for protection of the privacy of patients. It is so strict that, in some states, the parents of a 13-year-old mental patient cannot access his/her records without the permission of the child. Despite this, the parents are still responsible for paying for the mental health services.

There’s the case of a tough-but-attractive female protagonist, who meets the equally tough-but-attractive local law enforcement officer in charge of the case which she is investigating. They develop a questionably inappropriate relationship, which will surely lead to sex by the end of the story. After resolving their issues of trust, discuss the confidential details of the case at hand.

And professional ethics! In another novel, a school guidance counselor helpfully fills our inquisitive hero in on details concerning a student’s disciplinary record.

Likewise a social worker spills the details of why a child is in foster care.


Other instances show a basic misunderstanding of how criminal procedure works. Investigating
officers warn a suspect not to leave town. Unless he is under some kind of supervision, like probation or parole, he is free to leave town or go anyplace else he pleases. 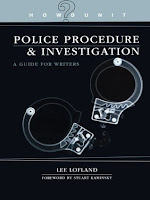 Or the FBI is called in to deal with a purely local matter, and our earnest law enforcement officer is relegated to the background of the investigation while the “pros” take over.

A lot of this is common sense. People, even private citizens who don’t have a professional standard to uphold, respect the privacy of other people’s business. They may respond to a police detective’s request to share information, but very seldom will they talk willingly and at length with someone who has just shown up and is asking questions.

Writers have access to resources which can help. The afore-mentioned Lee Lofland has written Police Procedure & Investigation (Writers Digest Books) an excellent resource for authors. I use it frequently, and I know there are other valuable reference works out there.

What do you use?

"Don't leave town." That turns up so often that if a cop ever did say it, I bet they'd have a hard time doing it with a straight face.

Warrantless searches (without permission) are another that give me a chuckle, and happen often especially in cozies. Cops are very careful to avoid what's called fruit of the poison tree. That smoking gun may have been in a drawer they just happened to open (usually because the suspect cast their eyes repeatedly in the direction of the offending end table), but it can't be used as evidence.

I have the community resource officer in the local police department on speed dial.

You are so right, Kait. Using TV as a guide leads to numerous inaccuracies.

Wonderful, Margaret. That way, you get complete, updated to the minute, information.

I know a writer who is a former police officer who used "cordite" to describe the smell of gunpowder.

The Guppies are having a class in Police Procedure in April. I interviewed the instructor here last August, Bernard Schaffer, who is a writer, but primarily a police detective. I'm excited because I think he will really teach it like it is.

Even if you think you know, laws vary from state to state. I go to the state statutes to determine what my characters can and cannot do.

Interesting, Warren. What is the time period in which the stories are set?

No cordite, no talking out of school, but the principal legal people are always attractive, right? I mean, I've watched a lot of Law and Order, so I know. Bad guys and gals can be homely, though, or at least scruffy. And when a policeman/woman realizes who done it, he or she runs off without telling the subordinate, and gets into a dangerous position, and the subordinate has to figure out out where boss has gone and race there, but almost not make it, and help out. It's too bad about cordite, because the word has such a nice ring to it.

Thanks for recommending Lee Lofland's book. So far my protagonists have used nontraditional weapons and figured out how to escape detection, but law enforcement will have to come in sometime.