Who is Eleanor Oliphant? 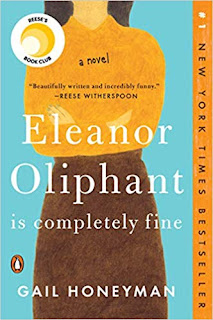 SPOILER ALERT: plot details of Honeyman’s Eleanor Oliphant is Completely Fine are revealed in this blog.


I’m in the process of enhancing characters in my current work-in-progress and took particular note of how Gail Honeyman created her main character in her debut novel, Eleanor Oliphant is Completely Fine. I focused on how and when Honeyman introduced character attributes to create a compelling, fully realized, and quirky heroine of her own myth.


Eleanor Oliphant is a young woman in her late twenties, a university graduate, working a dead-end office job she landed bearing the evidence of recent abuse: “a black eye, a couple of missing teeth, and a broken arm”. (p.3) At the end of her work week, Eleanor locks herself in her flat with two liters of Glen’s vodka to obliterate the weekend. She has no friends and, other than listening to a radio soap opera, The Archers, no other interests. She eats the same pasta with pesto every evening, and reads widely and indiscriminately, unable to discern which books at the charity shop she might enjoy.


Eleanor is clearly an unreliable narrator, but the mundane facts of her life ring true. She’s approaching thirty, and feels compelled to change—she has a teenage crush on the love of her life and is anxious for Mummy’s approval, though Mummy clearly abused her. Eleanor reveals her physical details: waist-length hair, pale skin, nose too small, eyes too big. She “aspires to average”, but will never be ordinary: her face is a “scarred palimpsest of fire.” (p.27) Eleanor, probably as a child, was badly burned. She lives in a post-incendiary reality, burying her earlier life: “I didn’t burn to ashes. I emerged from the flames like a little phoenix. I walked through the fire and I lived.” (p.74)


Initially, I thought Eleanor was either a quirky introvert or on the autism spectrum. After she reveals some of her backstory, I suspected she was emotionally shielding herself from the real world, with the social maturity of a thirteen-year-old. While Eleanor becomes obsessed with the on-line identity of a second-rate pop singer, she enjoys a growing friendship with her work colleague, Raymond. Honeyman uses fire-related images to enhance Eleanor’s increasing appreciation of life: “I felt a little glow inside—not a blaze, more like a small, steady candle.” (p.98) When Eleanor decides to get a haircut, “…the slow noise of the scissors slicing through it was like the sound of embers sifting in a fire: tinkly, dangerous.” (p.148) She emerges with a snazzy hairstyle and color job, terming herself “shiny”. Eleanor acquires new clothes and makeup, delighting in her “smokey eyes”.


Eleanor is finally ready to meet the pop singer of her dreams in public: “Tonight, I was going to meet the man whose love would change my life. I was ready to rise from the ashes and be reborn.” (p.214) Unfortunately, Eleanor realizes her love for the pop singer is a farce. During the concert, “smoke, gray, hazy, deadly smoke” fills the room and Eleanor has a flashback of the fire which scarred her face. “Fire. I heard screams and could not tell if they were mine. The bass drum beat fast with my heart, the snare drum skittered like my pulse. The spurt of adrenaline, speeding the tempo, nauseatingly strong, too strong for my small body, for any small body.” (p.226)


When Raymond rescues her from several days of binge-drinking, he gives her a stray cat, rescued after being set afire in a trash can. By adopting “Glen,” Eleanor has something other than herself to worry about: “I could not deny that I was drawn to her. She had an undeniably raking, alopecia-based charm and a devil-may-care attitude…”. (p.271)
Eleanor attends therapy sessions during several months of sick leave before she returns to her job. Of course, as a Classics major, her computer password remains: “Ignis, aurum probat,” or “fire tests gold.” Eleanor completes Seneca’s phrase: “and adversity tests the brave.” (p. 308). Eleanor has been tested by her own trial by fire, and emerges, “like an embryo forming—tiny, so tiny, barely a cluster of cells, the heartbeat as small as the head of a pin, there I was. Eleanor Oliphant.” (p.316)


Honeyman lays a trail of breadcrumbs providing clues to Eleanor’s childhood trauma. Eleanor’s weekly phone calls reveal Mummy to be a sadistic and manipulative monster. We learn how Eleanor views others—her work colleagues, the shop assistants who help her, and her lunch buddy Raymond. Through overheard dialogue, we learn what her colleagues think of her. The chapters detailing Eleanor’s attempts a body beautification are funny and sad. I love Eleanor’s good-natured quirkiness and her graduation realization of social norms: she mimics hand gestures and facial expressions, succeeds at idle small talk, and learns to reciprocate kindness.


And a gesture Eleanor might appreciate for Valentine’s Day, a Trader Joe’s bouquet of peonies: 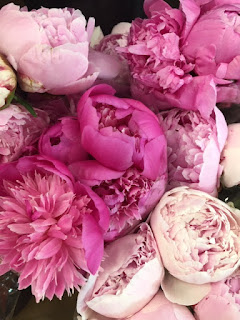 For once, I am nearly wordless. This book sounds both uplifting and disturbing. Not an easy tightrope for an author to walk. It reminds me of of the Sylvia Plath books I read in another era.

Hi, Margaret!! I'm reading it now, so I skipped the spoilers. It is so well written--and you're right, it's a guessing game with Eleanor.

Kait, Eleanor's humor and complete disregard for social conventions save the book.

Carla, I loved it from the first page, accepting Eleanor for who she is and enjoying the adventure.

My book club is reading this for its March selection. I have read it, and think it's a superb book.

I am now re-reading one of my favorite books, "Rafe" by Weldon Hill. It's horribly dated in terms of sexist views, so it reads more like a historic novel than a contemporary one, but I love the portrayal of 11-year-old Rafe, who doesn't question the situation in which he finds himself, but tries hard to do the right thing and make the best of it.

Kathleen, Rafe sounds like a book you could have written.

Connie, one of the girls left it behind after their Christmas visit. I found it, dipped into the first chapter, and was hooked. I like Eleanor the same way I like Semple's Bernadette: bright, quirky, determined to climb out of the mess their lives have become.