An Interview With Heather Weidner

As a member of the mystery writing community, I frequently cross paths with other writers, read their books, hear them speak, and wish I could get to know them better. But with the busy lives we all lead and living in different parts of the country, that’s not always possible. Heather Weidner is one of those writers. I’ve met her briefly at conferences, read her books and short stories, and been inspired by her helpful blogs and list of accomplishments. So it was a pleasure interviewing Heather and learning more about her and the latest book in her Delanie Fitzgerald Mystery Series, Glitter, Glam, and Contraband.

Private investigator, Delanie Fitzgerald, and her computer hacker partner, Duncan Reynolds, are back for more sleuthing in Glitter, Glam and Contraband. In this fast-paced mystery, the Falcon Investigations team is hired to find out who is stealing from the talent at a local drag show. Delanie gets more than she bargains for and a few makeup tips in the process. Meanwhile, a mysterious sound in the ceiling of her office vexes Delanie. She uses her sleuthing skills to track down the source and uncover a creepy contraband operation. Glitter, Glam, and Contraband features a strong female sleuth with a knack for getting herself in and out of humorous situations like helping sleazy strip club owner, Chaz Smith on his quest to become Richmond’s next mayor, tracking down missing reptiles, and uncovering hidden valuables from a 100-year-old crime with a Poe connection.       www.heatherweidner.com

Welcome, Heather, to Writers Who Kill.

You certainly did some interesting research for Glitter, Glam, and Contraband—drag queen performers, reptile breeders/distributors, and Edgar Allan Poe memorials. Please tell us about your research.

It was a lot of fun. I went with some of my writer pals (Rosemary Shomaker, Fiona Quinn, and Tina Glasneck) to the drag brunch at Godfrey’s in Richmond. We had a lot of fun, and the entertainers were really helpful. Plus, they had the best bananas foster French toast! I also had to do some research on pet store back rooms. I have two friends who were a great help. (Reptiles creep me out, so I had the heebie-jeebies for a while researching snakes.)

The diet requirements for reptiles would be enough to put off most people from wanting to own one. Have you ever owned reptiles yourself? What inspired you to write about them?

Delanie Fitzgerald, a private investigator, is asked to dig up information about candidates running for office by one of the other candidates. Did she not have a momentary qualm doing this? 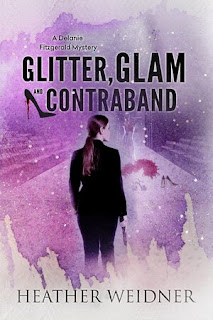 Delanie sometimes struggles with her work as a PI. On one hand, she feels she owes her paying client, but she also has to think about the ramifications of making some secrets known. Chaz Wellington Smith, the local strip club owner, is a good paying client, and he drags her into interesting situations (or dilemmas).

Delanie picked up needed information from the dark web. Have you ever gone into the dark web to do research? Is it something anyone can gain access to?

I have never ventured into the dark web. I am fortunate to work with some really great IT guys and gals who work in the security arena. They are great for sharing stories about real-life adventures and a variety of different types of crimes. And I am always there taking notes.

Duncan Reynolds, Delanie’s partner, tells her he could get some paranormal specialists in to check out strange noises occurring in their office. Have Delanie and Duncan ever been hired to investigate paranormal activity? Sounds like it might be interesting for a future book.

Duncan and Delanie love pop culture and anything geeky. I think you’re right about the paranormal twist in a future story. Stay tuned.

The city of Richmond is like another character in your book. You referred to a number of restaurants and other places. Did you use actual places?

I do use actual places except when a horrific crime takes place. I make those locations up. I’ve lived in Virginia all my life, and I love to share all the restaurants, historic sites, and culture of the area. In this book, I made up the Poe Statue. The real one sits in Capital Square across from the Governor’s Mansion. In this book, the Redskins Training Camp, Bon Air, Brandermill, the Richmond Coliseum, Short Pump, VCU, Virginia Museum of History and Culture, and the Poe Museum are all real places people can visit in Richmond, Virginia. Delanie also lives in a Sears Catalog house (built from a kit from the catalogue in 1939). There are quite a few of these homes stills standing in Central Virginia.

We both have a background in IT. It gave me lots of inspiration for murder victims and villains. How about you? Have any of your coworkers said they’ve recognized themselves in your stories?

I do work in IT. I’m a Quality Assurance and Governance Manager. And I get a lot of ideas about cybercrimes from research or coworkers. Nobody’s ever recognized themselves in a story. My characters are usually combinations of traits from several people.

What inspired you to make Delanie a private investigator rather than an amateur detective? 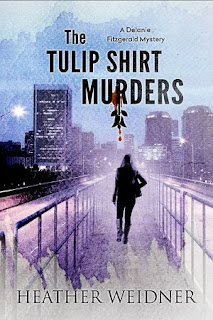 When I was plotting the idea for the series, I was looking for a job for Delanie. It needed to be in a field where she had a flexible schedule and a reason to be at crime scenes. About the same time, my Sisters in Crime chapter had a female PI as a guest speaker. She had some wonderful stories about her investigations, and suddenly, Delanie had a new job.

How did Delanie get her start as a private investigator and become partners with Duncan Reynolds?

Delanie’s father was a police officer, as is the elder of her two brothers. When her father died, she used her part of the inheritance to fund her business, Falcon Investigations. Delanie knew Duncan from her college days, and she knew about his special computer skills. Duncan’s hacking abilities give Delanie access to information that she normally wouldn’t have.

As a PI, Delanie becomes involved in a number of overlapping investigations. Was it a challenge keeping the storyline clear with her juggling so many different cases?

Delanie is often involved in smaller cases that do overlap. Sometimes, there is a connection between cases (the storylines), like in the Tulip Shirt Murders. This book contains three different cases, but the characters are a constant part of the arc.

Glitter, Glam, and Contraband doesn’t involve a murder. Does Delanie ever get involved in a murder investigation?

She does. In Secret Lives and Private Eyes, the mayor is murdered, and Chaz, the strip club owner, is arrested. She spends part of her summer helping him clear his name. There are a series of murders in The Tulip Shirt Murders that happen in different jurisdictions. Delanie and Duncan put the pieces together to prove to the police that there is a serial killer on the loose.

What’s next for Delanie Fitzgerald and her partner Duncan Reynolds? I hope we’ll see more books about them.

Before the next book, Delanie and Duncan will appear in two short stories. One explains how Chaz, the strip club owner, gets his infamous facial tattoo. They will also appear in an upcoming Mutt Mystery in “Strut Your Mutt,” where Margaret the Wonder Dog becomes a social media influencer.

Thank you so much for letting me visit the WWK and share stories about Delanie, Duncan, Chaz, and Margaret.

Thank you, Heather. I look forward to reading more books in the Delanie Fitzgerald Mystery Series.

Heather Weidner Bio
Glitter, Glam, and Contraband is Heather Weidner’s third novel in the Delanie Fitzgerald series. Her short stories appear in the Virginia is for Mysteries series, 50 Shades of Cabernet, and Deadly Southern Charm. Her novellas appear in The Mutt Mysteries series. She is a member of Sisters in Crime – Central Virginia, Guppies, International Thriller Writers, and James River Writers. Originally from Virginia Beach, Heather has been a mystery fan since Scooby-Doo and Nancy Drew. She lives in Central Virginia with her husband and a pair of Jack Russell terriers. Heather earned her BA in English from Virginia Wesleyan University and her MA in American literature from the University of Richmond. Through the years, she has been a cop’s kid, technical writer, editor, college professor, software tester, and IT manager.
Website and Blog: http://www.heatherweidner.com
Twitter: https://twitter.com/HeatherWeidner1
Facebook: https://www.facebook.com/HeatherWeidnerAuthor
Instagram: https://www.instagram.com/heather_mystery_writer/
Goodreads: https://www.goodreads.com/author/show/8121854.Heather_Weidner
Amazon Authors: http://www.amazon.com/-/e/B00HOYR0MQ
Pinterest: https://www.pinterest.com/HeatherBWeidner/
LinkedIn: https://www.linkedin.com/in/heather-weidner-0064b233?trk=hp-identity-name
BookBub: https://www.bookbub.com/authors/heather-weidner-d6430278-c5c9-4b10-b911-340828fc7003
AllAuthor: https://allauthor.com/profile/heatherweidner/
YouTube: https://www.youtube.com/channel/UCyBjyB0zz-M1DaM-rU1bXGA?view_as=subscriber

Congratulations on your new release. You've put Richmond, VA on the map for mystery readers. I look forward to reading your series.

Sounds like a fun series, Heather. I look forward to reading it.

I love your titles! Those and your covers should help you sell. Good luck!!

I admire people who can hold down a demanding job and still write a mystery series! You must be very organized, not to mention motivated.

Thanks so much for letting Delanie, Duncan, Margaret, and me visit the blog!