The recent virus scare coming out of China reminds me how becoming an author has made me write about danger rather than travel to perilous locations looking for it.

For two decades, while I worked for a multinational corporation, my friends thought I was crazy to travel, taking temporary assignments in places like Colombia during the Pablo Escobar years, jetting to Africa as an outbreak of Ebola was underway, and going to India when the bubonic plague threatened to turn into an epidemic in that country.

Yet I never felt in danger. I’d be in northern India when the plague was mostly concentrated in the south. Or I’d be in Morocco when Ebola popped up in the Democratic Republic of Congo. And as far as Pablo Escobar was concerned, his radar never focused on a foreign female accountant in a backroom examining financial data at her company’s Colombian affiliate.

Then I left my corporate job to start writing.

That’s when my friends concluded I was indeed crazy. Why would I abandon well-compensated employment to write fiction? 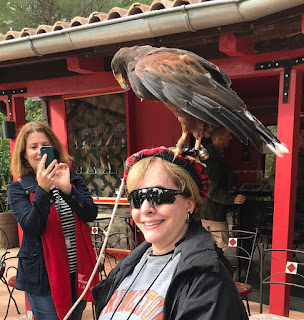 Besides my paycheck, a fringe benefit consisted of my business travel. The weekends, my own time, had provided opportunities to visit tourist sites, indulge in local cuisine, meet people, and luxuriate in cultural experiences of my host countries. Leaving my corporate job also upended risky ventures, such as swimming in the rio Amazonas in Brazil or chasing wild camels in the high, dry plateau near Ouarzazate in Morocco. Overnight my travel pursuits went from being lived out in real life to emerging as stories on a computer screen. I still travel for research purposes, most recently to Croatia, to check out falcons and Harris Hawks. One of these beautiful birds features in my latest novel.
When I started writing, a woman named Nikki Garcia came to life in my consciousness. She became the protagonist in my first novel, Waking Up in Medellin. Pure fiction, it’s set in the murky world of international finance. For the second book in the series, Nikki changed jobs from international finance to international private investigator in Coyote Zone (soon to be re-released as Danger in the Coyote Zone) set in Mexico. 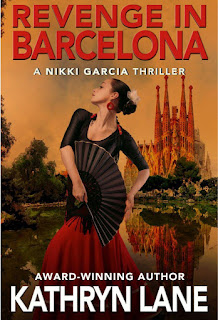 My latest novel, Revenge in Barcelona, finds Nikki escaping to Barcelona, Spain, after her life is threatened in Mexico. She discovers very quickly that the danger she is running from has followed her to Spain.

Now I live vicariously through Nikki. I place her in heaps of trouble, and she must fight her way out to survive. I’m taking advantage of my past travels to set my novels in exotic places. Since I never experienced a plague or viral epidemic up close, I will probably never write a story about an end-of-the-world crisis. But if I do, I’ll send Nikki in to do the real work while I sit at my desk carrying out the necessary research.

Kathryn Lane, originally from Mexico, took the long road to becoming an author. An artist in her early years, she became a certified public accountant to earn a living and embarked on a career in international finance with a major multinational corporation until she decided to take up writing. In her stories, she draws deeply from the prism of her experiences growing up in a small town in northern Mexico as well as her work and travel in over ninety countries around the globe. Her Nikki Garcia Thrillers are set in various locations:

Danger in the Coyote Zone, set in Mexico, won first place in the Action-Adventure category of the Latino Books into Movies award-2018.

Revenge in Barcelona, the latest Nikki Garcia Thriller is set in Spain. It was released in December 2019.

Kathryn’s collection of short stories, Backyard Volcano and Other Mysteries of the Heart, mostly set in the U.S. and Mexican border states of Texas, New Mexico, and Chihuahua, was named “Best Short Story Collection-2018” by Killer Nashville.

Kathryn and her husband, Bob Hurt, split their time between Texas and the mountains of northern New Mexico. She loves the arts and is a board member for the Montgomery County Literary Arts Council (Conroe, Texas). She is a member of Sisters in Crime and Mystery Writers of America.