Several years ago, I had the chance to take a class sponsored by Sisters in Crime New England with Donald Maass based on his book Writing the Breakout Novel. The students were intelligent and enthusiastic and had great questions. One person asked, "As an unpublished novelist, if you know you're writing a series and you have a great idea, should you hold it back for the second, third or later books?"

Maass's answer was to hold nothing back. Leave it all out on the page. You need to give it your all to get published. Trust in your imagination that something even greater will be there when you get to later books.

At least that's how I internalized what he said.

So in 2016, when I got the chance to write a Christmas novella as a part of my Maine Clambake Mystery series for the collection Eggnog Murder, I went for it. I included every tradition from my little Maine seacoast town: the parade of lighted boats, the day everyone shops in their pajamas, the festival of trees, Men's Night when the shops are open late and provide free gift-wrapping. After all, who knew if I'd ever get the chance to use all that good stuff again.

But then my publisher Kensington asked Leslie Meier, Lee Hollis, and me to create a second Christmas novella collection. I’d already written one holiday story where I’d thrown in everything but the kitchen sink. Now what was I going to do?

Luckily, the Boothbay peninsula, which roughly serves as the inspiration for my fictional town of Busman’s Harbor, had added a new holiday tradition. For the past four years, the Coastal Maine Botanical Gardens have offered Gardens Aglow. The gardens are dressed with over 500,000 LED lights.

Of course, I had to visit. The things we writers have to do in the name of “research.” The night we went was crisp and clear, cold but not too cold. My husband and I had an absolutely delightful time at this spectacular display. Gardens Aglow got me into the most Christmasy mood. Perfect for writing a holiday novella.

I changed the name of the place to the Maine Coast Botanical Garden and the event to Illuminations, because there’s a little unpleasantness when my protagonist Julia Snowden and her family visit. The family visit to the garden became the mid-point scene, the fulcrum that ratchets up the stakes and moves us from one part of the story to the next.

Donald Maass said you should trust your imagination to deliver something for the next book, but this was a case of the universe supplying what I needed.

Barbara Ross is the author of six Maine Clambake Mysteries. The seventh, Steamed Open, was released December 18, 2018. Barbara’s novellas featuring Julia Snowden are included along with stories by Leslie Meier and Lee Hollis in Eggnog Murder and Yule Log Murder. Barbara and her husband live in Portland, Maine. Visit her website at http://www.maineclambakemysteries.com 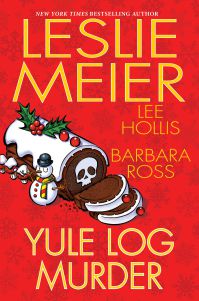 Fresh-baked cookies, pies, and cakes can warm even the frostiest Christmases in coastal Maine. But there’s little room for holiday cheer when murder is the new seasonal tradition . . .

“Yule Log Murder” by Leslie Meier
Lucy Stone is thrilled to be cast as an extra in a festive period film—until the set becomes a murder scene decorated in blood and buttercream icing. Returning to her role as sleuth, Lucy dashes to restore peace to Tinker’s Cove, unwrap a cold-hearted criminal’s MO, and reveal how one ornate Yule log cake could possibly cause so much drama.

“Death By Yule Log” by Lee Hollis
Hayley Powell’s holidays aren’t off to a very merry start. Not only has her daughter brought Conner—an infuriatingly perfect new beau—home to Bar Harbor, but a local troublemaker has been found dead with traces of her signature Yule log cake on his body. As Conner becomes the prime murder suspect, Hayley must put aside her mixed feelings to identify the real killjoy.

“Logged On” by Barbara Ross
Realizing she can’t make a decent Bûche de Noël to save her life, Julia Snowden enlists the help of her eccentric neighbor, Mrs. St. Onge, in hopes of mastering the dessert for Christmas. With everyone in the old woman’s circle missing or deceased, however, it’s up to Julia to stop the deadly tidings before she’s the next Busman’s Harbor resident to meet a not-so-jolly fate.

Kick back with something sweet and indulge in three bite-sized Yuletide tales too good to resist!
Amazon
Barnes & Noble
Kobo
IndieBound
Posted by E. B. Davis at 12:00 AM

I heard that same advice early on, Barbara. Not sure if I heard it from Donald Maass, but I've taken a number of his workshop, so it's very likely. It's also very true. Thanks for being here and sharing!

Thanks, Barb, for joining us at Writers Who Kill, and for the excellent advice.

Congratulations on your new release. Gardens Aglow must have been wonderful. Several years ago, we took the family to Celebration in the Oaks in City Park, New Orleans. Jammed with people, fantastic lights, and Papa Noel narrating a Cajun night before Christmas from his alligator-drawn boat.

Great comments. I know sometimes I'm tempted to "save" an idea for a future book or story, but always quash that idea, and include whatever fits naturally in whatever I'm working on. Glad to hear that technique supported!

I took a week-long course with Donald Maass and learned many things. He repeated his advice to make each work as strong as possible. If you had nothing left when you were done, that was fine because the story needed it all.

Congrats on your latest, Barbara.

Hi Barb, thank you for the timely advice. I'd love to take a class with Donald Maass! Looking forward to reading your holiday novella.

I've heard the same thing. It might have come from Maass or it might have been someone quoting him. Regardless, it's stuck with me.

Glad the universe stepped up to help you out!

Perfect timing, Barb - tis the season to begin collecting Christmas reading! What wonderful advice from Donald Maass, I've got his book, it must be heavenly to take a class with him!

Thank you, everyone. I'm happy to be here at Writers Who Kill. Glad the advice resonated.