In Memory of My Mother - Words Rather Than Silence 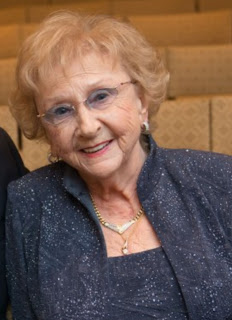 In Memory of My Mother –Words Rather Than Silence by Debra H. Goldstein


A few years ago, a fellow writer asked me why many of my short stories, blogs and one of my books had Jewish characters or Jewish themes. Before I could answer, she confided that she was Jewish, too, but never mentioned that fact in any of her writings. I asked her “Why?” and she replied she was afraid it might narrow her readership. My immediate response was that I never thought of that in terms of my works or any of the writings I’ve read by people of race, culture, ethnicity, religion or sexual preference different than my own. In fact, my reading and writing is deliberately diverse.


She disagreed with me. I pitied her narrowmindedness and the wealth of things she was missing. I also was disappointed by her silence.
My mother was a Holocaust survivor. She came to the United States with her nine-year-old brother when she was ten. Other than two uncles who lived in America, but weren’t particularly welcoming to the two children, her entire extended family was killed in the camps. Her parents, educated wealthy members of Vienna society, never thought Hitler’s rhetoric would reach them. My grandfather had medical, dental and rabbinical degrees although he practiced dentistry; they had a box at the Opera House; and they owned numerous apartments. By the time my grandparents realized they weren’t immune, they were lucky to get their children out of Austria.


For two non-English speaking children, adjustment was difficult, but they both learned English, did well in school, and grew up to be responsible adults. They also taught their children to be tolerant and to never be silent. They encouraged their children to be anything they wanted, but to remember the importance of honesty, caring, and being open-minded.


A few weeks ago, a man filled with hatred and anti-Semitism, murdered Jews in cold blood at the Tree of Life synagogue in Pittsburgh, Pennsylvania. During the past few years, there have been murders in mosques, churches, bars, and on the street simply because of hatred and animosity to other people’s religion, race, gender, ethnicity, sexual preference, or cultural beliefs. We can think these things are wrong, but if we stay silent in the face of these terrible acts and the language that incites them, I believe we are guilty, too.


My mother died four years ago on November 13. In her memory, I cannot be silent. Can you?
Posted by Debra H. Goldstein at 12:00 AM

I think all of us need to share our diverse experiences in our writing AND read about others' lives. It's how we learn to understand and be compassionate for opinions and lifestyles other than our own.

Diversity is the much-needed spice of writing.

Diversity is the much-needed spice of life. I agree with Annette that it is how we learn to understand and be compassionate for opinions and lifestyles other than our own.

We can’t learn about other cultures or religions unless we have experience with them firsthand or read about them.

A moving story and a lesson some today really need to learn. These must be some tough days for you, but thank you for sharing this.

Judy, Thank you for your kind words. Annette, Grace, Margaret, and Kait … diversity and listening are key. Thanks for dropping by today.

Thank you for sharing this, Debra! It's a lesson none of us should forget.

Sherry, Thank you for taking the time to read and post today.... it means a lot to share her lesson.

An important blog post, Debra. It reminds me that when I was looking for my first full-time reporting job after grad school, I was including amongst my clips an article about a bat mitzvah involving a twinning, but instead of being twinned with someone from Russia (as had been common a decade earlier), this girl twinned with a girl who was mentally retarded and couldn't learn the Haftorah herself. It was lovely. Anyway my boyfriend recommended I not send that clip, saying that it could clue hiring editors to the fact that I'm Jewish, resulting in me not being hired. I told him I'd rather they know, that I didn’t want to work for someone who was anti-Semitic.

A touching story, Debra. I detest any kind of discrimination. Such a waste of time, energy, and emotion. I won't live long enough to see a time when it no longer exists, but I hope future generations accomplish it.

Barb, thanks for sharing. Our heritage, our religion, all matter. and if we don't stand up for ourselves and for others, who will? History teaches us the danger of silence which is why when the other author leaned over and confided in me her fear of not being read, I was aghast. For me being Jewish is my heritage and being just as is being female. Diversity of all kinds must be embraced with words not silence

Earl, thank you... I can only wish the lessons of history and discrimination not to be repeated for anyone … in our lifetime would, as you note, be a miracle, but perhaps our children or grandchildren will figure it out. It would be nice.

As I am reminded, when confronted with human hatred, silence is complicity. Silence is violence. Yes, to the great crazy quilt of human culture. Thank you for sharing your mother's, and your, story.

Thank you for commenting and sharing your voice through your writings....silence is indeed complicity.

Debra, thank you for sharing this beautiful and powerful remembrance of your mother. We all can - and have to - do better, and live more bravely, in honor of those who came before us.

Debra, I feel so strongly about this that I don't know where to start or how to keep my comment concise. Maybe this will work:
I saw a meme online and shared it because it expressed how I feel. In short the meme said, " If you ever wondered what you would've done during the Holocaust or slavery, you're doing it now."
That is why we must stand up and be counted. Now.

Debra, I have been so grateful for the stories you have shared with me about your mother and your faith. How proud she would be for all you have accomplished. I remember also this summer asking if you minded about giving your master class on conflict in the sanctuary of my Lutheran church. We both laughed about the "conflict" of you presenting there. So much can be helped by being open and tolerant. Listening and learning. Thank you for sharing this important message. May this Thanksgiving be enhanced by your memories of your mother.

Thank you for sharing your family's powerful story.

Shari, I believe we stand on the shoulders of those who came before us (not my words, it is part of a song), but if we don't stand up for what they taught us, then we haven't learned anything.

Kay,
So well said. Thank you.

Paula,
The happiest of Thanksgivings to you. Even that holiday is a lesson to us all.... but one of my fondest memories was of you asking me about whether I would teach conflict in writing in a sanctuary for fear it would be disturbing... and I thought it was perfect. Tolerance and sharing rather than rhetoric and hatred is the only thing that will stop violence and give all of our children and grandchildren a chance --- even those who spew hatred the most.

Vicki, Thank you for stopping by and leaving a comment. It means a lot.

“To sin by silence when they should protest, makes cowards of men.”

A lovely tribute to your mom and an important reminder. My husband is Jewish. He's dealt with recent events with his usual humor, joking that he's going to take my name and become Dan Hansen. "And, if anyone asks, I've never eaten a bagel." But seriously having an avowed nationalists in the White House makes us both anxious.

"The only thing necessary for the triumph of evil is that good men should do nothing."


I think "men" includes all of us, and "do nothing" includes say nothing.

Warren,... thank you for sharing Lincoln's words. KM for Burke's … the irony, how many years must the same things be said. Vinnie... humor covers much truth and anxiety especially when it has a basis in reality.

Beautifully said, Deb/Spot. This is a lovely tribute to your mother and to you for being so kind to share it.

You've given us an important lesson/reminder here, Debra. Thanks so much!

Spot/Deb: An inspirational woman indeed. I love your tribute to her. Many things get my goat but intolerance is at the top of the list. Happy Thanksgiving to you, my friend. Margaret

Mary Margaret... As Edith Stein would say....
Thank you. We've known a lot of inspirational women, haven't we?