Something Worth Saving: A Book Review by E. B. Davis 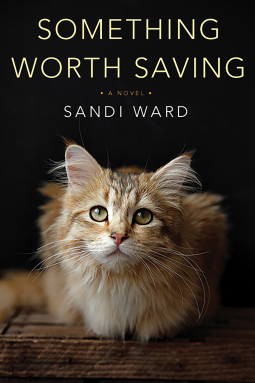 Something Worth Saving by Sandi Ward will be released on December 18th by Kensington Press. I downloaded an advanced copy having read the blurb, but then it sat in my Kindle for a few days. During that time, I forgot the blurb and opened the book expecting a light read. The nice kitty on the cover primed me.

Nope—not even close—what I read was so much more. It was riveting.

The book is a study of how human beings behave during a crisis, how youth learn to deal with stress from their elders, how good people cope with relationships in these times, and how a downward spiral so easily occurs, setting off other crises that cascade like dominoes.

When a DEA agent, husband and father, gets shot in the stomach during a sting, he deals with the resulting long-term pain with prescription pills, which his wife throws away. Then, he relies on his past coping mechanism—alcohol. When the story opens, the wife has already thrown him out.

She may have been too harsh because he cares about his family—he’s a good husband and father. The mother is a director of a preschool, who deals with the fallout of her decision. The oldest, a seventeen-year-old son, tries to fill his father’s shoes. The middle child, a sixteen-year-old daughter, acquires a questionable boyfriend, and the youngest, a thirteen-year-old son, is already struggling with an identity crisis on top of physical abuse.

The narrator of the book is the family cat. What happens, what is revealed, and how they all act out is shown through the cat’s perspective. Yep, unusual and strange, but there’s a reason for that. Being a different species, the cat is loyal to the family and wants the best for them, but he is not emotionally engaged. What transpires is a sociological and psychological study. In a way, the cat unwinds the mysteries that hide behind closed doors, like a sleuth. No one bothers about the cat. He’s free to observe, like an analyst.

This is the second book Sandi Ward has written using a cat’s perspective. Her first book, The Astonishing Thing, was published in 2017. Her next book, also using the cat’s POV, will be released in 2019 with the title, What Holds Us Together.

Something Worth Saving stays with the reader long after the last page is read. It demonstrates the reverberations of violence, the outward spiral consuming more than just the primary victim. The cat’s perspective illuminates the poignant and fragile human condition. The book reminds us of all we hold dear and how quickly and easily it can be lost.
Posted by E. B. Davis at 12:00 AM

What a compelling read! The cat photo on the cover may disappoint readers.

That cover certainly does a disservice to the book you described, but then again, I'm not a marketing maven.

I sometimes write from the perspective of an animal. It's a fun POV, and has the potential for viewing serious issues from a different angle.

This sounds really creative. I need to give it a look-- a serious story from a cat's perspective!

This really answered my problem, thanks! online gambling

Spot on with this write-up, I truly assume this website wants much more consideration. I’ll in all probability be once more to learn far more, thanks for that info. online casinos