What could be more appropriate than stories set in libraries? Crime stories, at that. Andrew MacRae, of Darkhouse Books, tells us about producing such an anthology. The stories are unique and interesting, and even his "boring" alphabetical list of authors has a twist--it's alphabetized by first names. 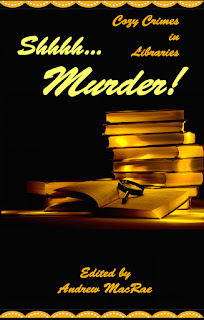 
Date-stamp ink runs in our family’s veins. When I was a child, our mother would call the library and ask that I be sent home for supper. I’m sitting in our local public library as I write this. For so many of us, libraries are a source of information, knowledge, and sanctuary. With that said, what better place to stage a few cozy crimes?


Darkhouse Books sent out a call for stories last autumn, and in turn received a wealth of submissions before the cutoff four months later. We reluctantly, very reluctantly, winnowed and parsed until we had a selection of stories, 304 pages worth, none of which we were willing to give up.


There are twenty-four stories by twenty-six authors in this anthology. You will find stories by seasoned pros, and by those newly arrived on the publishing scene. There are stories to inspire mirth, and stories that tug on heartstrings. We have stories from America’s heartland, and from the opposite side of the planet. Yet you will find as well, a pair of philosophical threads that run, intertwined, throughout this anthology. The first is that libraries are places of great value and should be treasured. The second message of this volume is, don’t mess with a librarian. They know things.


With so many contributors, it isn’t feasible to call out each story, but here is a smattering of what you will find in Shhhh… Murder!


Jacqueline Seewald brings her professional experience as a librarian to “Ask a Librarian.” Her story poses the question: ever wonder at what forbidden knowledge might be found in the back reaches of the reserved stacks?


Warren Bull sent us “Elsinoir Noir,” where libraries, mysteries, and Shakespeare meet in a three-way collision.


Michael Bracken’s story, “Mr. Sugarman Visits the Bookmobile,” is set in Quarryville, Texas, the small town setting of many of his stories. While we always welcome work by the prolific Mr. Bracken, this particular story touched us greatly.


Pick any major crime fiction publication from the last half-century, and chances are you’ll find a story by Josh Pachter or John Lutz. In this anthology you’ll find an ingenious dying clue piece, “DDS 10752 LIBRA,” written by both gentleman!


Canines and cozies go together well, as Amy Ballard demonstrates in “Bookish Dreams,” a story where a slobbering pooch named Billy assists in solving a murder.


Kate Fellowes postulates a book reading in her story, “Gotcha Covered,” for a newly published mystery novel in a small library on a dark and stormy night–what could possibly go wrong?


Home Front America in 1943 is the well-realized setting for nefarious doings at the library for “The Vanishing Volume,” by Janet Raye Stevens.


Albert Tucher’s story, “The Patience of the Dead,” takes the reader back in time again, to 1919, and features Beatrice Winser, the real-life librarian who ruled the Newark Public Library for decades.


A librarian’s neighbor is murdered in “The Christmas Stalker” by Nupur Tustin, and she must confront the possibility that there is a killer living in her quiet neighborhood.


Michael Guillebeau set out to write a short story and ended up writing a novel, 2017 Foreword Reviews Indie Award winner, Mad Librarian. The story that closes our volume, “Keeping the Books,” is Michael’s original short story.


We’ll finish by listing all of the authors, in boring alphabetical order, who allowed us to use their 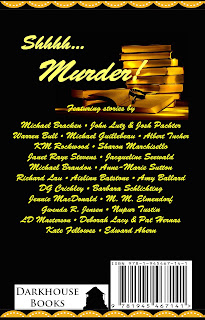 stories in our anthology.


Shhhh… Murder! is available in paperback ($12.95) through Ingram and Amazon. eBooks ($2.99) are available for Kindle, Nook, and Kobo. Details below.

I can't wait to read this collection! As a former librarian, now on the other side of the reference desk, crime in the library sounds like fun. Congratulations to all writers with stories in the collection, with a special shout out to WWKers KM Rockwood and Warren Bull!

Congrats to everyone included in what looks like a fantastic anthology!Libraries are such a natural fit for mystery readers and writers.

Sounds like quite a collection. I just wrote my first short story and now realize what a challenge it is. Congratulations to all the writers included in the anthology.

I'm going to order this book from Amazon today and can't wait to start reading it.

Shari, I did my stint in libraries, too. This is a fun collection.

Tina, you're so right--libraries and the mystery community are a natural fit.

Grace, short stories are fun to write, but intense. Hope to be reading yours soon!

Gloria, I hope you enjoy it!

So wonderful to see so many great authors. A special shout-out to Michael Bracken, a TRUE friend.

Vicki, it was an honor to be included in this anthology with such talented authors!