Autumn as a Metaphor

Earlier this week, I crossed the 50,000-word mark in the first draft of my newest novel. I’ve set a target of 1,000 words a day, which I have been meeting and exceeding. I’m enjoying the process of getting to know characters and their challenges, and at this pace, I’ll have the first draft complete by the end of November.

This is a perfect time for me to be working on a first draft: Autumn is a metaphor for my writing process. Hey, you’re thinking: Linda Rodriguez is the acclaimed poet on Writers Who Kill, I’m the numbers guy. Let me try anyway—Autumn is a time for planting seeds, and only in Spring do we discover which ones will grow into something.

With leaves off the trees, my view of the woods changes. The gaudy colors that draw tourists now coat the ground, still a beautiful sight though it will soon be covered by snow. With Summer’s dress stripped by cold and wind, what’s left to observe are the structural bones of the
land.

Rocks, once hidden by ferns and grasses are now visible, poking from morning-frosted ground. I can see the mosses and lichen, indicators of clean air, covering the now visible rock. These rocks are a physical reminder of the region’s geology, of how glaciers scraped topsoil from the ground and dropped erratics (rocks from other areas) as the ice melted.

This is the ancient history of my woods. I can “see” them today without knowing the effect of glaciers, but I can’t know them and understand the hows and whys of their existence without this deep knowledge. Glaciers are to my woods as the Irish Famine is to the McCree family as it brought Seamus McCree’s ancestors to the New World. Nothing that comes after will be the same.

In Summer, the forest appears as a unified whole, composed of many species and generations. With the leaves off, each tree shows its complete form, from which nature will hang a new set of clothes the following Spring. Each tree tells its individual story in straight or twisted trunk, in limbs broken by wind storms or sheared off by the weight of snow storms when they still held their leaves. Some trees lean in toward an opening in the canopy. Those exposed to prevailing winds lean away from it. In the slanting rays of Autumn’s sun, each tree casts its own long shadow across the land.

Some trees are survivors of earlier trauma. Trees that years ago had their central shoot broken have a crook in their trunk where a branch turned upward to become the new central lead. A few seem to grow straight from rocks, their long roots exposed before they plunge into the ground. A half-dozen trees grow in a straight line. Not planted by humans, they came into existence because a long-dead nurse tree that crashed to the ground fed them with its rot, allowing this next generation to fill the space its falling created.

The evergreens stick out from their deciduous brethren: two separate survival strategies on display. The ground and water determining which will work better for this acre or that.

What a dull forest (novel) I would have if every tree (character) were the same. How shallow my understanding if all I can see is their Summer finery. 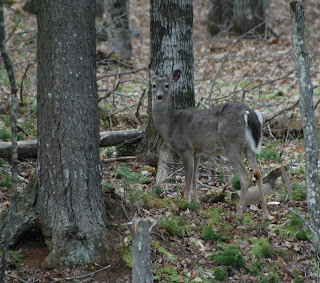 Plants alone do not make a forest. Without animals, they couldn’t last long. Strategies for animal survival become more obvious as Autumn sets in. Chipmunks and red squirrels forage under my sunflower feeders, stuffing their cheeks with seeds to store for Winter. Bucks and bull moose thrash about leaving scratchings on trees and bushes where they try to scrape off the itchy, drying velvet covering their antlers.

Insect-feeding birds migrate south where they can still find bugs. Geese pass overhead in long, honking skeins. Ducks and kingfishers leave the lake before it freezes over. Sometimes a few stay too late and the ice catches them, forcing them to wait for an Indian Summer to give them one last chance.

Autumn brings with it tiny disasters that suggest how the plants and animals will react when Winter comes: the early snow when leaves are still on the trees; heavy rains that flood low-lying areas; hunters looking for food or trophies. These character tests set the stage for Winter’s ultimate challenge to survive. But that’s a blog for another day, another season. 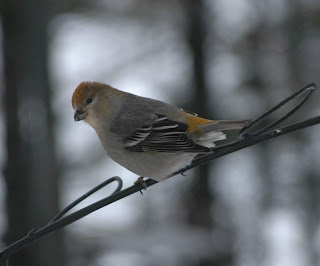 After my daily writing, planting seeds for the future rewriting that eventually becomes a publishable novel, I often take long rambles in my woods. And every day I learn something new about them.

* * *
James M. Jackson authors the Seamus McCree mystery series. Empty Promises, the fifth novel in the series—this one set in the deep woods of Michigan’s Upper Peninsula—is now available. You can sign up for his newsletter and find more information about Jim and his books at https://jamesmjackson.com.

Still waiting for the leaves to turn in Cincinnati, though I'm finding the season a productive writing time. Yesterday I drove through a windstorm on my way home from Indianapolis: as the eighteen wheelers were blown from side to side I was caught in a vortex of leaves, small branches, and random pieces of plastic, an apt metaphor for my current mind-set.

Margaret -- we have a couple inches of snow on the ground, but it should melt away by the afternoon as temps rise into the low 40s. I'm glad you and the 18-wheelers managed to dance past each other.

Beautifully written, Jim. You show that we can learn so much from nature, if we only take time to look.

Thank you, Jim, for an eloquent and thoughtful post on a quiet morning. Autumn is just arriving here in the mid-Atlantic. My favorite season, and it seems to go by so quickly.

You're very welcome Ramona. My favorite season as well. And, after experiencing some early winter weather in the U.P. I return to the south and get a second dose of autumn (although the south doesn't do it up the same way as the north).

Crisp autumn afternoons when the world feels energized and anything possible!

I think you can claim poet on your writerly credit sheet -- this was lovely. I look to autumn to rekindle my creativity too--may it be good to both of us!

Thanks, Tina. Fingers crossed it will be.