Lycoris radiata. Other common names include “British Soldiers,” “Equinox Flower,” “Guernsey Lilies” and “Surprise Lilies.”  A member of the amaryllis family that blooms in early fall in the southern United States. 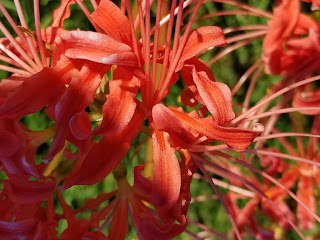 In Alabama, most of our flowers bloom in the springtime. Nothing can beat the spring explosion of color in our area of the country, especially in those rare years when the weather and climate coincide to allow everything to burst into bloom at once. After spring, the splashes of color become rare enough that the few flowers making them stand out. The most striking of these outliers is the spider-lily, which technically is neither a spider nor a lily, but a member of the amaryllis family. 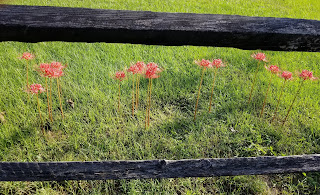 As a writer, I like words, including multi-syllabic words I can play with. “Serendipity” is one of those words. It has a happy ring to it, fitting since the ideas of good fortune and pleasant surprises are intricately intertwined with its meaning.

You wouldn’t think that serendipity and spider-lilies have much to do with other, but they do. Spider-lilies distill the essence of serendipity. Spider-lilies pop up unexpectedly during the months of September and October wherever one of their bulbs happens to have migrated, and always in groups. Unlike most flowers, spider-lilies tend not to be planted deliberately by gardeners seeking fall color, at least not in Alabama. They just happen.

A day or two after a good rain in early fall, the flowers spring up from nowhere at odd spots to grace a road side, the edge of a forest, an abandoned yard, a derelict building. Even the spider-lilies that have the temerity to pop up on lawns mowed regularly on Saturdays manage a few days of glory mid-week and still show up year after year after year, never quite when you expect them and never quite where you remember them being the year before. 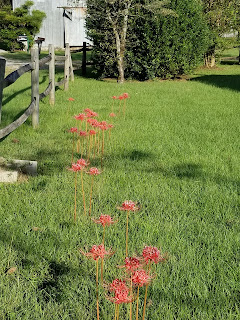 Whether I’m driving to work or headed out on an errand, I experience a rush of joy when I pass a formerly unadorned strip of road side that has, overnight, sprouted rows or clumps of these gorgeous red flowers. I can’t predict where they’ll be or when I’ll see them, but I’m always happy when I do. 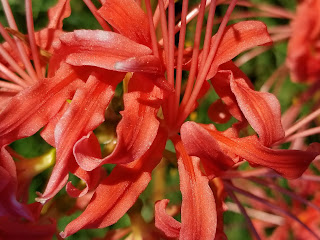 This has been a late frost year around where I live, and the mums and marigolds are still beautiful. The leaves are slow to change, but the burning bushes are beginning to show their bright red.

I have several anemone plants in fall bloom. So pretty, and a nice change from mums and asters.

Our leaves are finally tinged with red and yellow, though a recent windstorm prematurely ripped many leaves off the trees.

That would be a lovely occurrence in our area. The mystery is how they migrate! If they are bulbs of some type, they wouldn't be growing as a result of a bird dropping a seed somewhere. I have this image of the bulbs traveling underground in packs. Nice blog, Nancy. You are going to have me pondering this mystery all day!

My neighbor refers to hers as the "naked ladies." I have no idea why, but it really confused me the first time I heard her talking about them popping up in her yard all the time.

We don’t have them up north and by the time I get to Georgia, if they exist, they are gone. I loved seeing daylilies when I lived in New Jersey and New York, though others considered them weeds.

They are gorgeous! Do they always grow in a line? What a lovely, bold, surprise. The gift of fall to carry you through winter.