I Shouldn't Blog About This by Carla Damron

I shouldn’t blog here about political things. Writers Who Kill is about writing and reading, and other things that cross the quirky minds of us blogpeople. But really, we should steer clear of politics. You, the reader, may have different beliefs than I have, and I don’t want to offend you.
Which is why I shouldn’t post about the Brett Kavanaugh hearings. I shouldn’t talk about how compelling Christine Blasey Ford’s testimony was nor mention that I’ve worked with many survivors of sexual abuse and do you know how these victims look? They look EXACTLY like Christine Blasey Ford:  the shaky voice. The reluctance to come forward. The trauma symptoms that have polluted her life since high school. I probably shouldn’t mention that all this media exposure about what happened to her has triggered sexual abuse survivors all over the country to reexperience their own trauma symptoms. I’ve heard from some. I encourage them to turn off the news.
Instead, I should talk to y’all about this writing conference I’m attending: The Women’s Fiction Writers Association’s annual retreat in beautiful Albuquerque. About the great discussions on revision, and how they had an actual margarita fountain! (Okay, that’s not writing related. Or is it?) 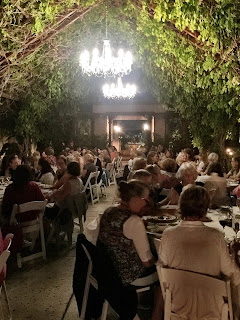 Hotel Albuquerque hosted us for the WFWA Retreat
The conference speaker, Jennie Nash, talked about showing-vs-telling and how important it is to avoid an info dump. Is dialogue used effectively? Speaking of dialogue, I probably shouldn’t mention how disturbing I found Kavanaugh’s demeanor when he talked. How his lack of composure and quivering rage made me question his ability to make reasoned, well thought out decisions as part of the highest court in our country. Or how troubling I found it that he actually used the same words as Clarence Thomas used to describe how he was being victimized by the process.
When we write a scene, what the character says is important, but what he’s actually thinking is what’s fascinating. (I wonder what the senators were thinking as they listened to the testimony? Some were so stone-faced, I wondered if they were breathing. Others were so contorted with rage I thought heads might explode.)
Resolution is important in women’s fiction, we were reminded at the conference. Not all the ends have to be tidied up, but the reader should close the book feeling satisfied.
I don’t feel resolved about the Kavanaugh nomination. They’re delaying the vote for a  week, and President Trump has requested an FBI investigation. I’m relieved about that. Any step we take to get closer to the truth is the right thing. What I think is true may not be what you think is true, but how can any of us feel resolved if we don’t bother talking to witnesses and exploring other allegations? This decision is almost irreversible. Let’s make it wisely.
Speaking of wise, I’m not being it. I’m talking to y’all about politics and may have even angered one or two of you. I apologize if I did. I can’t seem to stop myself.
My hope is this: whatever happens, we, as a nation, will heal. Emotions have run high in recent weeks (it’s horrific that both Ford and Kavanaugh have received death threats). We are as divided as we’ve ever been. Somehow, we need to come together again, to realize the values and liberties on which our country was founded still matter today. Maybe we can turn us vs them into simply, US.
Then, maybe, I can stop mouthing off about politics.
(You think the conference will have the margarita fountain tonight? Because after the week I’ve had …)
Peace, my friends.
PS I did a TV interview about this subject for WACH TV. I begin around minute 25. Go HERE to watch.

Carla, yes, it's been horrific for those of us who are survivors--and so many more are than people think. My Twitter and FB mentions are full of women (and some men) telling their stories of sexual assault that have impacted them forever, hundreds. I think the GOP are fooling themselves that this will all blow over without a real investigation, but what I'm hearing and seeing among these women (and men) is real anger, even rage, that isn't going anywhere without a true investigation and resolution.

You are so right, Linda. We have a long way to go, but the energy is there to get us moving.

It is for that very reason victims don't come forward--not being believed, and having to relive it over and over again in the retelling.

Thank you for sharing this. They say that mystery is the genre of justice. I think as readers and writers in that genre, we approach the daily news cycle with an eye for justice. And truth. May both be our guiding lights.

You're right, Grace.
Tina, Justice and truth MUST be our guiding lights, even is others disagree.

Carla, I'm with you on this blog. I'm fortunate that I never had to deal with this problem, but so many other women and girls have had to deal with it. I'm thinking that the Democrats may take over the house and senate this year if the Republicans put through Kavanauch for the Supreme Court. They certainly refused to put through Barack Obama's good judge for the Supreme Court until Trump got elected.

My father instilled in my sister and me such fear of unspecified assault which would, of course, be our fault because we were in the wrong place/dressed provocatively/exuded an air of solicitation (or just basically existed) that we were hard pressed to go anywhere or do anything out in the "real world."


Interestingly, I think it was that early fear of virtually everything and everyone that permitted me to function in some precarious situations. The whole world was so terrifying, yet we had to interact with it, that joining a questionable motorcycle club and later working with inmates in prisons and county jails seemed no more dangerous than sitting on my family's front porch.

My sister went into a convent as soon as she graduated.

An attention-grabbing dialogue is worth comment. I think that you should write extra on this subject, it won't be a taboo topic however usually individuals are not sufficient to speak on such topics. To the next. Cheers real money casino